An academic by training, Gideon Lasco does not limit his career to producing journal articles and book chapters. Beyond academia, he is a published author, hosts a weekly opinion column, is a trustee of Centre for Sustainability and the Philippine Center for Investigative Journalism.

Most recently, Lasco published his most recent book: “Drugs and Philippine Society”. Featuring 18 chapters of research, poetry, photographs and other recorded media, the book is a fantastic exploration into the role that drugs play within the nation.

Beyond being a critically incisive text, it has been published in a nation led by one of the most vocal opponents of a more tolerant approach to drugs and the people who use them. Rodrigo Duterte, the infamous president of the Philippines, has incentivised police killings of people who use drugs, and openly claimed responsibility for the murder of over 12,000 mostly urban poor Filipinos for their direct or indirect involvement with drugs. With presidential elections in May, Lasco’s Drugs and Philippine Society is a scathing indictment of Duterte’s authoritarian regime, and takes the first steps towards rethinking the future of drug policy in the Philippines and beyond.

Currently based in Mexico City, TalkingDrugs spoke with Lasco over Zoom in early 2022 on drugs, class, colonialism, COVID, and an imagined future for the Philippines. The conversation has been edited for brevity.

I wanted to start off by asking you about the motivations for writing the book, and why it’s so important to publish now.

Lasco: The book has been lingering in my mind since since the War on Drugs started in 2016 by the Philippine President Rodrigo Duterte, because I felt that there was a big need to challenge the official discourse around drugs, what the President is saying about them and the people who use them. It comes from my own work as a drug ethnographer, where I saw how drugs really play different roles in young people's lives. And such an understanding is in stark contrast with how the government has portrayed these young people as criminals, as addicts who are unworthy of life. So that was the starting point.

It was interesting to read how the Filipino government discourse isn’t necessarily drawing upon new forces. You talk about an “anti-drug hysteria” that had already been there before Duterte arrived. How did the Philippines then reach this point, where people that use drugs can just be murdered on the streets?

Lasco: Although I don't want to underestimate the evil that he is, as he's still ultimately responsible for all his actions and all his policies, I would also like to stress - and this is based on our historical research - that his presidency is a culmination of an increasingly punitive regime and increasingly punitive set of policies. If you look at the history of how drug crimes are penalised in the Philippines, you can see increasing lengths of imprisonment, increasing fines, and now they even want the death penalty.

At the same time, there's an underlying societal attitude about drugs that he fed on for his political gain. We see this in the radio: one of the chapters in our book talks about how various media reporting mirrored and echoed this perception of so-called drug addicts as criminals. One of the writers in the book explored how the Catholic Church reflected a moral panic around drugs from the 1970s onwards. Different domains of society must reflect on how they have unwittingly participated in building this whole drug regime.

You believe this has really been unwittingly? That the discrimination of people who use drugs was not organised or intended?

Lasco: I don't think it's something that was necessarily systematically organized; I think that it's politically motivated, and will appear as a populist performance. If you're a politician and you say that you're tough on drugs and crime, then there is political power in saying so, just like in other parts of the world. So there are many politicians, not just Duterte, who have used drugs as a platform. Duterte is just the latest.

But even now, with the elections coming up on who to replace him, some of the people who are running are likewise pirating his discourse around drugs, which means that this is definitely not an exceptional moment, it's a recurring theme in Philippine politics that people use to boost their political capital. 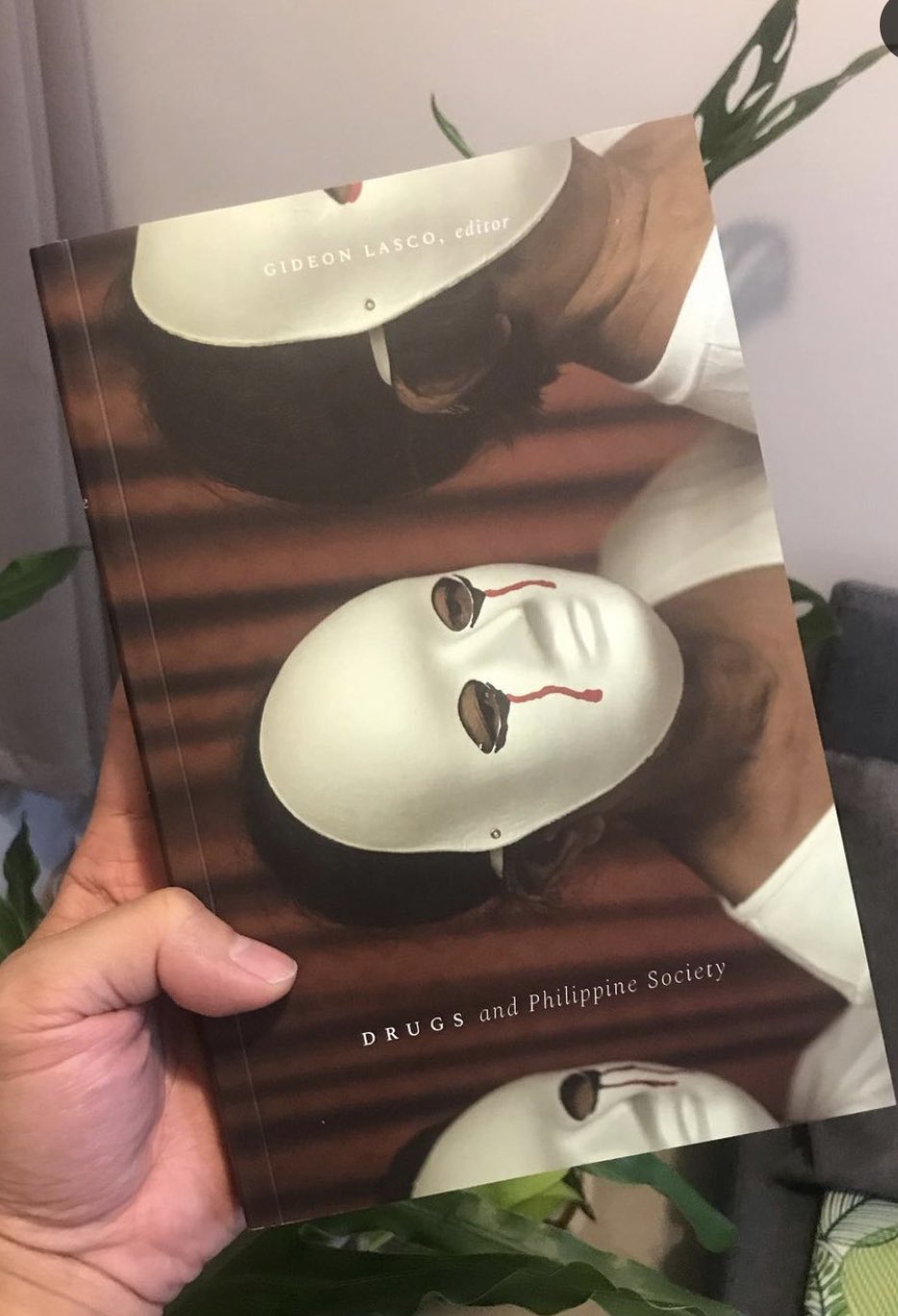 The cover of Gideon's new book

There’s a common class element around anti-drug sentiment and on the condemnation of drug use. Is drug use in the Philippines a primarily lower class behaviour, or is there a division between accepted kinds of drug use?

Lasco: What we're seeing is there is drug use across all society. People who are, for example, in Manila today, young professionals who are middle class and upper class who are using party drugs or chemsex, that's not vilified as much - you won't feel that you'll get killed if you're using these drugs. The drug war has primarily been against methamphetamine. And it's primarily against urban poor communities who are at the mercy of these police officers who implement this campaign. So even though drug use is across society, the people who are bearing the brunt of this campaign are the ones who live in urban poor communities.

Even with the pandemic, for example, the rules that are implemented in the name of public health have impacted the poor the most. They're targeted because they're convenient targets. Even societal attitudes against the poor, combined with societal attitudes against drugs, means that these people will not receive outrage when they are persecuted. People really think that they're dangerous to begin with. People think that they don't belong to the city, even though we know that cities need them more than they need the city. The economy needs these poor communities because that's where they get cheap labour from. Many of them resort to drugs like methamphetamine so that they can work these difficult hours, so that they can stay awake longer, so that they can have more energy. They all feed into each other.

You briefly talk about this in the introduction for your book, but I was wondering whether you could expand on how colonialism plays into the public and popular attitudes towards drugs?

Lasco: That's a very interesting question that frames the whole issue historically, which I think it's very important, especially in the Philippines. It's actually an American Bishop, Reverend Charles Brent, who by all accounts inaugurated this whole global drug regime beginning in the early 20th Century, where he talked about opium in the Philippines and how it's destroying people. And that set the theme for drug prohibition for over a century. So the Philippines is definitely at the heart of this colonial history of drugs. I do think that in many ways there's a big relationship, because many of the class problems and the inequality in the Philippines started with the colonial system. There still are lingering consequences of colonialism.

Even harm reduction is discussed as a neo-colonial intervention in the Philippines, which is why having local evidence about drugs is very powerful. Many politicians would say: “How can you talk about harm reduction? You always mention Portugal, you always mention Vancouver, these are first world countries, they don't apply to us". For example, Carl Hart, the Columbia University author who came to the Philippines to talk about drugs, was dismissed by Duterte: "Look at these people, they come here and they don't know what's going on in the Philippines." So local evidence would really matter in that regard.

How has coronavirus generally impacted the war on drugs in the Philippines?

Lasco: The government has used coronavirus as a pretext to prevent any kind of protest, any kind of activism. Because of the so called public health measures, many NGOs are not able to operate as well. So, there's very little civil society action that has been done. And I believe it's been detrimental to monitoring the drug war and being vigilant about what's happening. At the same time, the same communities that have been affected by the drug war the most are the communities that have been on the receiving end of these public health measures that, for example, they can't work because they've shut down the economy, they can't take public transport because they've shut down public transport.

Do you think there are similarities in the way COVID restrictions have been enacted similarly to the way that public health motivations were used to control drug use or to justify the War on Drugs?

Lasco: Yes, definitely, both of them can be explained through the neoliberal paradigm that looks at individuals as responsible for their health and wellbeing. We see how in the same way that the so-called "drug addict" in the Philippines was cast as the enemy of society for the drug war. In COVID, we see the person who was disobeying the rules and not following the public health protocols as the culprit for this pandemic, even though it's ultimately the primary responsibility lies on the government. In the face of the drug war, it's the government that failed to support these communities; the government has failed to support them in terms of economic interventions, in terms of health, in terms of education, and now they're blaming these young people for using drugs.

You told me that you aimed to publish the book before the upcoming elections. What is the legacy of the anti-drug discourse, and the fact that Duterte’s daughter may be running for president?

Lasco: Duterte has lowered the discourse so much that it's become a matter of whether to kill or not. So that's the debate. The campaign issues now are whether we should murder, drug war or not. And as a result, the complexity of a drug paradigm, of different drug policies, the nuances of rehabilitation, are not being discussed. Because we're still at that level where we're debating whether these people need to be killed or not. Things like harm reduction or criminal justice reform, which is very important as our jails are overcrowded, we’re not even talking about this.

That's what we hope to challenge over the next months, we hope to bring back these issues and tell these candidates that yes, it's good that you're not condoning killing people… But that's not enough. You need to tell us what your plans are on how you would define rehabilitation: is it more of the same, which is forced rehabilitation and compulsory detention? Are you open to different approaches?

I wanted to end on a positive note: your final chapter talks about reimagining drug policy, and a strong imagination is so important in our field. What kind of future can you and your other contributing authors imagine for the Philippines?

Lasco: Well, if there's one good thing that's come out of this drug war is that people are talking about drugs more than any other time in history in the Philippines. People are recognizing it as an important issue. Without Duterte's drug war, a university press may not have been interested in publishing a volume like the one that we put up. So the fact that there's interest in drugs, both at the academic level, and also in civil society means that there's an opportunity to build on for the future. The community of people who are concerned about this is larger than it's ever been.

I think that we cannot lose hope, because Duterte's regime is almost over. And there might be a new president, but regardless of who the President will be, just having this out there to show that people are reacting and that there's a different way to look at drugs is a positive step, I believe. And I hope that it will enable more discourse around this, and enable more discussion in the coming years.