Canada: Decriminalising Drug Use Is A Necessary Step, But It Won’t End The Opioid Overdose Crisis Media, policy-makers, advocates and the public claim that decriminalization will make drug use safer and save lives. But can it?

Decriminalization has been somewhat of a policy buzzword in recent years, with ample media coverage. It comes with both public and government support.

A 2020 survey of more than 5,000 Canadians showed that the majority (59 per cent) favour the decriminalization of drugs. The Canadian Association of Chiefs of Police has also publicly supported decriminalization, along with British Columbia’s chief public health officer.

Such support has also come with action. This year, the City of Vancouver submitted an application to Health Canada for an exemption from Canada’s Controlled Drugs and Substances Act — a policy reform referred to as the Vancouver Model of decriminalization.

In the simplest terms, decriminalization is an alternative response to criminal penalties for simple possession. The most recent data shows there were over 48,000 drug-related offences in Canada in 2019, most of which were for possession for personal use.

The criminalization of drugs results in significant health, social and economic harms, particularly to those who are homeless, experiencing mental health issues, racialized or Indigenous. By eliminating a criminalized response to drug possession, drug policy reform efforts can minimize the contact between people who use drugs and the criminal justice system, and may increase their connection to health and social systems.

However, alongside recognition of the ineffectiveness of criminalization and support for an alternative model, we need to be realistic with our expectations of what decriminalization can do.

Decriminalization does not mean that people can buy cocaine and heroin at the store as they would alcohol and tobacco. Only legal regulation can do that. Legal regulation, which drug policy advocates endorse , includes rules to control who can access what drug and when, as opposed to a free market or full legalization.

An example of legalization is Canada’s Cannabis Act, which provides a legal framework to control the production, sale and possession of cannabis.

Unlike legal frameworks applied to the supply of drugs, decriminalization does not promote a “safer supply” of drugs. The overdose crisis is driven by an unpredictable, illegal drug supply that is marked with adulterants, contaminants and other substances. Decriminalization won’t directly impact this supply of drugs, they will continue to be made in unregulated ways and places.

That said, decriminalization is still a necessary step in addressing the crisis. 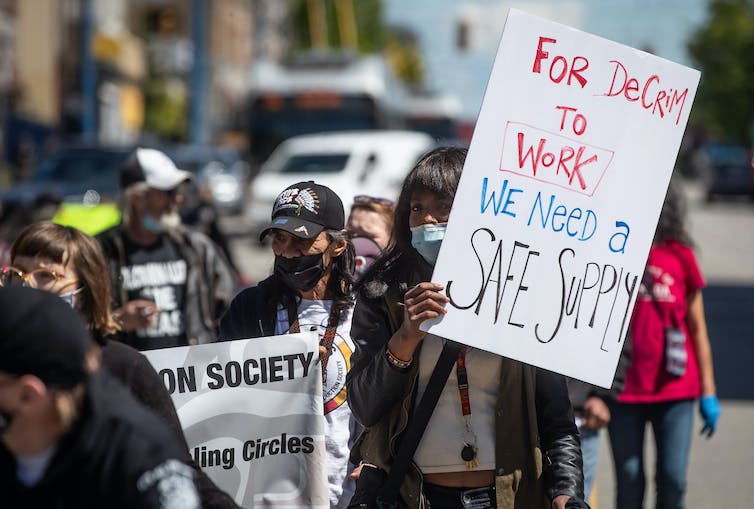 Advocates are calling on the federal government and the City of Vancouver to halt the march toward possible drug decriminalization in the city, saying that addressing the drug supply is also crucial. Source: THE CANADIAN PRESS/Darryl Dyck via The Conversation

The benefits of decriminalization

Decriminalization changes the way we think about drugs. Drug use will no longer be treated as a criminal issue, but instead a health and social one. This means that instead of addressing drugs through handcuffs, the focus will be on the root causes of drug use, including inequities rooted in housing and health care.

Decriminalization saves governments money. A large proportion of the justice system — police, courts, prisons — are occupied with drug-related crimes. As seen in other decriminalized jurisdictions such as Portugal, it can reduce the demands and costs to this system.

Considering the demonstrated need for addiction and mental health resources, the money saved could be well spent elsewhere, such as community-led responses, health care, housing and social programs.

Decriminalization positively impacts people’s lives. Especially for those targeted by drug law enforcement, namely poor, homeless and racialized people who use drugs, decriminalization can have a positive impact.

For example, eliminating criminal records related to drug possession offences promotes opportunities for people to access employment and housing. Interactions between people who use drugs and police can also be reduced or, better yet, won’t happen at all.

Decriminalization reduces stigma. Negative views towards drugs and people who use them is a major factor in the overdose crisis. By reshaping the way our family, friends and the medical profession think about drugs, drug use can be talked about more openly and honestly.

Reducing stigma can also encourage people who use drugs to talk to their doctors about prescription-based therapies. At the very least, it will help bring drug use out from isolation, where fatal overdoses tend to be the highest.

Decriminalization encourages people to call 911 at the scene of an overdose. Fear of police is currently a barrier to this. Although people cannot be charged with simple possession at the scene of a drug overdose under drug-related Good Samaritan laws, fear of the police is still a deterrent. Legislation that decriminalizes drug possession can reassure people that they will not face criminal penalties. And police will no longer need to respond to calls about overdoses.

Decriminalization is harm reduction. Although some people fear that decriminalization may increase or encourage drug use, this concern is simply not supported by evidence. We know from dozens of countries, states and cities that have decriminalized drugs that use does not significantly increase. In some places, it has actually decreased.

Decriminalization also lowers overdose and disease rates, while increasing people’s access to social services and health care. In this way, a decriminalization model is a basic harm reduction approach, mitigating the harms experienced by people who use drugs by eliminating or minimizing the source of those harms: criminalization.

Overall, the notion of decriminalization is not a panacea or a standalone solution to the harms of drug prohibition — but it is a critical step in the right direction. It will have a positive impact on the lives of so many people who are harmed daily from criminalization.

However, in recognizing the limitations of decriminalization models, governments and other stakeholders can refocus efforts on what does directly impact the overdose crisis: a safer supply. Decriminalization must be paired with greater access to safer pharmaceutical alternatives to the toxic and illegal drug market.

That’s what will save lives.