In The World's Forgotten Borderlands, The Drug Trade Helps People Survive – But At A Cost When Jangul’s* village on the border between Afghanistan and Pakistan was bombed in the war between the Soviet communist regime and the Mujahedeen in the 1980s, it was some opium buried under his house that enabled him to build a new home.

Then, in the 1990s, when he was jobless and without means to feed his family, a friend’s cousin offered him a good sum of money to smuggle heroin from Afghanistan to Moscow. It was a treacherous and risky journey, but one with a good pay out that allowed him to open a small shop at the bazaar.

Jangul’s story is one of many gathered during our research in border regions of Afghanistan, Colombia and Myanmar. These testimonies demonstrate how illicit drugs and conflict have become deeply embedded in the daily lives and livelihoods of borderland communities. 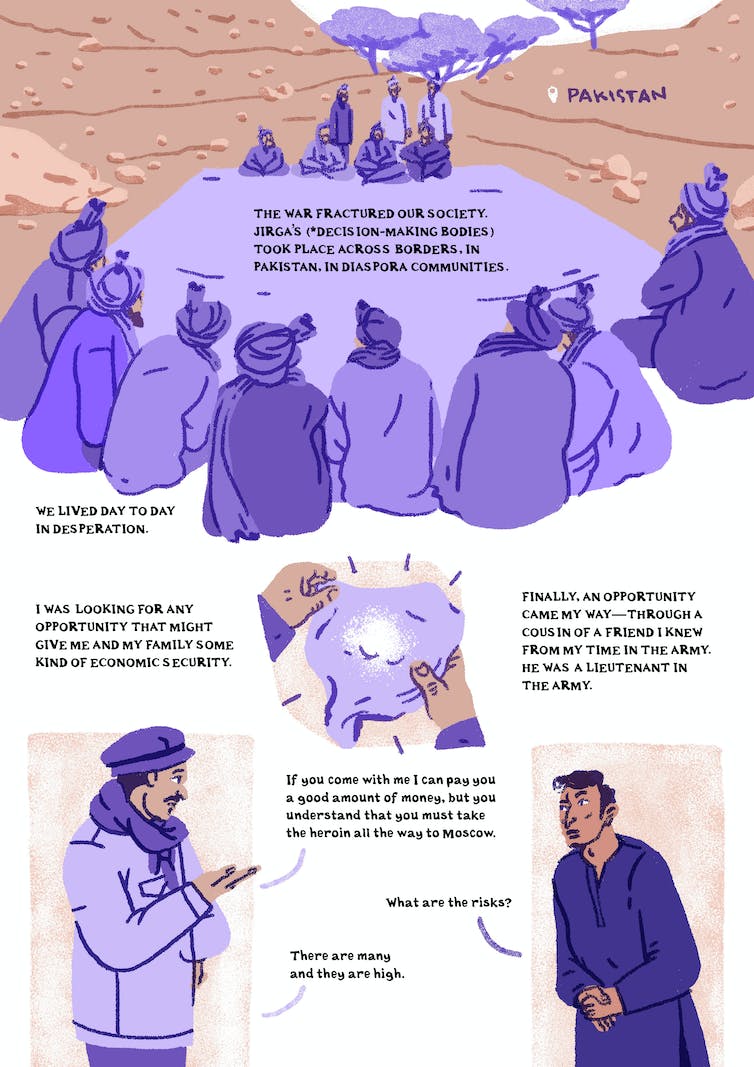 They also show how deeply flawed conventional assumptions are that illicit drugs are always counter to development and peacebuilding, or that economic and social development will automatically dismantle illegal drug economies and provide a foundation for peace.

In reality, illicit drugs can actually contribute to coping, survival and even social advancement. Meanwhile, government and international development efforts may push people into a closer engagement with the drug trade. Counter-narcotics programmes in some of these border regions may also actually undermine progress towards the UN’s Sustainable Development Goals.

In Colombia’s borderlands with Ecuador, we heard stories of coca farmers and pickers using their coca income to access basic services, and to invest in education and community projects such as road or bridge building. As one farmer told us: “The state has abandoned us, and we survive with the coca bush because we have to.”

In Myanmar’s Kachin and Shan states on the country’s borders with China and Thailand, we heard how drug consumption has grown in the wake of ceasefires and amid forms of state economic development. An elderly man in Kachin state pointed out:

After the ceasefire … road construction started, then the logging started in the area. The heroin started coming in when the area became more populated. Then the local youth started using different kinds of drugs.

The borderlands – which straddle two or more countries – are often the first areas into and the last out of protracted armed conflict. They’re also transnational hubs for illicit drugs and activities, with relatively easy access to lucrative foreign markets. And they are home to some of the poorest and most vulnerable communities in each area we studied.

Yet development donors are often constrained by thinking that focuses their efforts on individual countries rather than those that border it too. Such approaches lead to what my colleagues and I call borderland blindness – a failure to sufficiently understand, appreciate and engage with borderland regions and the communities living there.

This can also lead to a failure to take into account the multiple forms of violence experienced in borderlands after peace accords have been signed. These range from continued large-scale violence involving government forces and non-state armed groups as in Afghanistan, to the violence associated with counter-narcotics policies and interventions in Colombia, to exploitative labour practices and extensive drug abuse in Myanmar.

Meanwhile, government efforts to rebuild states after war and boost economic development frequently find it hard to gain a foothold in the borderlands. And when they do, they can work to the disadvantage of borderland communities. For example, we found the insertion of oil companies in Colombia’s borderlands and commercial agriculture in Myanmar’s has been associated with land grabs and displacement of borderland communities.

Nonetheless, governments continue to frame better political and economic integration of borderlands as key to addressing illicit drug economies. But our research suggests that the drivers of the illicit economies in the borderlands are less about a lack of integration between the centres and the margins. Instead, the drivers are more about the ways forms of integration – through for example investments in infrastructure or border management – are imposed on the areas.

Win-win solutions are an illusion

The relationship between counter-narcotics, development aimed at moving people out of poverty, and peace-building initiatives is neither straightforward nor necessarily complementary. There are trade-offs between policy objectives and it may not be possible to design interventions that do no harm. A more realistic approach may involve mitigating harms and avoiding policies that directly lead to violence and poverty.

This can only be done by actively engaging with people living in the borderlands to understand why they engage in the drug trade. This could be done by building partnerships with social and political groups that represent or are composed of marginal groups – including those involved in the drug trade.

Like Jangul, many people involved in illicit economies in borderlands affected by drugs and conflict make really tough decisions every day. They make Faustian bargains in which short-term survival may come at the cost of long-term health and security. We must avoid policies and programmes that make these trade-offs even more difficult to manage.

This article is republished from The Conversation under a Creative Commons license. Read the original article.  Names in this article have been changed to protect the anonymity of the research participants.