"Drugs are not only a menace to the health of all French youth - it's equally a nihilist pitfall and an instrument of enslavement.” Source: Argos

A far-right French youth group protested at one of the only drug consumption rooms in France in early December, condemning its support for self-destructive activities, and proclaiming their vision of a zero-tolerance for drugs in France.

According to Le Parisien, a group of approximately 50 individuals belonging to the youth collective Argos congregated in the early morning hours around Gaia, the drug consumption room (DCR) in the 10th arrondisement in Paris. With flares and a banner reading “Governors accomplices of drug traffickers”, they poured fake blood from syringes on the floor, chanting “youth [is] anti-drugs”.

In a statement on social media, Argos stated their actions (video here) were to signal their total opposition to the state’s abuse of power, which is institutionalising a drug culture on French soil.

“Faced with an explosion in crack use, the state prefers to capitulate and create spaces for self-destruction instead of fighting this scourge”, reads their statement in French. “Drugs are not only a menace to the health of all young French people – it’s a nihilist pitfall and an instrument of enslavement.”

“The proliferation of the drug culture in Europe (aided by uncontrolled immigration) is systematically consolidated by an ever-stronger enterprise of organised criminals within our territory and within our lives. The Netherlands is a flagrant example of the deadly influence that “dope” has on our national politics. Argos incarnates a youth that refuses to see France fell to the hands of narcotraffickers and their complicit politicians.”

“Argos opposes this project that destroys the youth and affirms its determination to fight the transformation of France into a narco-state… Against the nihilist deliriums, it’s time for you to raise your head and join us!”

The Parisian DCR opened in 2016 after a prolonged struggle and much public debate. Another DCR, ironically also called Argos, opened in Strasbourg in the same year after its mayor identified a serious health and social need for its presence. However, since their implementations, local fears about “addicts” and migrants coming into the neighbourhood are common in media outlets, legitimising the actions of right-wing reactionary groups like Argos. 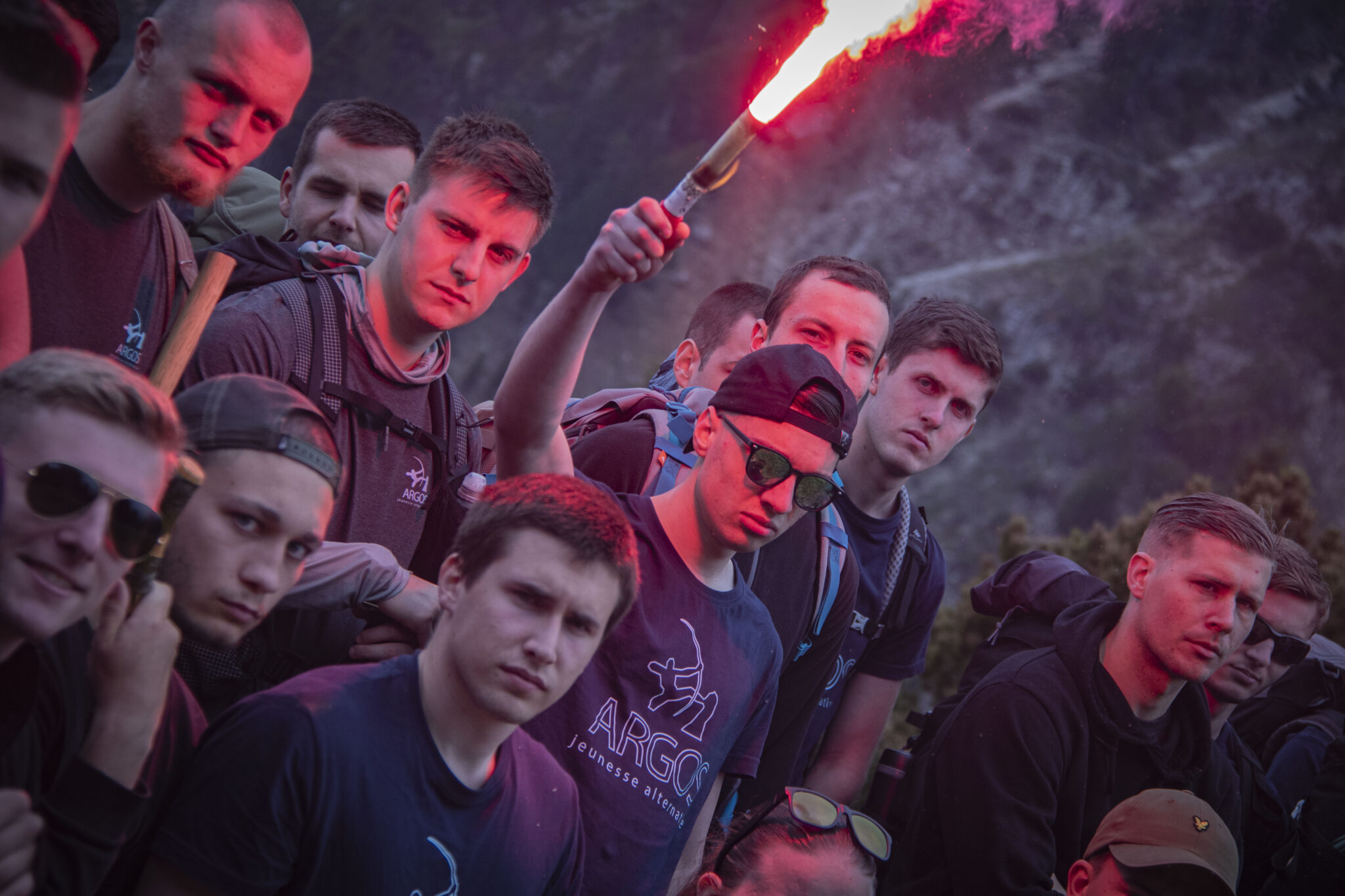 Photos of Argos' actions in the wild. Source: Argos

According to their website, Argos brands itself as a youth movement of “heroes”, composed of youth that are “not satisfied with the surrounding mediocrity and the cult of guilt” that surrounds European youth. Their goal is to restore the “thousand-year-old European culture, the only one capable of regenerating our society”.

In an interview with one of Argos’ co-founders, they define themselves as a “communitarian collective”, looking to build youth support for a new alternative: one of their slogans is a “healthy mind in a healthy body”.

The co-founder also stated that former members of the Génération Identitaire (GI) had been integrated in Argos’ structure. GI was the youth wing of the far-right group Bloc Identitaire which routinely protested or occupied mosques, and campaigned for the remigration of non-European migrants from the continent. They were also part of the Defend Europe fundraising project which aimed to rent a boat to stop NGOs from saving refugees crossing the Mediterranean. GI was disbanded by decree from the French government in 2021 due to their incitement of “discrimination, hatred and violence”.

Claiming superior moral ground, Argos states they are waging war against the “defenders of decline, the guardians of collapse, and the supporters of mediocrity”, who submit themselves to other civilisations, at the detriment of European greatness. While denouncing political allegiance – as they supposedly do not engage in the “boring hum of politics”- their discourse is widely embedded in the wider narrative of the new right in France, which amalgamates concerns around deindustrialisation, immigration and cultural progress into a reactionary and fearful right-wing movement.

The far-right’s opposition to drugs

Argos’ zero-tolerance for drug use, and their employment of pathologizing discourse of a “healthy” body being poisoned by drugs are common prohibitionist tropes, where drug use is framed as a moral and social failing. The claim that drugs are instruments of enslavement or self-destruction build on the idea that there is an assault on the sovereignty of the body, spirit and the nation; and losing control to a foreign substance or power is what has led to national “mediocrity” which they so strongly condemn. This construct is aided by the current French drug policy laws, established in 1970, that perpetuate the view that drug use is a moral vice, where individuals have become “slaves” to their uncontrollable desires.

While DCRs are actually a great way to ensure that bloodborne diseases and hazardous waste do not spread in uncontrolled manners, it is easy to portray their existence as simply facilitating something that ultimately should be eradicated from society.

“Protests against drug use are common on the extreme right as it is seen as a way to control the population and more traditionally as a failure to uphold the purity of the race,” Aurelien Mondon told TalkingDrugs, Professor in Politics specialising in the mainstreaming of French far-right discourse.

Groups like Argos, Generation Identitaire and other race-based movements in France borrow a lot of their ideology from the “Nouvelle Droite” movement, established by right-wing French thinkers in the late 1960s who lamented the loss of the European culture and identity, a myth of constructed pan-European unity just as fictitious then as it is now.

As a reaction to demographic changes, these groups increasingly take ultra-nationalist stances: both Argos and Generation Identitaire call for a return to a culturally homogenous Europe, scapegoating modern socioeconomic struggles of economic precarity, political polarisation on non-white immigrants.

On Argos’ actions, Mondon commented: “Drug trafficking is also often linked to immigration and therefore taps into traditional forms of discourse on the extreme right (which is very much the case here).”

Racism and xenophobia are common features to the French far-right ideology, which calls for the strengthening of the European identity in the face of foreign invaders. Drug trafficking becomes a vehicle for far-right opposition to immigration: drugs must be brought in by immigrants to damage the French state, rather than as a result of French demand for them.

While there are few studies into French public sentiment towards DCRs, a 2020 study highlighted that there was significant support for rooms staffed by health specialists that provide rehabilitation support if needed. Another study conducted into the public discussions around the opening of the very same DCR being protested by Argos in Paris demonstrated that, when pushed, the majority of DCR opponents agreed that they were a great health intervention, but they just didn’t want it in their neighbourhood.

The actual evidence around public opinion for DCRs show a mixed picture, as is often the case with complex and new policy proposals. The appeal of groups like Argos and other reactionary movements is that they offer a simple explanation for many societal problems: it’s the drugs and the immigrants that are ruining everything. It’s worrying to see health interventions portrayed as a decay of the French spirit, and more public education work needs to be done to demonstrate how DCRs are in fact addressing deeper societal ills than these groups would like to admit.