Buying Drugs on Social Media: A Form of Harm Reduction? Despite growing concerns about young people buying drugs through social media platforms, there is reason to believe that such access may reduce the risks they take when buying and using drugs.

A newly-published study by the International Journal of Drug Policy, #DrugsForSale, has explored the rising trend of social media being used for illegal drug sales. The study involved an international online survey of 358 people – primarily from the UK, Australia, Canada, and the US – who have used, or considered using, social media apps to buy illegal drugs. 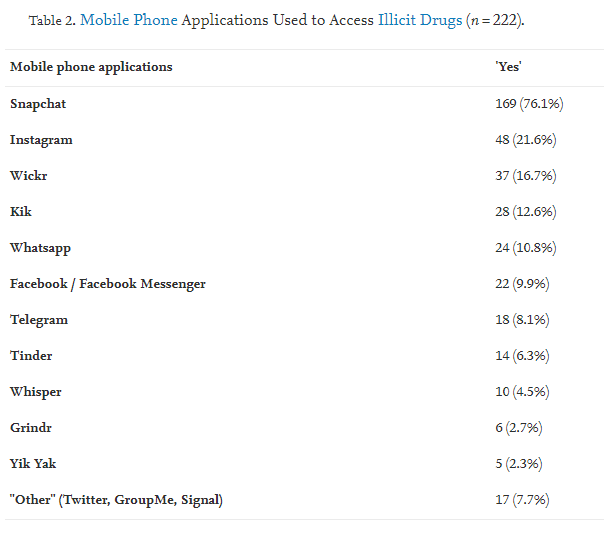 Buying drugs from ‘dark web’ sites has seemingly fallen out of favour with young people, partly due to the heavy law enforcement crackdown on such sites, and because of the complicated process of accessing such markets and using cryptocurrencies.

“It just seemed like a simple, modern way to buy things. I’d gotten pretty sick of the darknet because I never really got it, so had to always have a friend on hand to help me out. With apps it’s super simple; in no time I’ve managed to connect with strangers who I would’ve never been able to access before. Plenty of dealers in this area exist solely on Snapchat, so without it I would’ve kept relying on people approaching me in the street or randomly bumping into people in clubs.”

Alongside the increased ease of buying drugs, and the avoidance of potentially risky encounters with people dealing on the street, using apps can allow buyers to have a better understanding of what they’re getting in advance. Buying drugs through apps allows people to see photos and videos, sometimes in a livestream, of the products that they are purchasing.

“The first time I bought Xanax it was through Snapchat because I could watch the dealer opening sealed packets on his story before he sold them and I therefore felt safe consuming them… I would never buy anything I hadn’t tried before from some guy on a street corner or anything at all really unless I was desperate.”

As people who buy drugs may often judge their purchase through their expectation of its colour, texture, smell, or structure, seeing instant images of the drugs – in advance – can be a great benefit of buying via social media, particularly when compared to making quick purchases on the street.

Despite such apparent benefits of this relatively new approach to buying drugs, serious concerns remains.

Watching sellers unpackage or prepare drugs on apps in real-time, or reading positive “reviews” in comment sections, may lull buyers into a false sense of security. Due to prohibition, all illegally-sold substances may contain unexpected adulterants and are therefore inherently risky to consume. This risk could be mitigated by wider access to drug checking facilities – an approach that is growing, but still limited, in the UK, Canada, and Australia.

It is essential for people who use drugs to be informed about what they use, and buying through apps can – to an extent - help improve their knowledge. Nonetheless, serious risks remain when buying illegal drugs from any source.