Drug Checking in Latin America: the Countries Leading the Way Drug checking at UK festivals has made unprecedented headway over the past year and garnered significant media attention along the way. While relatively new domestically, these initiatives have a longer history in other countries, as the experience in Latin America highlights.

Across at least five countries in Latin America, civil society groups are providing harm reduction services in nightclubs and festivals. Several of these include drug checking services like those offered by The Loop in the UK, which allow people to better understand what is in their drug and what the risks are. As it stands, drug checking services are available in parts of Brazil, Colombia, Uruguay and Mexico, all countries in which the use of amphetamine-type substances has increased over the last decade.

We’ve been following some of these trends for Harm Reduction International’s upcoming Global State of Harm Reduction report, which is due out late 2018. With concerns about the purity and adulteration of pills ever present, one standout from our research has been how communities are responding.

Colombian NGO Acción Técnica Social (ATS) is just one example. In 2012, the group launched Latin America’s first drug checking project at festivals and raves, under the name “Échele cabeza cuando se de en la cabeza” (“Use your head before it goes to your head”). To date, ATS have tested over 4,200 samples of MDMA, cocaine and new psychoactive substances, published 40 early warnings and served 65,000 people at 140 events.

These numbers are impressive in scale, but more importantly ATS is having a real impact protecting people’s health. From 2012-2017 the organization saw a 25 per cent reduction in adulterated samples and a 50 per cent reduction in emergency room visits due to drug use at parties in Bogotá, which they attribute to their programme encouraging safer drug use. 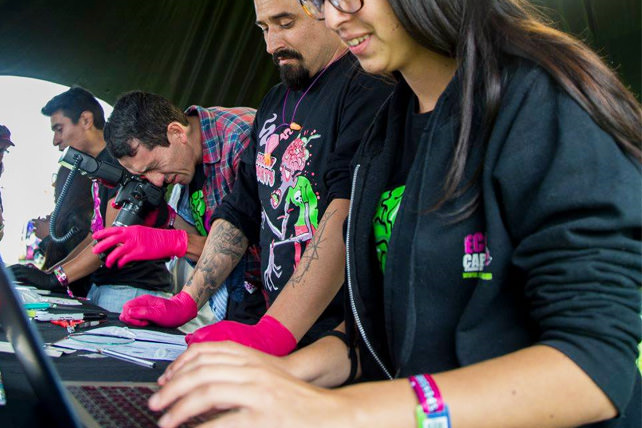 ATS Director Julian Quintero, said “The main lesson [from our work] is that it is possible to consume drugs with less risk and less harm. We’ve learnt that big changes don’t come from politicians or government, but that it is possible to use the law to our benefit and for public institutions to be our ally. We have also seen that we can affect the illegal drug market, with regard to the quality of drugs.”

“We want people to take this experience [with harm reduction] and to advocate for reform towards a drug policy based on respect for individual liberties, public health and human rights.”

Of course, harm reduction in party settings does not begin and end with drug checking, but also with other measures which help create a safer experience for people who use drugs. In Argentina, for example, the government funds a project run by Intercambios offering educational flyers, free condoms and hydration points at festivals and raves in Buenos Aires. In Uruguay, the National Drugs Board funds specialised staff training for harm reduction, awareness raising campaigns and hydration points at bars and nightclubs.

In both cases, though, and indeed across the region, governments won’t financially support drug checking services. This is despite the evidence that they remain one of the most effective ways to reduce the harms associated with illicit drug use. Such funding will likely be necessary in the long-run.

“Our next step is to survive,” says Quintero of the challenging funding environment. “We have learnt that the fight has hardly begun. The more we threaten [drug prohibition], the harder it attacks us. The government does not provide resources for our projects, and the international organizations do not consider them a priority. Not having the resources stops us from improving our technology, from educating our peers and from innovating with our service.”

“We need to continue to find financing to go to those places where they cannot pay for our services, but where they need us.”

The dangers that come with the absence of drug checking services are sadly apparent around the world. Preventable tragedies at festivals are to be expected because people don’t have the right information at hand. Last month, this was underscored in the UK with the preventable deaths of two young people at Mutiny Festival, a site without drug-checking. There is abundant evidence on what needs to be done to keep people safe when using drugs in party settings. It’s time to put these initiatives into action.

This is the second in a series of TalkingDrugs articles being published in the run-up to the release of the Global State of Harm Reduction 2018. Read the first here.