How COVID-19 is Changing the UK Drugs Market As borders close, the supply and distribution of most drugs is being restricted – but particularly those that rely on ingredients sourced in China. We are already hearing reports of reductios in the supplies of “Spice”, for example, the synthetic cannabinoid which is often imported from that part of the world. There are also bound to be problems further down the distribution network. The edict to stay at home will be affecting the ability of city-based dealers to carry out “county lines dealing”, where they push their product into smaller towns and rural areas.

Previous heroin “droughts” in the UK and Australia have been accompanied by temporary falls in deaths, as people reduced their use or substituted with alternatives that were less lethal in an overdose. But more recently, we have seen significant increases in deaths from the synthetic opioid fentanyl in North America, so we must be alert to the possibility that UK dealers and users will turn to this dangerous substance as heroin supplies dry up. As fentanyl is significantly stronger than heroin it is easier to store and move around due to the smaller quantity required.

Even where a user knows they have bought fentanyl rather than heroin, titrating a safe dose is challenging and this might only become apparent when it’s too late. The UK already has the highest rate of drug-related deaths in Europe, and the danger now is that the rate may climb even higher.

The government is continually stressing that it is led by research evidence in tackling the COVID-19 pandemic, but this doesn’t extend to acting on its advisers’ own recommendation that it should set up drug consumption rooms to reduce the number of deaths from overdoses. It’s difficult to imagine a more important time to heed this advice.

Another kind of panic buying

Now that we are all self-isolating, a perfect set of ingredients come together: anxiety, boredom, escapism and loneliness. All of these are candidates for self-medicating with more drugs – as are the abrupt change of routine and being cooped up with family.

Just as we’ve seen people panic buying toilet rolls and paracetamol, consumers of recreational drugs will, if they have the means, stockpile their drug of choice. More than 1.5 million people are regular users of drugs in England and Wales alone, and the surge in demand has already seen reports of the price of drugs escalating.

Stockpiling might lead people to take more drugs than usual. If they are dependent and subsequently can’t source the drug, they could suddenly end up with a withdrawal problem. This increases the risk that they will try a substitute drug, which again makes it more likely that they will come to harm since they may not be used to the drug or know what a safe dose should be.

The European Monitoring Centre for Drugs and Drug Addiction recently issued some general advice to users on reducing harm during the spread of coronavirus. This was welcome, but it didn’t say anything about the risks from drugs themselves at this time.

We are talking about a market without any quality control or regulation, in which consumers have no idea of the strength of their drug from dose to dose or which chemicals they are exposing themselves to. Mirroring the lack of testing for COVID-19, there’s no routine testing for drugs in the UK and many other countries – other than, say, at certain music festivals.

Public Health England has asked frontline agencies to alert them to examples of drug substitution or contaminated product. Gathering this intelligence makes sense, but is of little benefit unless it is communicated directly to those at risk. This could be viewed by some as a government agency condoning drug use, so it is unlikely to do so directly.

There is already a similar process for problems with prescribed drugs, as the Medicines and Healthcare Products Regulatory Agency alerts pharmacists, general practitioners and others involved in prescribing or dispensing these drugs to any hazards or emerging risks.

In the case of illegal drugs, the obvious network for feeding back equivalent information is the specialist drug treatment services. Unfortunately, that network has shrunk significantly over the last decade because the government has savagely cut the treatment budget. Even then, this network doesn’t reach the majority of people with drug problems, as they are not in treatment. For obvious reasons, such people guard their identity. 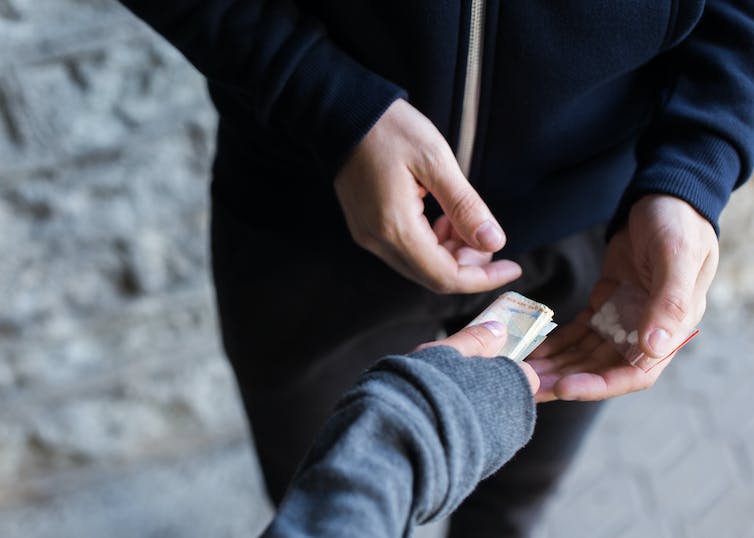 The bottom line is that we need to be smarter and better informed about this large but hidden part of our economy. The pandemic is exposing how little we know, and our inability to protect the significant number of people involved in it. There are persuasive grounds to change our policy approach to drugs, including the potential to reduce the harms done by either no longer criminalising users or even legalising sales and reaping the tax revenues.

“Doing what it takes to protect people” has to include everyone – not just those we morally approve of.