How Much Does it Cost to Criminalise People Who Use Drugs? The criminalisation of people who use drugs in the Eastern Europe and Central Asia (EECA) region imposes a massive social and financial burden on governments, despite states’ purported support for public health and social services.

On average, the amount spent by states on incarcerating a person for drug offences is between two and six times more than the money spent on providing health and social services to someone who uses drugs. This is evidenced by the results of a study conducted by the Eurasian Harm Reduction Association (EHRA). The organisation collected data on incarceration costs of people who use drugs from countries of the EECA region as well as data on money spent by the state on harm reduction services. 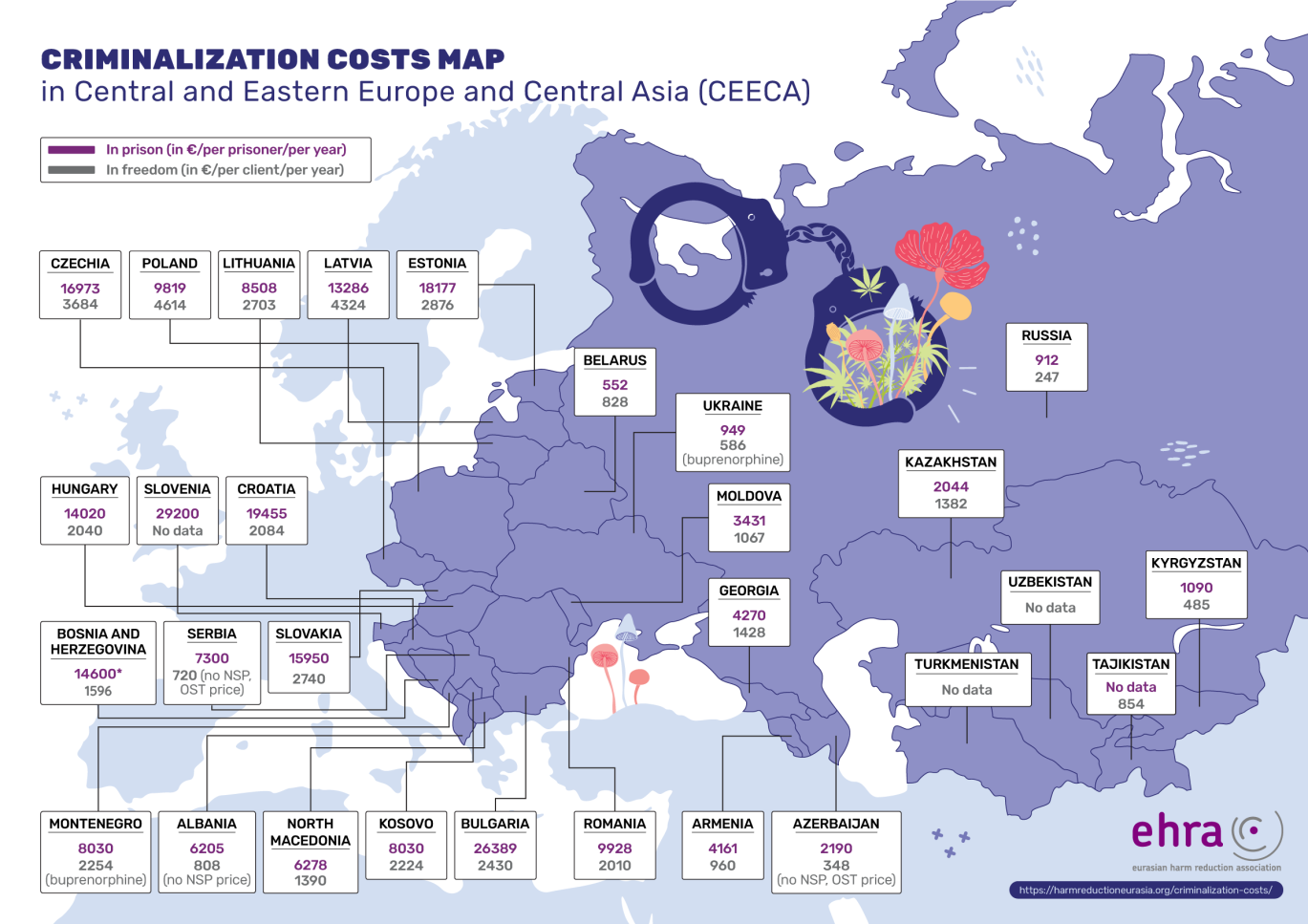 The study suggests that in almost all EECA countries, harm reduction and other health services are extremely underfunded by the state and depend on international donors. Due to the criminalisation of people who use drugs, these services are usually not a priority and therefore insufficiently funded by governments.

In Bulgaria, the cost of detaining one person who uses drugs for a year is €26,000 - more than any other country in the region, bar Slovenia. Conversely, the government spends just €2,400 per person per year for drug treatment and harm reduction programmes. There are no harm reduction programmes – such as needle and syringe programmes (NSP) or opioid substitution therapy (OST) - available to people in prison in Bulgaria. The figures show that the cost of detention in Bulgaria is almost 11 times more than the current cost of health care and social services for people who use drugs. 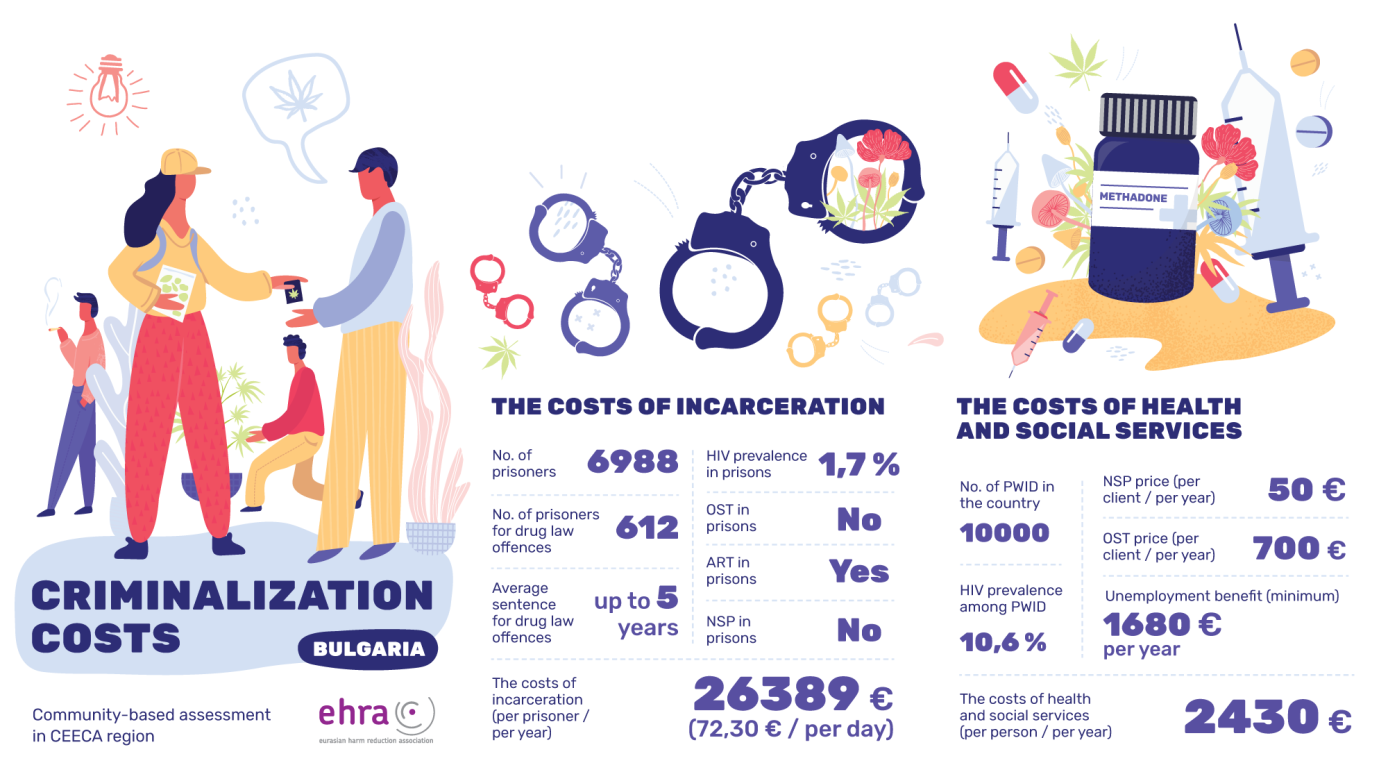 Russia has a larger number of prisoners than any other country in the EECA region. According to the Council of Europe Annual Penal Statistics (SPACE I), there are 602,176 inmates in Russian prisons, of which 129,419 have been convicted of drug offences. The country spends €912 per inmate annually, which equates to €2.50 per inmate per day.

There are an estimated 1.8 million people who inject drugs (PWID) in Russia, and HIV prevalence among this group is 25.6 per cent. Significantly, OST in Russia is prohibited by law. 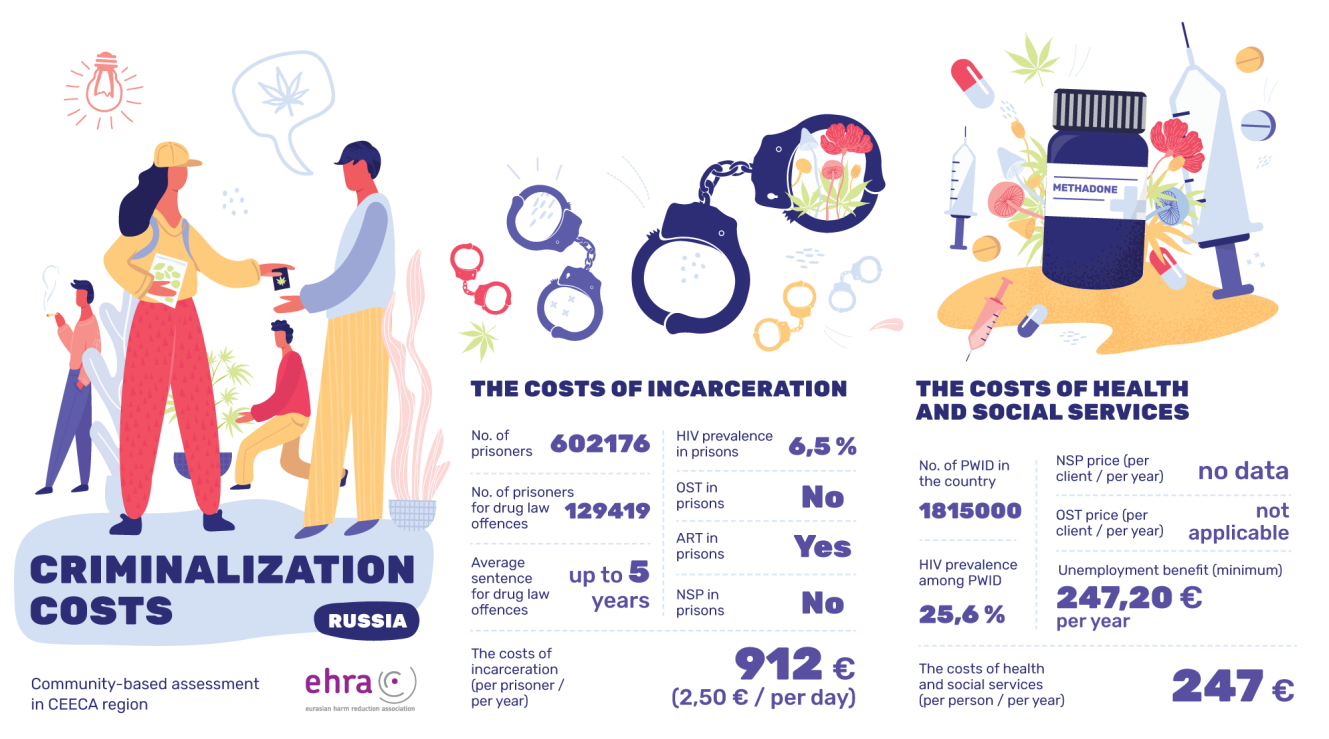 According to Kyrgyzstan’s National Statistics Committee, there were approximately 7,475 inmates in Kyrgyzstan prisons in 2017, 526 of whom were imprisoned for drug offences.

There are nine OST sites in prison settings in Kyrgyzstan, and there is access to antiretroviral therapy (ART). As of January 1, 2017, there were 14 NSP exchange points in prisons. The average amount spent per day for the detention of one inmate in Kyrgyzstan prisons is €2.99, or €1,091.35 per inmate annually. National OST and NSP programmes for people who use drugs in Kyrgyzstan cost the state around €465.85 per person per year. 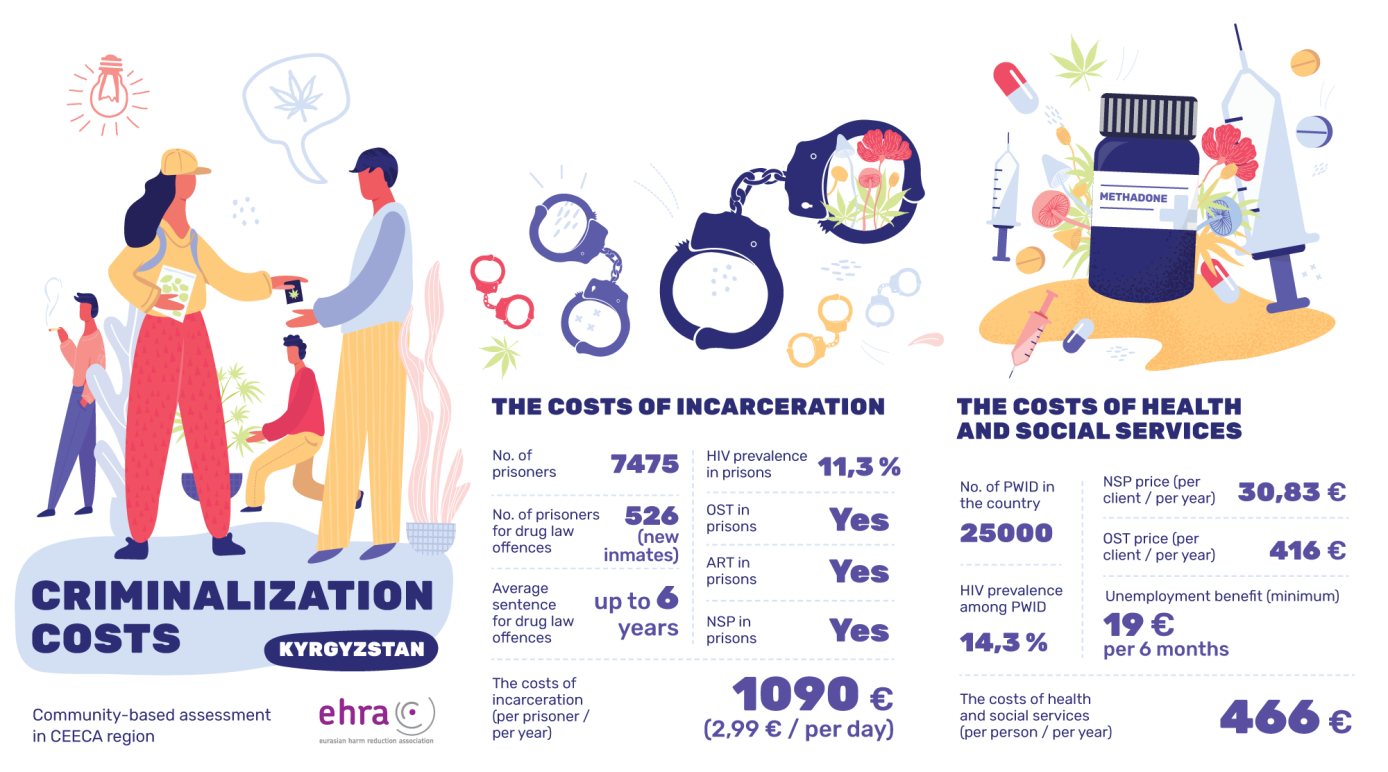 There are 55,000 inmates in Ukrainian prisons, of which about 4,400 have been convicted of drug offences. In Ukraine, harm reduction services such as NSP and OST are not available in prisons. At the same time, the daily cost for the detention of one inmate in Ukrainian prisons is rather low – €2.60 per person per day – similar to Russia.

The estimated number of people who inject drugs in Ukraine is 350,000. For PWID, essential harm reduction services - such as OST, NSP, and unemployment benefits - cost the state around €392 per person per year. Thus, the cost of incarceration is at least 5 times more than the cost of health and social services for people who use drugs. 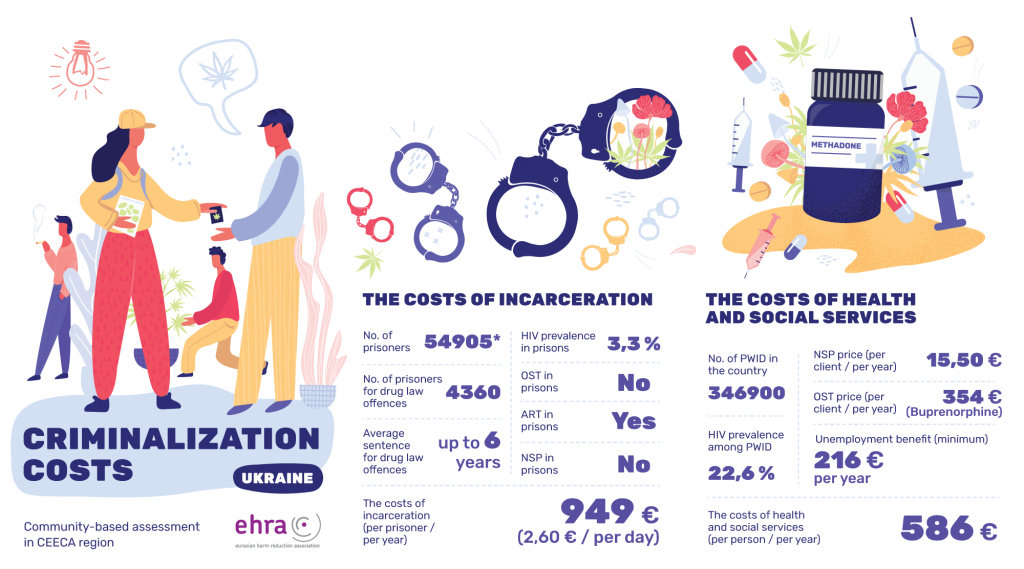 Eliza Kurcevič, the research coordinator on the study, told TalkingDrugs that budgetary funds are inappropriately allocated in the region under existing drug policies.

“The majority of the countries in the EECA region are in a similar situation: there is money for harm reduction services, but it will need to be reallocated within existing budgets. Significant savings in state budgets can be made if countries refer people who use drugs to harm reduction services such as substitution therapy, employment assistance and support of their social adaptation instead of imprisonment", Ms. Kurcevič said.

The cost of incarceration is calculated by multiplying 365 days (1 year) to the cost of maintenance of one prisoner per day. This amount does not include the cost of police work, investigation of the case, court proceedings and lost taxes that could have been paid had incarceration not occurred. If those expenditures were taken into account, the cost of incarceration would be several times higher. The personal cost of being incarcerated is extremely high even for a short term in prison, resulting in a loss of opportunities in education and employment, threatened parental rights, and often loss of household income for entire families, not to mention the physical and psychological toll incarceration has on people.

The losses caused by repressive drug policies are not yet taken into consideration in this study, not are the state’s costs for maintaining special police units for drug offences, the work of judges, lawyers’ salaries, and other related expenditures.

The study’s data has been collected by the efforts of people who use drugs and their allies, the EHRA partners, and harm reduction organisations in the EECA region.

For more detailed information on the countries of the EECA region, see the Eurasian Harm Reduction Association website’s here.