Language Matters: Is This a Drug Overdose or Drug Poisoning Crisis? Photos courtesy of Yes on Measure 110

The United States is in the grips of the worst fatal overdose crisis known to human history. 108,000 Americans died last year of drug-related deaths. Two-thirds of those deaths were attributed to fentanyl, which increasingly has found its way into the drug supply. What was once a contaminant in powdered heroin is now a drug of choice, having supplanted heroin in many markets. It is now a contaminant in cocaine and pressed into pills that purport to be oxycodone, Xanax, and mysteriously, Adderall. Youth overdose rates doubled one year to the next and continue to rise—mostly thanks to said pills.

The consensus had been that it’s a drug overdose crisis. But as deaths skyrocketed further, calls to reframe the crisis as a poisoning mounted. Grieving parents of unsuspecting youth rejected the language of overdose, as their child had only intended to take 30mg of oxycodone. They often prefer the phrase drug poisoning.

In Canada, the crisis is referred to as a drug poisoning crisis as a way of illuminating the cascading policy failures that led to a toxic drug supply. The vague poisoner, in this instance, is policy failures. In the US, the public is resistant to any such systemic analysis.

Since 1986, the United States has had a law called “drug delivery resulting in death”. It determines that the person who provides the drugs off which another person overdoses is responsible for the death, and it carries a mandatory minimum sentence of 20 years. The term drug poisoning, in the US, conjures the image of a nefarious “drug dealer,” with all the stigma that phrase has been imbued with over the years. It conveys an intentionality and malice, insinuating there is one single individual to blame. These villainous connotations obfuscate the reality; most people charged with drug delivery resulting in death (also known as drug-induced homicide) were in fact the friends or relatives of the deceased. 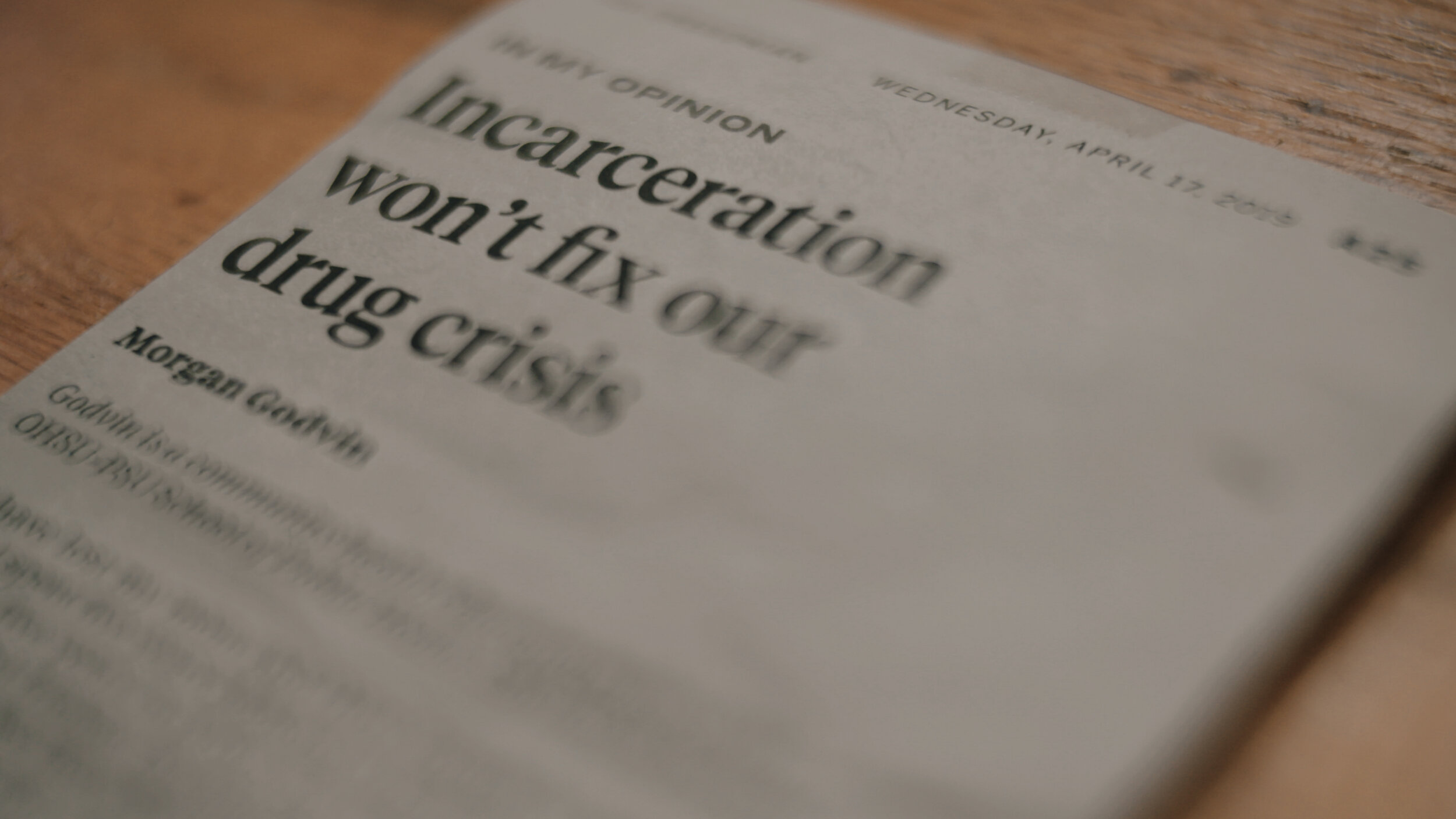 What is an overdose? Plainly, it is taking an excessive dose of a drug. It is what my mom did the night she swallowed extra doses of morphine, beyond her doctor’s prescription. She had a dose (60mg) and then she went over that. She overdosed and died.

It is not, exactly, what any of my friends who died from a heroin overdose did. Under the system of prohibition, we are incapable of truly knowing our dose. What on the scale shows two-tenths of a gram could be a wide range of milligrams of heroin, owing to the volatile purity of illicitly manufactured drugs. It’s not a quirk, it’s a feature of the system. Each of my friends that died were simply dosing. They weren’t pushing their limits recklessly (like my mom did, who may have committed suicide). They were using their standard dose, but the variability in drug purity across purchases meant it can radically change from one day to the next.

The phrase overdose, even, is a misnomer, for it implies intentionality; a wanton disregard for one’s own life. We were simply trying to get high, to numb our pain, to survive. While we tacitly accepted risks, death was not among them. Had we been provided an alternative to the unknown purity and unknown adulterant (and yet with hugely inflated prices) street drugs we were purchasing, we would have taken it gladly.

As the overdose crisis worsens, lawmakers turn to the only tool in their toolbox: incarceration. Colorado recently re-felonized fentanyl, despite all data showing that won’t work. Drug delivery resulting in death laws proliferate across the country, often spurred by grieving parents who want justice for their child’s death.

As much as my friends only intended to use two-tenths of a gram of heroin, the adolescents only consented to take 30mg of oxycodone. They both chose a dose with no intention of exceeding it—but both did not know the true dosage of what they took. Saying that the former overdosed while the latter was poisoned is to arbitrarily divide both groups of drug users into “guilty” and “innocent.”

My friends who died of heroin overdoses sought death no more than the teenagers who died from fake fentanyl-containing pills. Both groups chose to use drugs.

To be frank, there is an element of poisoning in the current crisis. Selling pills that look like Xanax or Adderall but are actually fentanyl to high schoolers is morally wrong and incredibly reckless. But here’s the thing: framing it as a poisoning cannot possibly bring any benefit.

The full might of the War on Drugs has been unleashed for decades, and to what end? US taxpayers have spent over one trillion dollars—ostensibly to reduce drug use—only to end up with a drug overdose rate twenty times that of the global average, with no impact on its availability. The notion that framing it as a “poisoning crisis” will somehow release even more government resources which somehow, unlike that trillion dollars that came before, will make a difference, is misguided. The government will continue to do what it has always done, with the same results.

When domestic meth labs were targeted as the problem, they were eliminated. Industrial scale Mexican meth labs were consequently formed, causing meth’s price to plummet. When OxyContin was targeted as the problem, heroin came in its wake. When Mexican poppy fields were targeted as heroin became the latest villain, illicitly manufactured fentanyl roared onto the scene, slaughtering a generation of drug users. Every law enforcement intervention has been as effective as cutting a head of a Hydra—it grows back, deadlier than before.

Reframing the crisis as drug poisoning in hyper-individualistic America will only lead to more punitive responses. Punishment crowds out prevention and treatment, as we can see by looking at a nation that simultaneously holds the trophies for most citizens incarcerated and most likely to die of drug overdose.

Upper, middle-class white people will be framed as poisoned, innocent, victims. The poor, the Black, and the brown will be framed as the guilty—those who overdosed of their own volition, those who used those drugs and got what they deserved.

Nevermind that, while alive, the use of any banned drug remains a criminal offence for all. Nevermind that the same conduct that could have landed them in jail (implying they knowingly and willingly chose to break the law) only becomes someone else’s fault if they die.

My friend Justin started getting arrested for drugs shortly after he turned 18. A carousel of mugshots stand in for where high school and college graduation photos should be. We suffered with addiction together, first OxyContin and then heroin. Eventually, he was sentenced to prison. While in prison, his fiance overdosed and died in a parking lot. Heartbroken and on parole, he tried to not return to use. But he had intermittent lapses and got strung out, like the night before my mom died where I had to rescue him after the buses stopped running and he was shivering, dopesick in the December chill.

In March, he asked me for a gram of heroin. He apologised for not making it to my mom’s funeral and gave me one of his famous bear hugs. I sold him the gram for $80 and resumed sitting on my couch, grief-stricken and addicted. A SWAT-like tactical team breached my door the next night, screaming and pointing rifles at me.

I was a drug poisoner. Justin was dead and for the first time in his life, the government determined he was worthy of their attention. I was to be prosecuted for his death, against his family’s wishes. The pesky opioid epidemic was increasingly appearing to be a series of cascading policy failures, of a deteriorating public health crisis. Best to reframe it as the fault of a series of criminal individuals.

But you cannot arrest your way out of a public health crisis. While the government spent $1.2 million incarcerating my friends and I, more of them died, one after another. The fact that drug delivery resulting in death laws make people more afraid to dial 911 during a medical emergency matters little. Americans conflate vengeance for justice and acquiesce to the illusion of action, completely ignoring the worsening outcomes of said action. Handcuffs or nothing at all, we seem to believe.

My friends who overdosed from heroin are no less innocent than those who overdosed off of fentanyl-tainted cocaine or oxycodone. Perpetuating some hierarchy of worthiness only perpetuates harm. If Americans heard the word “poisoning” and thought “policy failure,” I’d be supportive. But they do not. They hear “poisoning” and think “poisoner.” They then use the federal or one of 28 state laws to convict another person for murder, like they did to me. As criminal law always does, this framing will disproportionately benefit the white and wealthy (including grieving parents, who will see their will carried out in court) while disproportionately harming the poor, Black and brown (including parents, who will see their children carried out of court, cuffed).

If the landscape of drugs were not so dangerous, there would not be deaths. We do not need to project the harms of the past onto the future. And we do not need to wait for deaths to occur, only to then find someone to blame. We can de-poison the drug supply, easily. But while we seek villians for our story and someone to blame for our grief, nothing will ever change.

*Morgan Godvin has a day job but is an occasional freelance writer, in addition to serving on Oregon’s drug decriminalisation council. She is the founder of the nonprofit Beats Overdose, a harm reduction service provider for the music and entertainment industry.