“In nearly two decades of 12-step meetings, I’ve seen more people leave than stay, and many of them die”: Peter Krykant’s 12-step experience Peter at a baseball game when he went to speak at the Cocaine Anonymous World Convention in Chicago.

Talking and writing about my 12 step experiences publicly is hard, you must be prepared to accept that you will receive harsh and personal criticism from people who do not even know you.

To drink or use drugs was to die, I was told; you are powerless. Being selfish and self-centred is the root of your troubles. Hopeless, sick and a diseased addict, for nearly a decade I struggled with this message & continued to relapse after short periods of abstinence. Obviously I didn’t die as I am writing this now, but each time after using drugs I was told I was not broken enough or beat into a state of sufficient reasonableness (despite years of abuse, street homelessness, prison & trauma). And until such time came around, I would not be able to find the will to work the programme better, and thus find the higher power (God?) that I needed to stop using and not die.

My first “relapse” was on the train to Brighton on my way to secondary rehab after a stint in the 12 step Princess Diana Rehab located just outside Norwich where I arrived at the age of 23 just at the start of the millennium, straight from rough sleeping in Birmingham and publicly injecting heroin and crack. The requirement to keep your place at the rehab was work the steps, go to meetings, counselling and groups based around the 12-step concept of powerlessness; I was not aware of this when I had arrived. After this short relapse, and after being allowed back to the treatment centre, I was told that despite having written steps 1 to 5, that I had not accepted my powerlessness. “You have not ‘surrendered’” I was told, and that I must surrender to truly not use alcohol or drugs, emphasising that I would die if I didn’t surrender, work the program, and stay “clean”.

I used drugs countless times over the next 9 years. Each time I would find my way back to meetings, sometimes via a detox/rehab, sometimes just by not having anywhere else to go. Nothing else was ever offered. And the message from the 12 steps was always very clear: I was not working my programme well enough and I was going to end up in “jail, institution or death”. 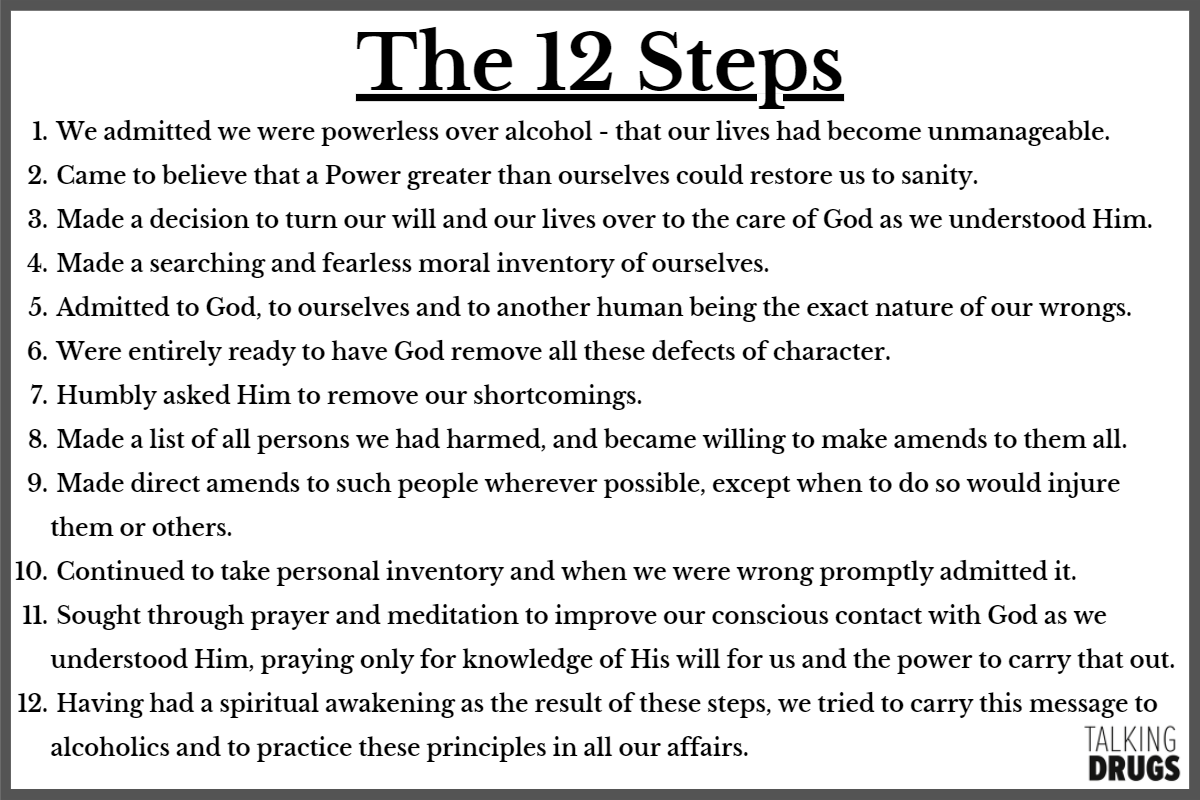 12-step fellowships can be fun when you have few or no connections in life. There was always plenty of sex between members, sober dances, etc. There are no disclosure checks or protections (literally); newer members were often having sex, often the prey of longer-term members, commonly referred to as the 13th step. The fellowships offer connections, a place to go, and meetings to attend. This works for some; the value of shared experiences keeps everyone together.

Like most people who have spent long periods of life isolated, you want to fit in. So I did. As a confident speaker, I was often asked to talk at meetings; I became a well-known member, but after nearly a decade of relapse after relapse, I was seen as one who was “constitutionally incapable of being honest”, so could not get “well”.

10 years on from first attending 12-step meetings and after another period of drug use, I found myself in meetings yet again in June 2009, tail between my legs. This time I would work my programme harder, I would find God and stop being “selfish & self-centred" as I was described, and stay out of relationships, as I was told this was my problem. I jumped back into it again, as I had many times before: I attended meetings, got a sponsor, did service (making tea and coffee at meetings), worked all 12 steps of the programme, and crucially joined the gym. When I look back, this is where the real change happened: I met a woman outside the fellowship, I started to build what I know now as “life”. I had love, a good job and purpose.

I started to flourish in the fellowship. I spoke about my wonderful life, being married, having kids… I was a fellowship success story, and I was asked to talk all the time at meetings. I spoke at the Cocaine Anonymous World Convention in Chicago as well as national conventions in Holland, Ireland, and Scotland. I worked as a call centre manager, and was truly enjoying life.

Every other week you would hear about a death, more and more frequently as social media became a part of everyday life and the fellowship connected me with areas from around the world. But these were always written off with the same comments I had heard before: they didn’t surrender, work the programme well or couldn’t accept their powerlessness. Never was it discussed that they could have potentially done better elsewhere, or that they could be someone like me that came back time and time again over many years. I never heard any suggestion to try something else like counselling, trauma therapy, or CBT; maybe some of that stuff would help, but it would not “solve the drug problem”, I was told. And until I did solve that, I was told to leave that other stuff alone, as this was referred to as “outside help”.

I went on to get married and have kids, built a life with my family, travelled with them, got pets, and built a love that I had never experienced before, forgetting all about the years of trauma, and years of near fatal overdose after periods of being “clean”. However, in 2018, after being a stay-at-home dad with my two kids, I changed career to start working with people who use drugs. That changed everything.

I quickly saw abstinence was not the miracle that stopped or reduced drug deaths I thought it was,  and which is pushed by so many “professionals” with “lived experience”. I started to see the reality of hundreds of deaths of people that relapsed in the fellowship who hadn’t properly “worked the programme”. In recent years, the 12-steps and its meetings had become a smaller part of my life; my attendance and involvement had dropped after moving back to Scotland in 2013. For the first couple of years I had been there, the main thing I did was the conventions, big events with speakers and dancing, which as I said had been fun. I believe that’s what keeps it functioning, the aspect of connections rather than what the book of Alcoholics Anonymous’ 12-step book states its main objective is “to enable you to find a Power greater than yourself which will solve your problem”.

Instead, I read as much as I could about harm reduction & prohibition; I opened an unsanctioned overdose prevention site in Glasgow and advocated for harm reduction and safe supply as a priority, all the while being trolled by my old 12-step connections on Twitter. Running an injection facility without official support, no funding, no counselling, no supervision, constantly watching for police while handling all the media attention took its toll on me. Seeing trauma and the pain others were going through, the experience of unstable accommodation and street drug use, often as victims of the war on drugs, a lot having experienced difficult childhoods raised in areas of poverty and in and out of prison brought back exactly what it was like for me.

After 11 years I used drugs again, heroin and benzos which was weird, but it was something I needed then. I tried meetings again, but I knew now it was not for me. I just couldn’t accept the concepts anymore: the “illness”, the “diseased addict”, the “always recovering”, the lack of power and having to  find God in order to not use. A lot was said about this event in my life. I heard – again - how I had stopped working my programme, I had to - again - “surrender” and – again - “abandon myself to God as I understood God”. But now something had changed in me. I had gradually begun to realise that for me, being abstinent from drugs was never about God or 12-steps. It was about love and connections, and I have found more of this in the world of harm reduction and drug policy to build on top of what I have in my life with my wonderful family.

In nearly two decades of going consistently to 12-step meetings, I’ve seen that more people leave than stay, and many of them die. Some are damaged greatly from the predatory behaviour inside it, and some commit suicide rather than finding God and staying “clean”. The base principles of spirituality, honesty, willingness, open-mindedness are hard to argue with, and for those who lives are improved due to it, I am glad that they have had this experience. I have many people I still regard as friends in AA, CA and NA fellowships, and writing this is not to say there is no place for them, or that it does not work. This is simply my own personal experience and observations.

My concern is that, in the past two decades since I first went to a 12-step rehab programme, this is still the main option being offered by many professionals, many who are themselves in 12-steps and working with people who use drugs. Remember that this is a 1930s program born from a religious “The Oxford Group” movement, brought about after a time of alcohol prohibition. At its heart is the belief that someone’s inability to make any sensible decisions is limited until they turn their will and lives over to “God as we understood Him”.

Surely in 2022 we can see that harm reduction, safe supply, ending poverty, providing stable housing, clinical counselling and social psychological therapy must come first to help people with problems with drugs. Shouldn’t we continue to fight to end prohibition and the war on drugs, which has caused most of the problems that have arisen, that sometimes can’t be faced or helped on our own?

*Peter Krykant is Project Lead with the charity Cranstoun leading on new and innovative ways to create system change through implementation of evidence based harm reduction practices. He is also a Trustee at Release.