The Philippines correctional system chief has said anyone convicted of a drug offence – including personal possession - should be executed, as a bill reintroducing the death penalty gains overwhelming support in the House of Representatives.

Bureau of Corrections Director General Ronald Dela Rosa, who took on the senior role in late April 2018, said that people convicted of any drug offence should go "straight to lethal injection". Dela Rosa specifically noted that this should include people found in possession of small quantities of illegal drugs for personal use, during an interview with Rappler.

Dela Rosa has no legislative power, but said “if it were up to me, [any offence should receive the death penalty] as long as it involves drugs”, in the interview broadcast on May 11.

His statement came days after the country’s House of Representatives voted to approve the final reading of a bill that would introduce the death penalty for several drug-related offences, including one drug possession offence.

House Bill 4727 allows judges to impose the death penalty on people convicted of importing, manufacturing or selling drugs; maintaining a drug "den, dive or resort"; or possessing a quantity of drugs exceeding a certain threshold – including 10 grams of heroin, cocaine, or methamphetamine, or 500 grams of cannabis. The bill allows people to be executed by hanging, firing squad, or lethal injection. 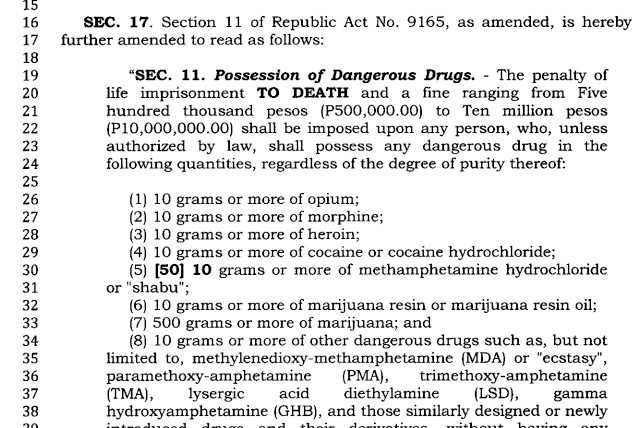 An excerpt from House Bill 4727

President Rodrigo Duterte has publicly endorsed the bill. In July 2017, he said the legislative change would “[allow] us to fulfil our mandate to protect our people. […] Capital punishment is not only about deterrence, it's also about retribution," TalkingDrugs reported.

Dela Rosa’s declaration in support of the death penalty for all drug offences may be unsurprising for many in the Philippines. He is the former police chief of Davao City – where Duterte was once mayor – and has a close relationship with the president.

In an unctuous Facebook post prior to Duterte’s election in 2016, Dela Rosa praised the then-candidate as "the greatest influence in [his] career" and "the greatest leader on earth". His loyalty to Duterte seemed to pay off, as Dela Rosa was appointed chief of the Philippines National Police (PNP) one day after the presidential inauguration in June of that year. The PNP is the key law enforcement body behind the killing of thousands of people for alleged drug offences – without charge or conviction – that has taken place across the country since Duterte and Dela Rosa took control of the government and police force respectively.

Now that is has cleared its final legislative reading, House Bill 4727 will proceed to the Senate for consideration. While Dela Rosa’s hopes for capital punishment for all drug offences may not come to fruition any time soon, there is a good chance that the penalty will soon be imposed for people convicted of certain narcotic crimes. Regardless, the extrajudicial killing of people for alleged drug crimes seems set to continue.