The prohibition of coca leaves is an out-dated, colonial heirloom A Bolivian coca farmer amidst an organic coca plantation in los Yungas, Bolivia

Contrary to popular belief, Coca Cola did not rise to success by selling drinks laced with cocaine. That signature taste we all know so well is in fact thanks to an immensely nutritious plant valued greatly by the communities that have historically cultivated it: coca.

Coca is so much more than merely the source of cocaine. Coca can be processed into a wide range of products: tea, flour, candy and even toothpaste - as well as everybody’s favourite fizzy drink. In pre-colonial times it was celebrated throughout South America; coca is a healthy plant with nutritional and medicinal qualities. But in the eyes of the colonizer, the consumption of coca was a barbaric, inferior custom. Today, the 1961 ban on the production and supply of coca still exists, with devastating effects for cultivating-communities.

Based on unscientific and imperial rhetoric, coca became a universally prohibited crop, legislated in the Single Convention on Narcotic Drugs in 1961 and sustained even today. With just one exception: the United States is the world’s only licit importer of coca. Coca-Cola, arguably America’s most famous company, uses the plant in question wholly legally to achieve its renowned and profitable signature taste. Abundant profits from the crop are legally sanctioned for pharmaceutical industries, Coca Cola and its owner, Stepan Company.

As a result of coca’s association with cocaine, a substance already plagued with racist fiction, communities are still being deprived of the opportunity to cultivate their own indigenous plant, a unique crop, and as such, a unique international market. The legislated stigma and discrimination associated with controlled substances in general - not to mention the people who consume and produce them - comprise further barriers.

In 1949 Howard B. Fonda, the US chairman of a United Nations commission that “studied the effects of coca addiction”, concluded that consumption of the coca leaf would be an obstacle to the assimilation of indigenous people into “modern” (read: colonized) society. Operating in Peru and Bolivia, the UN committee did not engage with existing scientific, botanical and anthropological knowledge, instead allowing Fonda, vice-president of the pharmaceutical manufacturer Burroughs Wellcome & Co. to lead on the project - with no knowledge of pharmacokinetics, plant physiology or the cultural significance of coca for indigenous communities. 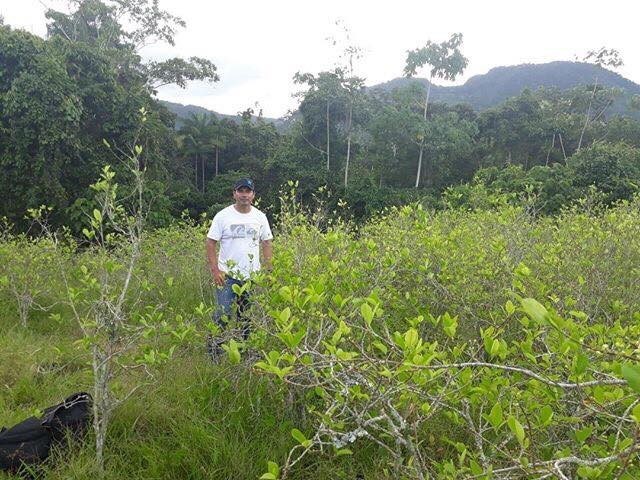 The report falsely concluded that coca contained cocaine, and therefore that the effects of chewing coca would be the same as that of consuming cocaine - here lies the source of the Cocaine-Cola Myth.

When the US kicked off the War on Drugs in the 1970s, the militarization of coca plantations began, with policies focused on the eradication of coca cultivation and repression of coca farmers, who became enemies of the War on Drugs. The Drug Enforcement Administration (DEA), began to militarize the regions where coca grows: Peru, Colombia and (until the arrival of the indigenous president Evo Morales) in Bolivia too.

Among the effects of chewing coca, it was mentioned that consumption damages the consumer’s intellect and moral thinking, harming social and economic relations - hence the notion that chewing coca would limit indigenous communities’ capacity to “live up to” the social standards dominated and ruled by descendants of Spanish settlers.

It is striking that the US, the architect of much of the deep-seated stigma and misinformation about coca leaves, imposing particularly repressive policies on coca-cultivating countries, is also home to the world’s only company that legally benefits from coca leaves. With permission from the DEA, the United Nations Office on Drugs and Crime makes an exception for the mother company of Coca-Cola: Stepan Company.

Enaco, the Peruvian state-owned company based in Lima, exports between 130,000 and 150,000 kilos of coca leaves annually directly to Stepan Company. “These leaves are grown by 10,000 coca farmers, employed by Enaco,” Richard Caballero explains, commercial manager of Enaco. 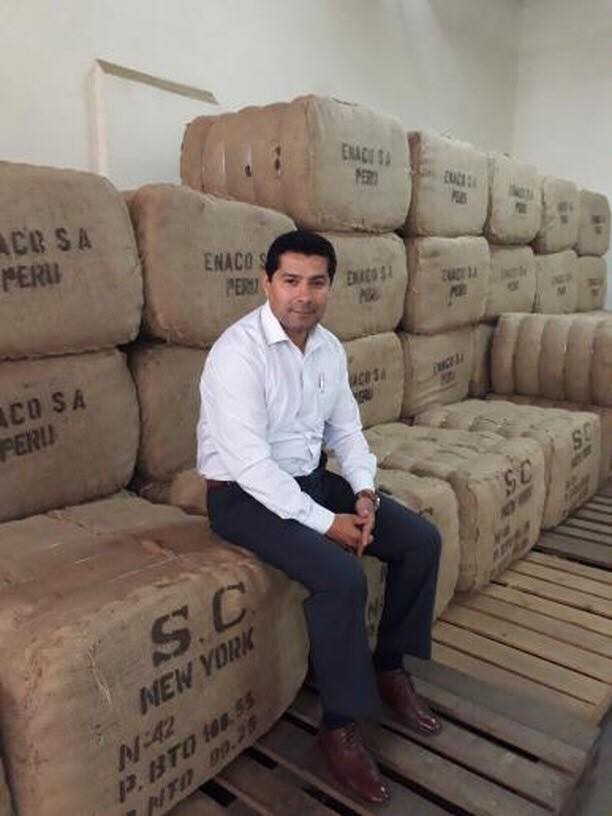 Richard Caballero amidst a cargo of coca leaves, on their way to the United States

“The coca leaves are shipped from Lima to Stepan Company in the US, who then extracts the alkaloid cocaine from coca and sells it to pharmaceutical companies based in the UK, Scotland, Germany, Japan and the US to be processed into an anesthetic and used for, eye surgeries and other medical purposes, with the remaining juice sold by Stepan Company as an aromatic to Coca-Cola.”

The alkaloids are abstracted out of the coca leaves for Coca-Cola -  the United Nations perceives these particular coca leaves as a flavour maker. The leaves that are distributed to pharmaceutical industries have medical and scientific purposes, which legitimizes their exception of the 1961 treaty. These pharmaceutical industries are located in Western countries and have no base in Peru. Peru is merely providing the cultivation of coca leaves. 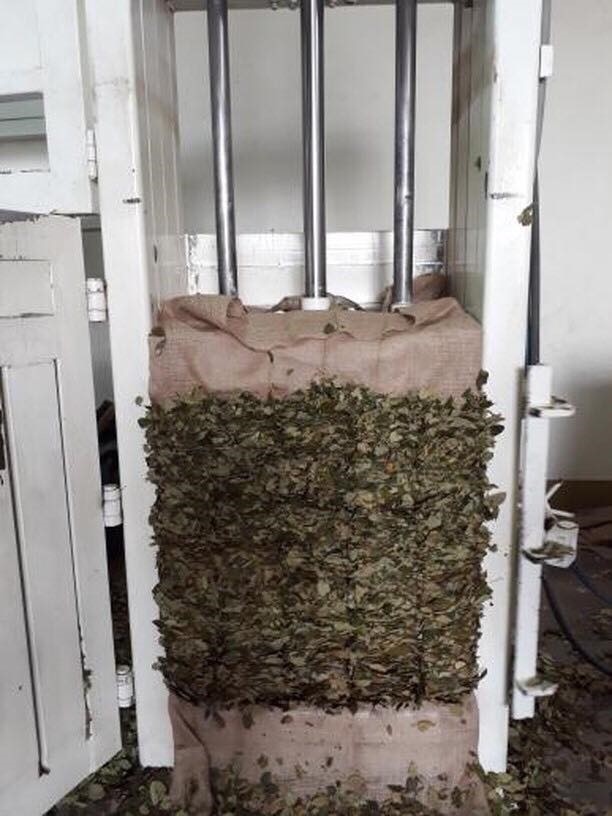 Coca leaves being pressed in a parcel, getting ready for transport

Imperialism is about the interaction between countries, where the distribution of living conditions, such as income, property, quality of life or degree of autonomy, is unequal. This uneven distribution is the result of the dominant position of one country, country A, which acts in favor of itself. The other country, country B, has the resources that country A needs. Country A has the market, the supply and demand, the company, the means of communication and marketing, the knowledge and development perspectives to create employment in their own country. Country B may be rich in resources, but it lacks employment and a thriving economy, making it prone to exploitation. It is merely suited for the extraction of raw materials. Extraction alone does not generate further employment. Because income is derived only by harvest, the economy does not grow. As a consequence, there is a growing dissatisfaction from country B towards the failing state. In country A there is less dissatisfaction with the state because there is a thriving economy in that country that provides welfare.

So, coca leaves can grow in Peru, but the state has no rights to export them for its own gain. This exclusive privilege is in the hands of an U.S. company and Western pharmaceutical industries. Imposing the ban on coca in other countries, whilst simultaneously being the only one to profit from it, the U.S. continues to make gains from imperialist hegemony, depriving coca-cultivating communities from engaging in their own culture, never mind profiting from a unique international market. The prohibition of coca leaves is an out-dated, colonial heirloom that desperately needs to be reformed.

* Janneke Nijmeijer is the founder of Fair Trade Cocaine, a foundation that researches constructive, humane and sustainable alternatives to the War on Drugs, with a focus on the cocaine trade. One of its aims is to reduce the corruption, violence, militarisation and ecological destruction that accompanies prohibitionist drug policy.