About 317,000 Ukrainians inject drugs like heroin regularly. As of January, 14,868 of them were receiving substitute opiates such as methadone and buprenorphine.

Ukraine has been funding these treatment services since 2017. In that year, it also rapidly expanded its services for people in need of sterile syringes, condoms and peer support or counselling – the World Health Organization-recommended minimum for harm reduction among drug users and those at risk of HIV.

The Russian invasion has severely disrupted access to these specialist drug-treatment services. Before the war, some people would collect their methadone daily, but the Ministry of Health has advised that a 15-30 days’ supply should be given. This helps to reduce the number of trips to services, which in some parts of the country are risky. Yet even at this early stage in the war, ensuring people can secure medication is proving difficult.

Of the 1,328 people registered with drug services in Kyiv, so far, most have been able to get their opiate substitution medication. But services in other parts of the country aren’t faring so well. They are either running out of supplies or contact has been lost with local drug treatment teams.

Without this daily supply, people will develop severe withdrawal symptoms. Although these are not life-threatening, they are extremely uncomfortable at a time when people are already experiencing significant stress. We know that food, water and safe accommodation are disappearing for many in Ukraine.

An increasing number of Ukrainians are leaving the country, seeking refuge in neighbouring countries. The Ministry of Health is trying to reach an agreement with its neighbours to ensure care is continued for those who need treatment for tuberculosis or HIV. 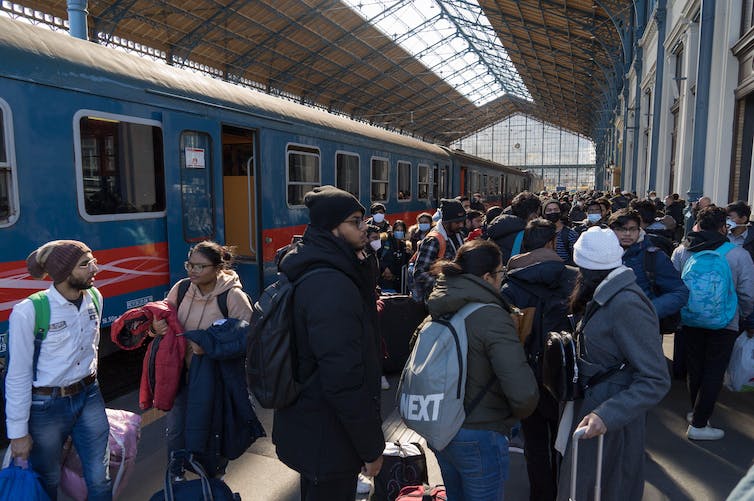 The International Narcotics Control Board has encouraged these countries to ensure there is also access to substitute opiates for refugees. Negotiations have been taking place between Ukrainian officials and health authorities in Moldova, Romania and Poland to ensure injecting drug users can continue to get treatment, though it is not clear how much effort or success there has been.

There are significant differences in the way neighbouring countries provide treatment to those who are dependent on drugs like opiates. Some countries are not as progressive as Ukraine in their attitudes to people who use drugs. Recent ceasefires have opened up humanitarian corridors to Belarus and Russia, both of which are opposed to treatment – hardly enticing options for people in need.

President Putin has made clear his disdain of people who use drugs, most recently accusing Ukrainian leaders of being a “gang of drug addicts and neo-Nazis”.

In 2011, Russia declared “total war” on the country’s drug problem. It is difficult to source reliable estimates of how many Russians now have problems with drugs, though recent analysis of debates held in the Russian parliament between 2014 and 2018 suggest about 8 million Russians use drugs regularly. This compares with 6 million in 2011. It is not clear what proportion depends on or needs treatment.

After decades of official denial that drug use existed in the Soviet Union, the post-Soviet authorities were forced to acknowledge the HIV/Aids epidemic in the 1990s. This was linked to injecting drug use, which today accounts for 40% of new HIV infections in Russia.

An increasing number of Russians have developed problems with drugs such as heroin; a recent article suggested that 3 million Russians are injecting drugs. Many of these people don’t have access to harm-reduction services such as needle and syringe exchange schemes. Without these, the risk of contracting HIV and other blood-borne viruses is increased.

Russia is also the only country among the 47 member states of the Council of Europe that prohibits opioid substitution therapy. The prospect of long-term occupation by Russia therefore has deeply negative implications for harm reduction services in Ukraine.

Russia’s domestic drug policy has been counterproductive in fuelling disease spread, stigma and human rights abuses. There is no doubt that people who use drugs are vulnerable during conflicts, and those risks are amplified considerably when an invasion is orchestrated by a president who has complete contempt for them.

Ukrainians dependent on drugs have a right to healthcare. But that support looks to be evaporating quickly, albeit not for the lack of courage by those trying to provide treatment during this conflict.

This story was originally published on The Conversation. You can read it here.