Will the UN Revamp its Disastrous “Drug Free World” Campaign in Brazil? Amidst a global pandemic and a worldwide progressive wave of drug decriminalisation for medical purposes and adult personal use, the UN is partnering with the Brazilian government, seemingly in an attempt to revamp its “Drug-Free World” campaign.

On the 26th of December 2020, an international seminar marked the launch of a pilot project, the  Centre of Excellence for Illicit Drug Supply Reduction, a partnership between the United Nations Office on Drugs and Crime (UNODC) and the Brazilian National Office on Drug Policies (SENAD, in the Portuguese acronym), with support from the United Nations Development Programme (UNDP). The pilot stage is planned to last for 18 months, and the Centre is expected to be incorporated by the Ministry of Justice and Public Security. It goes without saying, of course, that the language adopted by the Centre describes illegal drugs themselves—and not prohibitionism, punitivism, and incarceration—as a social problem to be overcome by reducing supply.

There are many issues with this infelicitous partnership. On the ideological level, it lays bare the will of the Brazilian far-right to confirm its bias and prove that there is an epidemic of drug misuse in Brazil that would legitimise the use of force for combating the supply and use of illicit substances. The recent censorship of Fiocruz’s large-scale study on the use of illicit substances in Brazil tells a lot about this stance.

Another point to consider is that a partnership with a UN agency lends international support to Bolsonaro’s draconian drug policies. The UNODC has been supporting decriminalisation and decarceration in the last decade—a stance that has caused polemic in the recent past—, something very distant from Bolsonaro’s drug policies, but its programmes aimed at the Global South are still strongly oriented towards building capacity for law enforcement instead of focusing on other areas of social care that have been delegated to the field of policing over the years. It is not a coincidence that the seminar that inaugurated the Centre of Excellence for Illicit Drug Supply Reduction gathered many professionals linked to the police forces and the penitentiary system, with few researchers present.

In a 2019 report on drug-related matters, the UN states that “policing that targets the most violent drug traffickers can reduce violence by creating a powerful deterrent to violent behaviour.” This is what the UN claims to have learned over the last ten years. What we have learned in these last 10 years of policing so-called violent drug traffickers in Brazil, though, tells a different story.

The war on drugs à brasileira is a macabre enactment of tropical, far-right necropolitics. Its choreography brings Black and Brown bodies to the main stage where they duck, dodge, and die from bullets. It legitimises actions such as army soldiers firing over eighty high calibre bullets at a car, killing a 46 year old musician who was driving his family to a baby shower in Rio de Janeiro, because they mistook him for a gang member. Being Black and driving a car in Rio de Janeiro is a risk. Black and Brown people are always suspect of being criminals, gang members, menaces to society. And if they are suspect of being criminals, their lives are expendable, and they become fair game for trigger happy policing. Over the last decade, Rio de Janeiro state police alone killed 9,000 citizens, and more than three out of four people murdered by police officers were Black. And as TalkingDrugs has previously reported, the COVID-19 pandemic has not stopped police officers from targeting Black people.

The justification for these “accidental” murders are always based on alleged mistakes. Soldiers and cops think that some Black male is a drug dealer or a gang member because he is walking on the streets of a poor community, or standing on the corner. They shoot at him. If he survives, they ask questions. And they may well be carrying illicit substances so they can forge evidence in their routine operations and justify arrests and the use of violence.

Suspended governor of Rio de Janeiro, Wilson Wizel, while campaigning for office, said that under his rule “[t]he police will do the right thing: take aim at [a thug’s] little head and … fire! Just to be on the safe side.” He was talking about shooting people who are spotted carrying rifles, but, as we know, police officers are prone to mistake many different objects with weapons. If you are Black and are seen on the streets carrying a skateboard, a drill, or even popcorn in a paper sack, officers or soldiers might mistake it for a gun, or illicit drugs, and feel authorised to shoot at you.

Witzel himself hopped on a helicopter along with police officers of the Civil Police special forces to hunt for alleged gang members in the city of Angra dos Reis. This is the type of disastrous, sadistic operation that brings death to poor communities. It normalises surreal, desperate measures like that of Yvonne de Mello, who runs an educational project in the Favela da Maré, in the city of Rio. After years of getting caught in the mid of crossfire, she got a sign installed on the roof to warn police snipers in helicopters that the building is a school. We must not lose sight of the fact that Favela da Maré is the former neighbourhood of Marielle Franco, the council woman assassinated by militiamen (who are, coincidentally, tied to the Bolsonaro family). 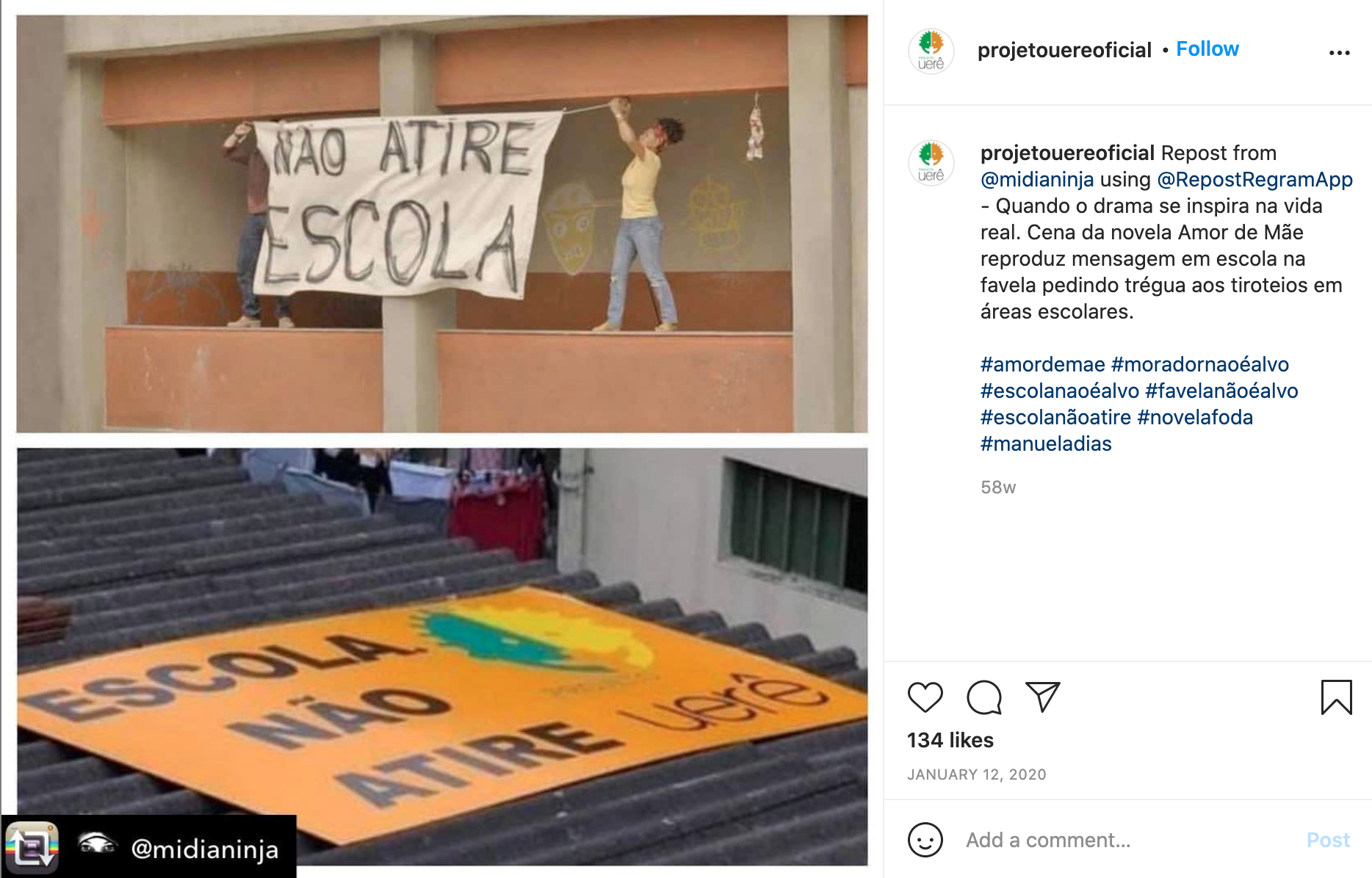 The sign on the roof of Projeto Uerê, in Favela da Maré, reads “School. Do not shoot”. If Witzel and the police officers had taken the time to read some of the letters written by children who live at Maré they would know that helicopters and snipers do not make them feel safe. Instead, they do not like the police helicopters because “they shoot and people die.” Source: Instagram.

Bolsonaro had warned that under his rule, people suspected of being involved with the drug trade “are going to die in the streets like cockroaches, and that’s how it should be.” We can accuse Bolsonaro of many things, but we cannot deny that he is keeping his promise regarding the war on drugs. The Brazilian president, a fan of Augusto Pinochet who publicly praises torturers, can definitely boast about being specialized in killing. His fetish for the politics of state-sponsored violence is well represented in a bill he has been trying to pass into law since his first days in the Alvorada Palace. If approved, the legislation will allow judges to suspend trials of police officers convicted of murder if they claim self-defence and the judge understands that they used force due to excusable fear, surprise, or intense emotion. In 2019, his first year in office, police brutality peaked. In 2020, police officers were responsible for 25% of the homicides in the state of Rio de Janeiro, killing 1,239 people. In the same year, police officers in the state of São Paulo killed 814 people. To be clear, Brazil is composed of 26 states in total.

Hope Is The Last One To Die

It is important to follow the outcomes of government partnerships. The UNODC has a responsibility that must not be taken lightly: the agency can choose to support the war on drugs in Brazil ideologically, financially, and institutionally. If that is the choice, there will be blood, there will be corpses.

The other, more hopeful option, is to become a critical ally, who dissuades their partner of making the wrong choices and supports them to find a better way of dealing with their issues—by making sure they realise that the issue is with themselves (in Brazil’s case, their drug policies and law enforcement), and not with an imagined epidemic of drug dependency in Brazil. That is the stance we should expect from the UNODC. High hopes, I know, but as the Brazilian expression goes, “hope is the last one to die.”