After Coca: How the Drug War Colonises the Colombian Forest One of the first and consistent targets of the global War on Drugs has been the coca plant. Even after the Colombian peace agreements, American-sponsored international efforts to control drug supply will always focus on suppressing coca crops in their producing nations, no matter the cost.

While coca is a stable and profitable crop in local campesino (peasant farmer) cultivation, nationally and internationally, it is a target for eradication. While the dogged pursuit to eradicate all cocaine directly contributes to the systematic destruction of tropical forests across the Andean and Amazon region, the subsequent occupation of land by commercial agriculture businesses irrevocably transforms areas of high biodiversity and conservation importance into privatised pastures.

The criminalisation of coca means that there is a constant destructive cycle of forestland being cut to grow coca, which is then eradicated by the government with the carcinogenic herbicide glyphosate. Campesino cultivators consequently displace their fields deeper into the forest, leaving bald patches of empty land behind, where the bush and its surrounding flora have all died off. These abandoned pieces of land are often colonised by private forces like cattle grazers, who transform it into grasslands for grazing. These agribusinesses are increasingly responsible for pushing the agricultural frontier further and further into the forest. 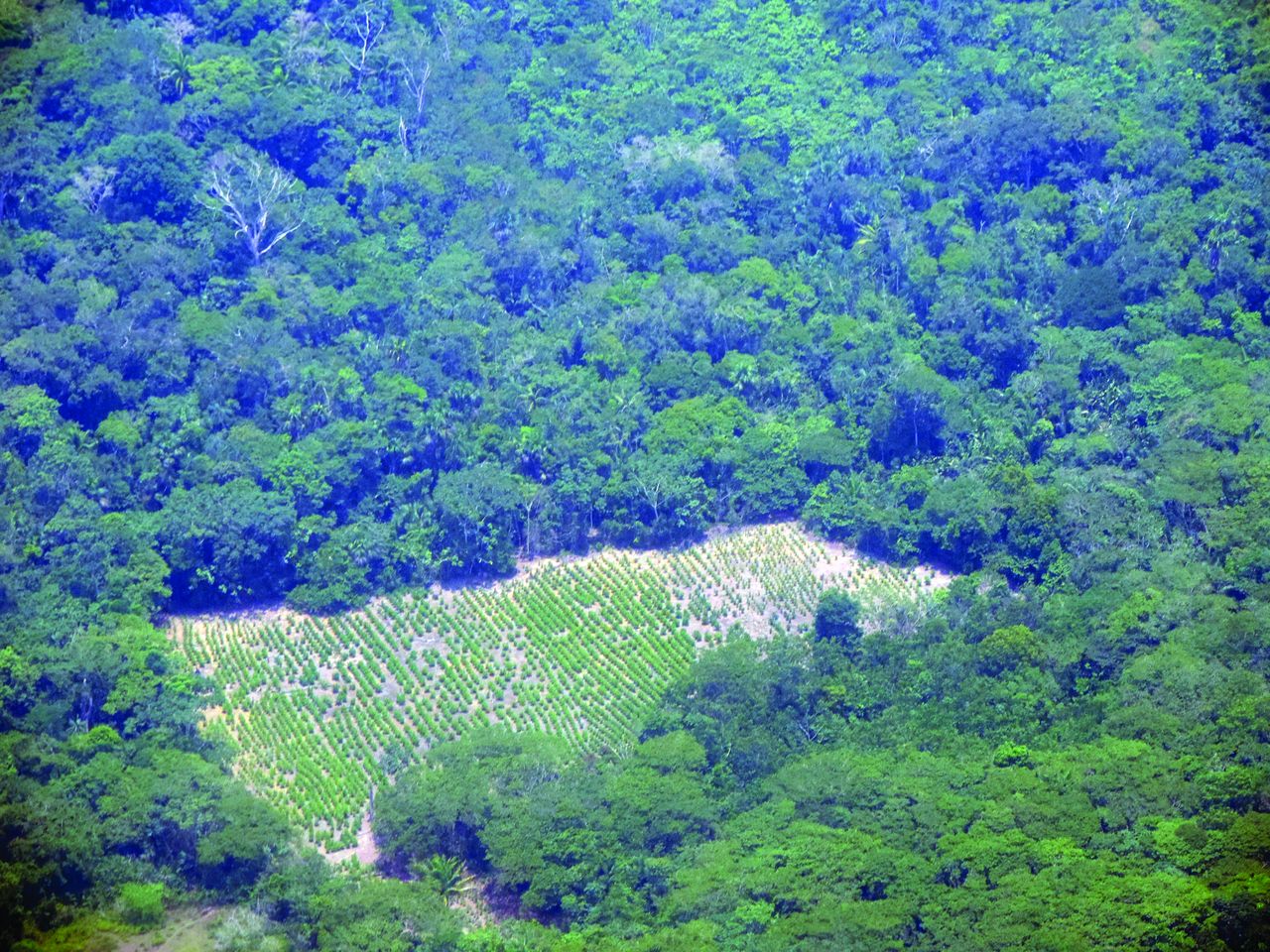 Former coca crop plantations can be seen from the sky in the forest, empty patches of land ripe for takeover.

The War on Forests

Not only is the War on Drugs a war against people, it is a war against forests, and against lands with no owners.The occupation of land is effectively legitimised by the government’s crackdown on coca cultivation, always framed as a great evil that requires eradication.

Government data illustrates the relationship between coca growth, how much deforestation it causes and to what extent it is eradicated. However, not much is said on the dynamics of land use after coca eradication.

The process of Colombian deforestation is not uniform, nor led by a single source: government evidence from 2005 to 2015 showed that 50% of deforested land was turned into grasslands for pasture. Additional analysis highlighted that the primary drivers for deforestation in the country were conversion to grasslands, extensive livestock grazing practices and the expansion of agricultural frontiers into forestland. Some sources measure the cattle industry as having caused nearly 90% of forest loss in the Amazon region of Colombia.

Cattle ranching as a method of land colonisation has been conducted in Colombia for almost 30 years: the 1994 alternative development Programa Plante offered extensive cattle grazing and land titling as an incentive to transition away from coca plantations. These programmes offer substantially less income for cultivators than coca, but is the best path to legally own the land worked on. However, with most campesinos not actually owning cattle, this land is either leased to or purchased by cattle owners, who use deals with local governments to ensure they control the land’s future.

In 2016, Colombian researchers modelled how development projects like legal agriculture and opening transport routes into the Amazon – not cultivating coca – were key deforestation drivers. Their results determined that “coca cultivation is neither an important cause of direct deforestation nor a powerful factor determining deforestation rates,” and that efforts to stop deforestation should focus on stabilising the agricultural frontier more than in coca eradication.

Coca plantations’ impact on deforestation has felt exaggerated, but it is undeniable that significant quantities of forestland have been lost. The challenge remains to identify what land previously used for coca cultivation is being transformed into private grazing lands.

Government statistics do a poor job at recording the transitioning purpose of land. In 2017, the Colombian Ministry for Environment and Sustainable Development stated that 24% of all deforested areas were caused by coca crop plantations, justifying at that time a heavier aerial eradication of the plant. However, historical data from the Institute of Hydrology, Meteorology and Environmental Studies (IDEAM) highlighted that through 2005 to 2015, the strongest driver of deforestation had been grassland conversion and intensive cattle grazing, accounting for 50% of all the deforested area; only 5% was caused by coca crops. 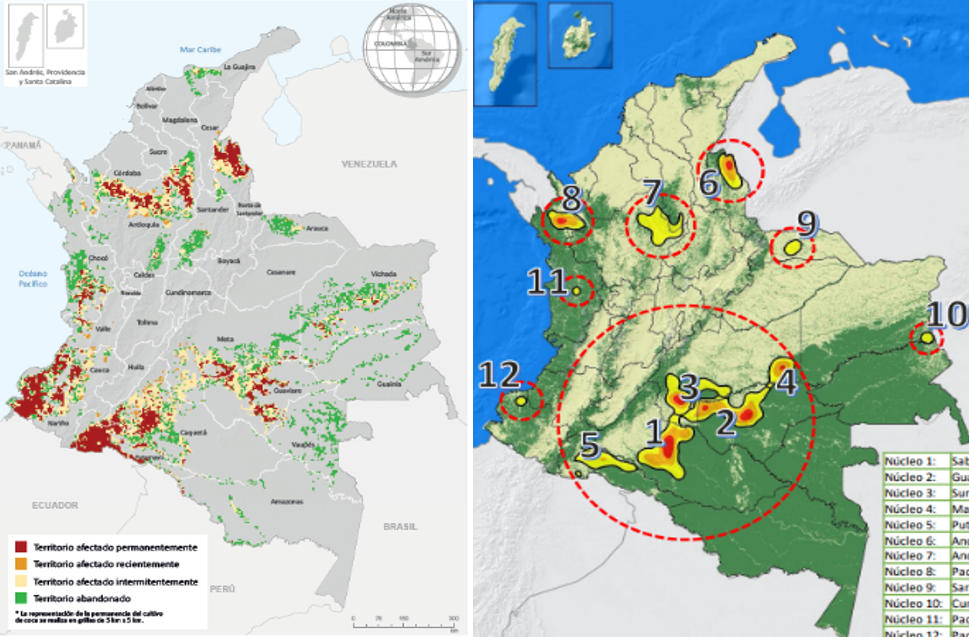 Map 1, on left: Coca crop presence is indicated in the map on the left: red is territory with historical coca plantations. Source: UNODC, 2019

Map 2, on right: Intensity of deforestation in Colombia in 2019: the heatmap indicates in red the areas with most intense deforestation. Source: IDEAM, 2019

The map on the left highlights permanent coca territories in red; these are territories where coca is transformed into cocaine paste, or locals consistently grow coca. In orange and yellow are territories that have been recently or intermittently impacted by coca crops, respectively. In green are recently abandoned plots of land. The territories from orange to green represent the contested forestland that were cleared and vulnerable to commercial privatisation.

Map 2 demonstrates the “deforestation nuclei” in Colombia, as identified by IDEAM in 2019. Many of these nuclei correspond with the orange, yellow and green territories from map 1.

Although the Environment and Sustainable Development Ministry said 24% of all deforested areas in 2017 were caused by coca crop plantations, IDEAM’s own evidence has shown that 50% of total land change from 2005 to 2015 was from forestland to pastures and grazing lands, with only 5% being lost to coca crops. There seems to be an incongruence between the government’s number for coca-caused deforestation and IDEAM’s land change into pastures: the latter’s analysis is corroborated by other international organisations’ analyses, which have shown that 68% of deforested areas in Colombia from 2000 – 2010 have been turned into pasture lands.

While unveiling the transformation of coca fields to private pastures will continue to be difficult to demonstrate, it is clear that the current prohibitionist approach to drug policy is contributing directly and systematically to the destruction of tropical forests, a pattern repeated across Latin America. The continued criminalisation of coca will mean that its cultivation and eradication will continue to rip into new and untouched forestland, generating more deforestation. Prospects for the forest’s regeneration are slim as the land requires extensive replanting and care, needs not afforded to land being used for agricultural or grazing purposes.

Who owns the forest?

To ask who owns the appropriated land could be a potentially dangerous question. While the forest is technically public land, their colonisation transforms it into private territory. However, is it not also a grave mistake that this land is neither protected nor afforded the opportunity to recover, being instead taken over by a force that is just as extractive and environmentally violent?

Attempting to answer or challenge this question of land ownership is a potentially life-threatening task, as many of those that study, live within or defend the Colombian forest have been threatened or even killed. It is clear that the new landowners behave similarly to coca growers, with the added legitimacy that they are able to colonise the land into private pastures. The relatively poor fertility of forest soil means that cattle grazers will continue to expand into the forest, validated by the Government’s war against coca. The transformation of forestland can also be a lucrative business, especially as the Colombian government is aware of the massive growth this industry has seen in the past decade.

While there are certainly economic benefits to the cattle industry for the nation, it’s important to understand its relationship with deforestation, and what sort of long-term damage it may be doing to the environment. This already complex relationship is further complicated by international pressures for Colombia to stem cocaine exports from the nation.

The question that remains unanswered is what should be done to land after coca has been there. If it is not reforested, or protected from colonisation, then it will simply be occupied by the strongest actor in the area. Against the spirit of the peace process, this is not restoring the balance to Colombian land; it is perpetuating harms to local populations and the ecosystem, and replacing the authority of the state with private land ownership.

Continuing to pursue a policy of coca eradication will continue to displace coca cultivations, playing into the hands of private agribusinesses which are happy to have land cleared for them to colonise. This relationship needs to quickly be addressed to prevent the loss of public lands, and the permanent disappearance of forestland.

Guillermo Andres Ospina is a Colombian researcher focusing on land governance and its intersection with coca. He can be contacted at guillermo.ospina [at] ulagos.cl