Campaigning to Eliminate Violence against Women who Use Drugs Women who use drugs and their allies are fighting back against systemic violence related to prohibition and punitive responses to drug use. Source: WHRIN

The goal of the Women and Harm Reduction International Network (WHRIN) is to improve the availability, quality, and accessibility of health, social and legal services for women who use drugs. The vision of WHRIN is that all self-identified women who use drugs have unfettered access to available, quality, relevant health, social and legal services in a context of upholding human rights without stigma, discrimination or criminalisation.

Not only do women who use drugs experience much higher rates of violence than other women – at the hands of intimate partners as well as from the state – but they also lack legal recourse due to the criminalised status of their use. The interweave between stigma, gender inequality and criminalisation has created conditions where violence is not only common but also, in practical terms, sanctioned. WHRIN advocacy works to highlight these conditions ultimately aiming to end such human rights violations against women who use drugs.

With support from the Robert Carr Fund, WHRIN has been able to coordinate a small grants programme to support campaigns led by women who use drugs to expose systemic drivers of violence against women who use drugs, and advocate for comprehensive and gender-sensitive harm reduction services along with drug law reform. Over the past four years, the campaign to Eliminate Violence against Women who Use Drugs (EVAWUD) has thankfully had more and more participation from women who use drugs and their allies worldwide.

EVAWUD was founded as part of WHRIN’s effort to collaborate more closely with the women’s movement (which has otherwise tended to exclude engagement with women who use drugs and overlook the gendered impact of prohibition). After all, gender-based violence cannot be eliminated if those most affected are not directly and meaningfully involved at all levels in policy-making.

The existing UN campaign to end violence against all women was initiated by feminists in the 1980s and then marked by the UN in the 1990s, building to a yearly 16 days of activism which start on the International Day for the Elimination of Violence against Women on November 25, through to the International Human Rights Day on December 10. It uses the colour orange to ‘colour the world’ with efforts to stop violence against women. In the past EVAWUD campaigns have spanned across multiple continents, from Indonesia to Burundi, from Seychelles to Mexico, to name a few. 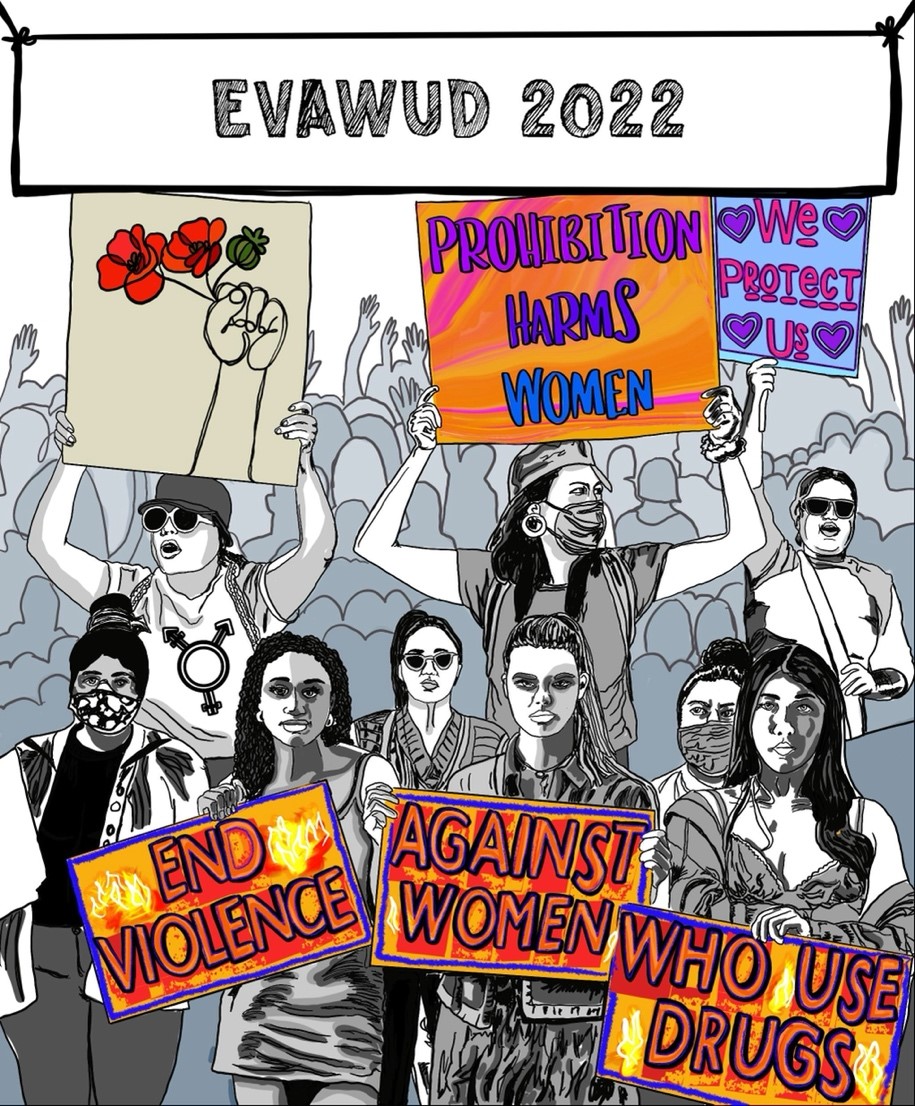 EVAWUD catalyses the collective indignation on behalf of communities of women who use drugs. Due to the energy, bravery, creativity and determination of the activists involved, EVAWUD continues to grow in scale and impact every year, and is increasingly enhanced by partnerships from fellow networks such as EuroNPUD, the International Drug Policy Consortium (IDPC), YouthRISE and, most recently, the Eurasian Women's Network on AIDS.

"I refuse to be treated as any less than a human being, my rights and my fight are just as valid as the persons’ next to me, no matter what my gender and personal choices are”.

Summaries of actions are collected in a global round up report that is shared widely. Documented actions are as varied as the communities the campaign represents: they have included awareness raising, addressing negative perceptions of women who use drugs, and presenting activists’ demands through social media blitzes; the launch of lived experience books videos and webinars; art and sport activities; press releases; public marches, demonstrations and rallies; podcasts; story-telling; formal meetings with parliamentarians, police, community lawyers, health officials and women’s ministries; national symposiums, music concerts; letter writing to women who use drugs in prison; art therapy, empowerment and self-defence classes.

- An example of the demands from Club Eney, Ukraine

The impact of the campaign has been felt in ways well beyond what could have been anticipated. In addition to media coverage and capturing the attention of governments, some campaigners have said they feel a profound sense of vindication and empowerment through their involvement. In some cases, campaigns have been the trigger for ongoing activities (such as women-only days or developing additional gender-based services) in drug user networks or harm reduction providers who wish to improve their relevance to women who use drugs. In several locations, EVAWUD activity has led to the establishment of resource packs and expanded referral networks, on-going advocacy actions, the establishment of new networks of women who use drugs and the strengthening of women’s roles in existing networks of people who use drugs.

It is high time that women who use drugs are included in feminist discourse and that weight is given to truly leaving no woman behind.

To learn more about WHRIN and collective work on ending violence against women who use drugs, as well as how to get involved, visit our website.