Weapons and Feminicides: The Mexican (misnamed) War on Drugs and Gender-Based Violence The purple "Ni una mas!" is a permanent monument - also called the anti-monument - to murdered women in Mexico and femicide in the heart of the city. Source: Thayne Tuason

The (misnamed) 'War on Drugs' in Mexico was declared in December 2006 by former president Felipe Calderon. Despite the violent results of that war and the many approaches to it that different presidents have taken, there has been a deterioration of outcomes, particularly in the form of feminicides and other expressions of gender-based violence throughout the territory.

(Author’s note: The term “feminicide” is used instead of femicide in Mexico and other Latin American countries as a political term that highlights the state’s responsibility in facilitating this crime. The state and its engendered structural violence bear responsibility for their inability to prevent this crime.)

Recent data by the National Search Commission revealed that in Mexico, more than 90,000 people have disappeared, most of them since 2006, and more than 4,000 clandestine mass graves have been found by victims' families and activists. It is difficult to grasp the size of the tragedy. The lack of consistent and transparent records complicates finding the precise number of victims.

Militarisation of public security is a continued core element of the Mexican War on Drugs, commonly understood as armament and increasing territorial force and presence. However, militarisation occurs when the state gives legitimacy to the military forces in sectors outside the traditional ‘security’-related issues. A notable current example is the active participation of the army and Guardia Nacional (which the current president is trying to militarise officially) during the COVID-19 vaccination programmes and in the new airport building project.

While Mexico has experienced an increase in general violence since the beginning of the War on Drugs, its impact on people has been asymmetrical. A gender perspective is increasingly essential to understand the complex issues shaping the War on Drugs.

How is the War on Drugs related to gender violence in Mexico?

Justification for the militarisation measures stems mainly from a prohibitionist war logic, reasoning that there is an urgent threat to the state to address at all costs. However, in reality, this (supposed) war against organised crime has been a war against people, particularly against those who are vulnerable and discriminated against, as is the case of women, the poor, the racialised and/or members of LGBTQIA+ community.

We can see that the Mexican War on Drugs has failed even under its own explicitly declared state purposes; for example, the number of cartels operating in the country have doubled with many founded by former military personnel.

The impact of this war ranges from increased generalised violence, shredding of the social fabric, and a long list of human rights violations: torture, homicides, feminicides, and enforced disappearances. The combination of the social stigma around drug-related topics, prejudices against people who use drugs, and rape culture has led authorities and the wider society to blame, dehumanise, and discredit the victims (including in feminicides), causing re-victimisation. In addition, the levels of detention and incarceration of women for drug-related crimes have increased exponentially, also impacting their families and communities.

Murders of women in Mexico

It has been commonly thought that feminicide occurs in a more private or intimate sphere, and that the War on Drugs is more related to public areas where organised crime and the state are the primary actors in the conflict, but this is not true. It is essential to challenge these embedded notions, recognising that feminicides are linked to the War on Drugs.

Three decades ago, Ciudad Juárez, a city on Mexico's northern border, captured international attention for being considered the epicentre of feminicides. In the midst of the NAFTA agreement negotiations, which created new trade dynamics between Mexico, the United States and Canada, Melissa Wright wrote important ethnographic pieces about the maquilas: factories of low-cost, high-quality, labour-intensive manufacturing, assembling, and exporting processes, where the victims of the Ciudad Juárez’s feminicides mostly worked. The violence on women was further compounded by the terrible working conditions in the maquilas, where working conditions were denounced as human rights abuses.

The feminicides that happened in the 90s in Ciudad Juárez opened discussions about economic factors that affect gender-based violence, high-demand markets, the implications of the capitalist logic of women as 'disposable bodies', the ways and significance of how women are killed and exposed, and the structural level of that violence.

The feminicides in Ciudad Juárez demonstrate that violence against women in Mexico is not new. Yet, there are new patterns that have led to the increase of feminicides and homicides of women since the Calderón government that must be recognised. Similarly to what has happened with organised crime-related violence, lethal violence against women has expanded from the northern border throughout Mexico's territory.

The feminist organisation Intersecta published their ‘Two Wars’ report on violence against women in Mexico, analysing how the confrontations in which the Mexican Armed Forces were involved had a significant impact on the number of homicides of women and feminicides between 2007 and 2018, justified by the War on Drugs. This analysis focused not only on the generalised violence that militarisation unleashes, but also on the violence provoked by the military itself. The report shows that the majority of confrontations were between armed forces and alleged criminal groups, and not always as a result of planned operations but rather caused by random patrols. 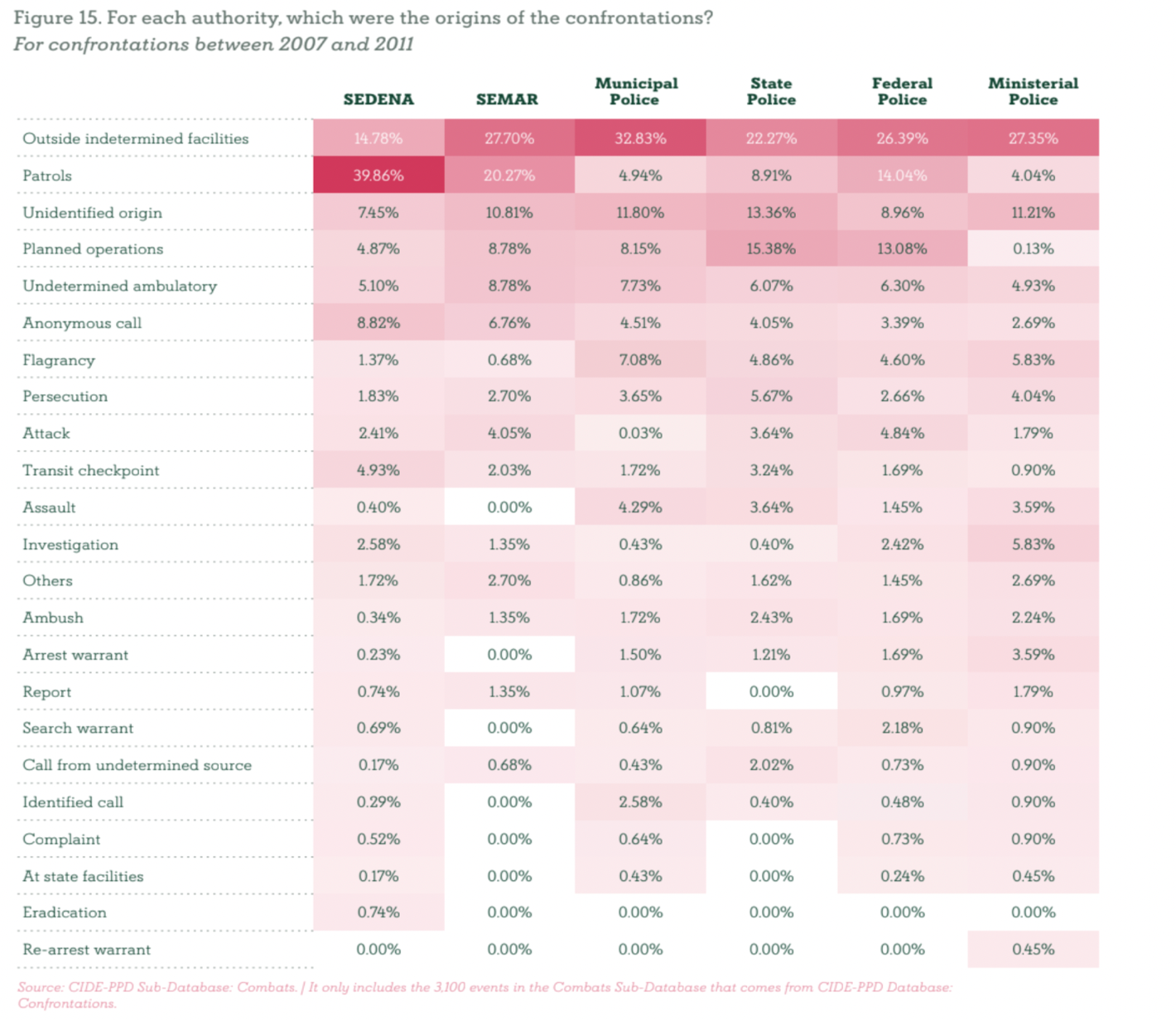 The report shows that the majority of confrontations were between armed forces and alleged criminal groups, and not always as a result of planned operations but rather caused by random patrols. The Acronym SEDENA stands for Secretariat of National Defence and SEMAR for Secretariat of the Navy. Table: Intersecta

These findings reveal how confrontations by the armed forces have directly contributed to rising levels of violence: increased militarisation has not been a strategy that has helped to protect women or diminished violence, but rather the opposite. Despite this information, the military forces continue to have their power expanded.

Equis Justicia, Intersecta, Data Cívica and Centro de Estudios Ecuménicos are Mexican organisations that coauthored a report on gender violence with firearms affirming that firearms are increasingly used to murder women: In 2006, three in ten lost their lives for firearms. Now, it is six in ten, and in some parts of the country it is almost eight out of ten.

Another study by CIDE into the increases of violence in the drug war showed that between January 2007 and October 2010, the gender gap of violent homicides with a firearm had significantly widened, going from 275 cases to 1,643 in men (498% increase) and from 19 to 155 in women (716% increase).
It is difficult to track the firearms in Mexico, as many could come from the military or the illegal market. But, in the past 16 years of the War on Drugs, the Mexican Armed Forces have received increased level of foreign ‘assistance’, mainly from the U.S, with programmes like ‘the Merida Initiative’ where they provided weapons, military training, ammunition and even dogs to the Mexican Armed Forces. Weapons have also been trafficked across the US-Mexico border, with the American Bureau of Alcohol, Tobacco, Firearms and Explosives noting in 2014 that 71.9% of the weapons seized in Mexico had arrived from the US.

It is evident that there are no blueprint or immediate solutions in a complex context like the Mexican one. Still, we know many of the counterproductive effects of strategies and logic that are pillars of the War on Drugs and must be stopped:

There cannot be justice and freedom for women in a war context. The drug policy discussions must address the gender and intersectional perspective because adding a gender lens to the analysis of this war helps demonstrate its futility and human costs. Exploring the root causes of gender violence in Mexico necessarily includes analysing the impact that this nonsensical war has on women and LGBTQIA+ people and recognising that some of the measures currently taken, such as punitive responses, may not contribute to the structural transformation needed to dismantle gender-based violence in the long term.