A slump in world coffee prices has pushed farmers in Peru’s central jungle to rip up their plants and replace them with coca leaf – the raw material used in cocaine. This countrywide trend has driven coca leaf production close to 55,000 hectares or up to 500 tons of cocaine annually – enough to satisfy annual demand in the United States three times over.

As drug trafficking routes shrank due to COVID-19 lockdowns, the price of coca leaf plummeted to half its previous levels. Although it has slowly recovered, it finished 2020 by 23% lower than a year earlier. But even so, coca offers poor farmers more security than any other crop as demand is constant.

Our research is a comparative analysis of the coca and cocaine trade in Peru and Bolivia. The aim is to generate productive debates and promote cooperation by linking farmers, policymakers, advocates and scholars in both countries. We have spent months living and working in coca-producing regions, interviewing farmers and talking to them about how they grow and market their crops as well as speaking with agricultural union leaders and local officials.

Yusbel Almonacid Santos, a farmer from the town of Satipo in Peru’s Central Jungle, reminisced about coffee’s heyday. “People were excited about coffee,” he told us. “It was the golden bean.” Ten years ago, he told us the price of coffee was high, with one kilo selling for up to US$2.70 (£1.97).

But in 2010 coffee leaf rust multiplied throughout the central jungle and destroyed the plantations. The state-run Agrarian Bank stepped in, offering loans to help farmers replant but soon after the price crashed to US$0.60.

Farming coffee requires farmers to tend plants on steep mountainsides the year round. Once a year, they contract teams of workers to bring in the harvest that then must be peeled and dried. Every year merchants demand ever higher quality and more coffee that is registered organic, which increase costs for the farmer. “Coffee creates more work than profit,” Almonacid complained .

“If the price is only 5 soles (US$1.40 per kilo) – that’s just enough to pay the people who harvest it, but for the farmer, nothing is left,” local farmers’ union leader Marianne Zavala told us. “Harvesting coffee can actually leave you in debt. Last year a lot of people didn’t even bother to harvest.”

Other crops have such a low price that they are not viable. “We took out loans from the bank to plant a hectare of bananas,” explains Marisol Díaz, a young mother. “When they were beautiful and ready, their price had dropped to US$0.40. How do we earn money at that price? Now we are in debt to the bank – we are worried they will send around the debt collectors.”

Away from Peru’s main towns, high levels of poverty are endemic. Houses are built from rough-cut planks with beaten mud floors and many do not have access to electricity, sanitation or running water. Malnutrition and anaemia is common, especially among children. “Look at what my kids are eating – just soup, I can’t afford anything better than that,” said coffee grower Alejandro Cortez, pointing to his children’s swollen stomachs.

Coca leaf has become a lifeline for these farmers. It has significant advantages as a cash crop, growing like a weed on steep slopes, in acidic soil and at higher altitudes. Coca reaches maturity after just one year and its three-to-four-month harvest cycle provides families with a regular income. 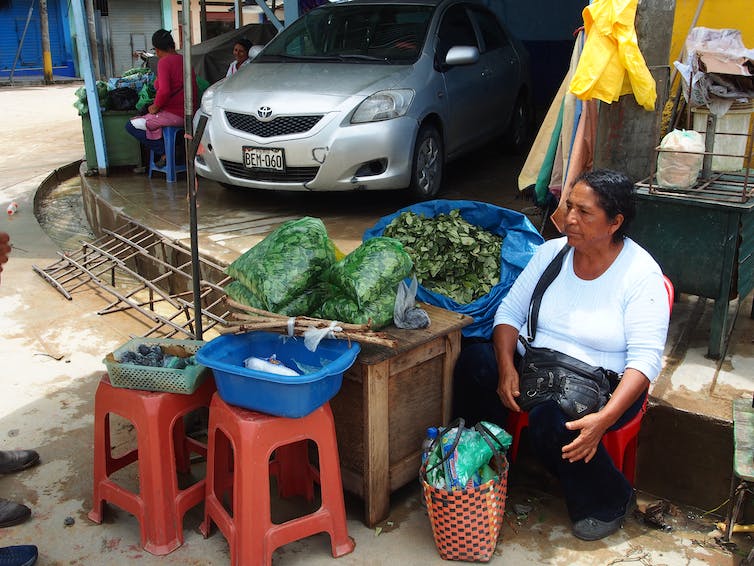 It’s also lightweight – important because many farmers must carry their products to market on their back. But, most critically, there is always a market. Coca in 25kg sacks fluctuates between US$30 to US$70, while coffee averages US$37 and has only one harvest a year. “When coffee rust killed our plants, people with a little coca survived. The rest had to abandon their land,” said Zavala. “Coca was like a small savings account.”

More than just a crop

Coca has a rich social, cultural and medicinal significance in Indigenous Andean cultures – dating back to pre-Colombian times. But since the 1970s coca has been largely grown for cocaine. Of 117,292 tons of dried coca leaf produced in Peru in 2017, 106,401 tons were estimated to be destined for drug trafficking.

Despite its illegality, farmers have few moral qualms about planting coca. Zavala said: “We are not committing a sin if we plant coca – anyone who buys cocaine, they are the guilty ones.”

The Peruvian state, backed and funded by the US, has responded to the recent coca expansion with violence – in April 2019 two coca growers were killed by government forces in San Gaban, a rural district about 1500kms south-east of the capital Lima.

And many others have been injured while defending their plantations. In the face of poverty, eradication has alienated farmers and displaced coca to new regions, including Ucayali, which in turn has put pressure on indigenous communities.

In the small town of Paratushiali, in Peru’s central jungle, locals use words such as “abandoned”, “neglected” and “forgotten” to describe their region. Roads are impassable during the rainy season, public health and education infrastructure is sparse – but more than anything farmers complained about the lack of assistance from the state to market their products. “There is no concern for small farmers – the state is more interested in repressing coca,” Rueben Leiva, a coffee turned coca grower in his mid-30s, told us.

“DEVIDA (the state development agency) is supposed to help us replace coca but they spend 80% of their budget on salaries and cars. By the time it gets to us, all we receive is a sack of fertiliser and a machete – that’s not development,” Almonacid said. “We don’t trust them, they divide us – that’s their job.”

Lack of economic opportunities, marginalisation and state neglect all fuel drug crop production and the drug trade. Eradicating drug crops alone is not the answer, the state must support farmers to find realistic economic alternatives to coca.