Interview: Adulterants, Contaminants and Co-occurring Substances in Drugs on the Illegal Market in Canada

Canadian Community Epidemiology Network on Drug Use (CCENDU)
15 May 2020 The latest bulletin from the Canadian Community Epidemiology Network on Drug Use (CCENDU), “Adulterants, Contaminants and Co-occurring Substances in Drugs on the Illegal Market in Canada”, provides a snapshot of substances found in drugs on the unregulated market in Canada, using multiple data sources to provide a comprehensive picture. In this interview, TalkingDrugs’ editor Imani Robinson speaks to Dr Matthew Young and Dr Doris Payer about their key findings.

Matthew: I’m Dr Matthew Young, I’m a Senior Research and Policy Analyst at the Canadian Centre on Substance Use and Addiction.

Doris: I’m Dr Doris Payer. I’m a Knowledge Broker, also at the Canadian Centre of Substance Use and Addiction.

Matthew: CCSA is a not for profit organisation that was created by an act of parliament 30 years ago. CCSA is like a neutral arbiter that provides evidence-based information about drug use, alcohol, and addiction to parliament. In that role, CCSA doesn't provide direct services but produces materials and resources for policymakers, for people working in harm reduction, treatment and prevention. Our website – www.ccsa.ca – has a whole section of resources on the impacts of COVID-19 on substance use.

TD: Tell me about your reasons for pulling together this report.

Matthew: The report that we recently published, “Adulterants, Contaminants and Co-occurring Substances in Drugs on the Illegal Market in Canada”, came from really a longstanding issue in Canada. It's not unique to Canada, but I think the emergence of a very large number of people who had opioid use disorders crossed with a drug supply that was becoming increasingly contaminated when fentanyl was introduced back in 2013, and then has just become increasingly unpredictable and toxic.

One of the things that fentanyl introduced into an already problematic drug supply was increased uncertainty. Its potency makes it harder to mix up with bulking agents so you end up having batches that have variable potency. We've seen an increase in novel benzodiazepines in the in the drug supply, and sometimes synthetic cannabinoids, which adds that level of complexity and danger, and makes it harder for people to use safely. I think the people who use drugs in Canada have adapted to the knowledge that there is fentanyl in the supply, but it still is it's an unpredictable amount.

Doris: It’s not just fentanyl anymore. We are now seeing carfentanil in the drug supply, which is even more potent than fentanyl. And on top of making drugs riskier to take, adulterants are making overdoses more difficult to reverse. For example, a person who overdoses from an opioid that’s been cut with a benzo doesn’t respond to naloxone the same way because, something like a benzo isn't affected by naloxone. This means that an individual may start breathing again but doesn’t wake up. And so folks are spending more time being unconscious: if these things depress your breathing, it’s more dangerous.

Matthew: On top of that, we get reports from paramedics or peers who say that the synthetic opoiods can be so strong that when the naloxone wears off the overdose returns. So there was a recommendation for a while of having multiple doses of naloxone on hand in case of that kind of situation. It adds a complexity that is very difficult to navigate.

Doris: [back to report at hand] We also coordinate a drug checking working group. We pull together folks who provide drug tracking services and those who do research on those services as well as policymakers who benefit from the outcomes of those services. This came about because there's a drug checking service here in Ottawa called Oasis, and they started putting out flyers on drug checking results, listing of all the substances that were contained in the samples people submitted. And I brought that to CCSA and it blew people's minds! It became obvious that the general public doesn’t necessarily know that many substance poisonings occur because people don’t know what substances they are buying. So this bulletin was an opportunity to really pull together some numbers and quantify the extent of contamination in drugs bought and sold in the illegal market in Canada.

TD: Tell me about your work with the Canadian Community Epidemiology Network on Drug Use.

Matthew: The group that facilitated the production of this report for us is called the Canadian Community Epidemiology Network on Drug Use (CCENDU). It’s a sentinel surveillance system led and coordinated by CCSA. People who work in harm reduction, in monitoring trends and sometimes in drug policy across Canada monitor the local situation and feed information into a central point and then we (CCSA) collate it, put it out and try and disseminate and share that information. Sometimes this information is epidemiological, such as looking at fentanyl deaths: we put out a report on that in twenty fourteen. We also share information about what different people are doing, such as the availability of take home naloxone or about anything that we know about what's in the illegal drug supply.

This brings me back to why we connected with Release. We’re currently putting together a follow-up CCENDU bulletin looking at how the COVID-19 pandemic is impacting the illegal drug supply. We really want to understand the drug market and drug purchases during the COVID-19 pandemic but we've had a very difficult time sourcing that data. I've consulted with a lot of partners and we're not alone in that. It's very difficult to assess because a lot of the data sources have dried up or there's not much activity in that area. The reason we became connected with Release is because we are interested in your survey on the impact of coronavirus on drug purchases. 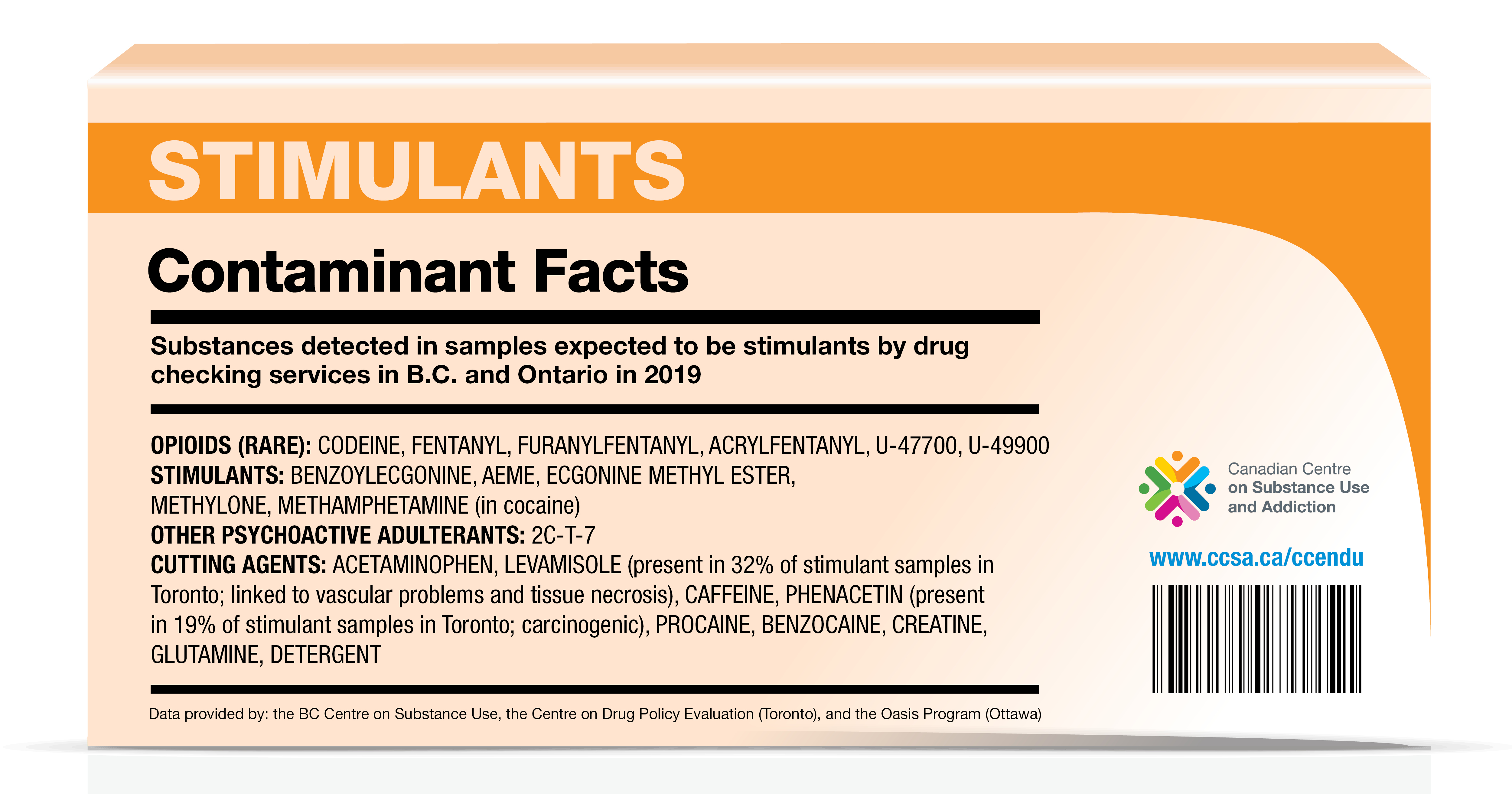 TD: Going back to the bulletin, was there anything that was surprising or unexpected in your findings? Did that illuminate anything new or help you prioritise your work in any way?

Doris: A lot of the bulletin we have just released (Adulterants, Contaminants and Co-occurring Substances in Drugs on the Illegal Market in Canada) was about putting numbers to concepts we already knew. The most surprising thing to me is the amount of regional variation. For example, fentanyl was found in more of the samples from western Canada than in the east. It was surprising to see just how much it differs, not just availability, but also contamination.

Matthew: There is a bit of a historical factor that flows in there. If you look back on the early 2000s, we didn't see as many opioid prescriptions in the province of Quebec. And then east of Quebec is a very small population and tends to have the same kind of drug trafficking supply routes. I think a big part of it is that there wasn't really a market created in the east, whereas in the rest of Canada, as well as in the states, that critical mass of people who used opioids was already there. Then more were driven by the widespread prescription of OxyContin and other kinds of opioids. So I think just as a departure point, that set the stage. And then, at a certain point, it continued to evolve that way.

TD: What are the key issues that you're focussed on right now? What can people be doing to either support your work or to support people who are using drugs in Canada?

Matthew: Although there are new substances on the horizon, they aren't necessarily the main issue when it comes to COVID-19. There is indication that supply is drying up a little bit. And so that means that the drugs are being cut with more bulking agents and that people are having to go without. That's just going to have a lot of very predictable consequences, such as people are going to be having to go without and maybe potentially go into forced withdrawal. And then when access comes back again, they're at increased risk of overdose.

Doris: As Matthew just mentioned, we’re doing a follow-up CCENDU bulletin looking at the impact of COVID-19 on the drug supply and services. It's really hard to get data right now. I think it has been a huge support knowing that the Release survey is out there and that we can replicate something like that here in Canada. I think it just comes down to making as much data available as possible.

Matthew: It's the people who are doing the drug checking and providing other direct services to people who use drugs that deserve kudos. They are the ones who are out there risking themselves and doing the important work to keep the population of people who use drugs safe. We (at CCSA) also provide a valuable service, pulling everything together, centralising it and organising it and trying to get that information back out to people but it's really because of people providing direct service that we're able to do our work. They're the ones who are doing the hard work!

This CCENDU bulletin provides a snapshot of substances found in drugs on the unregulated market in Canada, using multiple data sources to provide a comprehensive picture.

>> Background: why have we collated this information?

We know that risks associated with substance use significantly increase for drugs acquired on the illegal market, where there is no quality control and drug contents are unpredictable. Though this fact has been well known among people who use drugs and those who provide direct services to people who use drugs, there has been no comprehensive assessment that quantifies the extent of contamination in drugs bought and sold in the illegal market in Canada, until now.

>> What data did we collect?

>> Why is this bulletin useful?

It aims to raise awareness among people who use drugs, direct service providers and policy makers that drug contamination is extensive, pervasive and contributes significantly to drug-related harms. This information can help efforts to address the current overdose crisis by informing harm reduction activities and promoting dialogue around possible solutions. It can also provide a baseline for assessing shifts in the drug supply as a result of the response to COVID-19.

>> Potential next steps include: