Drug Policy Should Protect Social Leaders, Not Expose Them Lucas Marín Llanes recently published an investigation for the International Journal of Drug Policy on how the Colombian crop substitution programme is impacting social leaders, and in some cases leading to their death.

Recently, I visited Putumayo and Guaviare, departments located in southern Colombia, on a field trip to study the recent crop’s substitution programme (PNIS by its Spanish acronym). The PNIS offered economic incentives to coca-growing households to substitute their coca cultivation for legal products such as cacao, coffee, amongst others. This programme was designed during the negotiation of the Peace Agreement between the Colombian Government and the former Fuerzas Armadas Revolucionarias de Colombia (FARC). After the final Agreement was reached, the PNIS began its implementation in 2017 and benefitted 99,000 households.

One of the aims of the field trip was to interview social leaders involved in the promotion of the programme. In Colombia, social leaders are local activists that promote and protect the interests of their communities. Additionally, social leaders are not passive actors in conflict contexts. Through their leadership and social cohesion, they oppose the interests of armed groups and the expansion of illicit economies. Social leaders have been facing greater risks since the Peace Agreement, mostly due to territorial disputes between the remaining armed groups. Moreover, the leaders I spoke to identified the promotion of the PNIS as an increasing risk factor towards them and their work. I addressed this empirical question in my recent publication in the International Journal of Drug Policy.

In Colombia, multiple sources monitor violence against social leaders and report their killings. In my paper, I used ‘Somos Defensores’ data as it is the NGO with the longest data series on social leaders’ killings. Even if there are some differences among sources, all of them report an increasing trend in recent years. 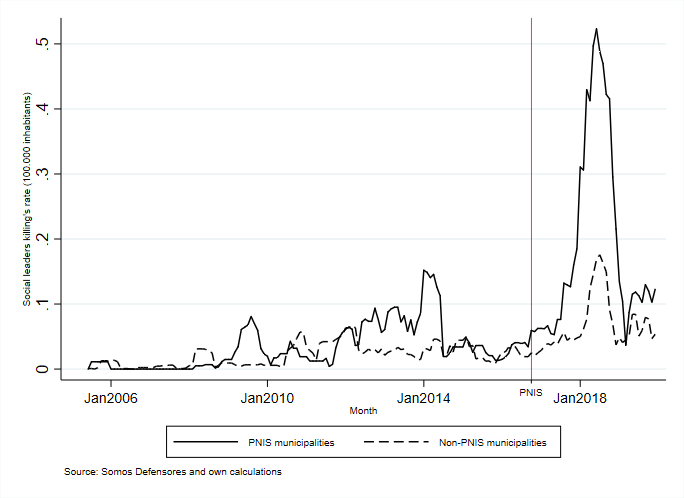 Additionally, I explored other effects of the PNIS based on municipality’s characteristics. The programme increased social leaders’ killings in municipalities with lower density of coca crops. This finding is potentially explained by social leaders’ stronger opposition to armed groups’ interests in areas where their control is not consolidated. Consistent with previous literature, the programme increased social leaders’ risk in regions with presence of armed groups and disputes for territorial control among these actors.

These results have compelling policy implications for drug policy. This is the first paper, to the best of my knowledge, which empirically identifies unintended consequences of crop’s substitution programmes like the PNIS. These interventions should protect communities and social leaders instead of exposing them. Holistically, instead of focusing on the number of coca acres, drug policy should improve households’ wellbeing, starting with security conditions. The design of crop substitution programmes must include security and intelligence mechanisms to anticipate the increased risk that communities and social leaders will face. In Colombia, other policies - such as land restitution - in conflict-related territories included intelligence boards to ensure greater security for the community and reduced violence against social leaders. It’s possible to replicate this mechanism for future policy designs and guarantee security for communities and their leaders.

Lastly, there are several opportunities to build evidence on the PNIS as it is the world largest crop’s substitution programme in terms of beneficiaries’ households (99,000) and government expenditure (representing 0.4% of the national GDP). It is necessary to determine its effects on coca crops and households’ socioeconomic conditions. In this sense, an evaluation of the efficiency of each component of the programme is also required for future designs.

Drug policy in Colombia should move forward and towards desirable objectives: protection of social leaders, households’ socioeconomic conditions and forest conservation. Consistent with these objectives, the United Stated has recently reoriented its drug-related relationship with Colombia, and policy makers should take advantage of this opportunity to implement innovative interventions such as the intelligence mechanism previously described, additional payments for ecosystem services, substitution of coca crops for forest conservation, amongst others. In this direction, academia and policy makers can employ methods such as randomized control trials (RCT) to evaluate innovative drug policies and increase our understanding of interventions, in turn promoting efficient, desirable and safe programmes for local communities.