AI-assisted art has been taking the world by storm, providing a new world-building method that leverages the width of the internet’s resources to construct and imagine new realities.

TalkingDrugs teamed up with Mike Whyle, a South African artist with experience in cannabis cultivation, to employ AI art to tackle the question of what drug consumption rooms could look like in a (hopefully) not too distant future.

While legal consumption rooms currently exist through a medical framework, emphasising safety and public health over “recreational” enriching experiences, we decided to go beyond these current limitations and imagine an ideal drug using space, as utopian as that may feel right now.

While the offered images may not be realistic now, they’re an exploration of what could possibly be real, focused on guiding principles of love and respect for nature and a holistic view of a healthy life.

AI-assisted digital art is still in its infancy, but I have no doubt that its impacts will be immense and far-reaching. Today we run python codes – the building blocks of the metaverse – to construct dream machines. Tomorrow we'll be able to inhabit them.

As an early adopter of this tech, I'd previously only really used it for flights of fancy, escapism – a form of digital hallucination, reliably releasing dopamine into the brain, especially when finding aesthetic images. As such I was hugely excited to test its potential for a real-world project.

The brief, to have text-to-image AI envisage what legal and socially accepted drug consumption spaces could look like, soon proved to be a vibrant wellspring of intersectional ideas to imagine spaces where adults are allowed full sovereignty over their bodies and minds, as well as the future we want to create.

While I’m wary of resorting to simplistic "drugs are the Panacea to all global ills" type narratives, as humanity's problems run deeper than prohibition, there are aspects of positive socio-economic progress that the existence of these spaces would suggest.

The French and English coffeehouses analogy – melting pots of spaces where ideas were shared freely, alternative narratives entertained, and substances shared – is one example of the type of positive outcomes such spaces might induce. The safe spaces in South and Middle America where sacred shamanic plant medicines like ayahuasca are ceremoniously consumed as a form of soul therapy, is another.

Here in South Africa there is a (largely undocumented) subculture of psychedelic drug use sessions among friends as a way to connect with nature, validate each other, or just take breaks from normal life. In this context, a lot of discussions centre around emotional “space keeping”, as well as physical facilitation of a meaningful shared journey. These sessions served as a personal point of departure to explore this project.

This got us thinking about not only how the spaces would look, but how they could look considering the associated contextual (historical, environmental, technological etc.) changes that would need to happen to facilitate the existence of socially accepted, legal consumption spaces that have positive rather than negative connotations around drug use.

I soon realized that health and wellness - both internal and external – would be integral aspects. I imagined spaces that are therapeutic, but not medicalised (hence their proximity to nature), but with access to emergency services if ever needed. Spaces where you can go to “zone out” for a while, and experience quietude and contemplation, as well as social bonding and revelry, revitalizing and reinvigorating you so that you return to “normal life” with a renewed resilience. The healing powers of nature itself are a key piece of this puzzle, and a reason that such religious ceremonies largely take place outdoors “inside” nature. 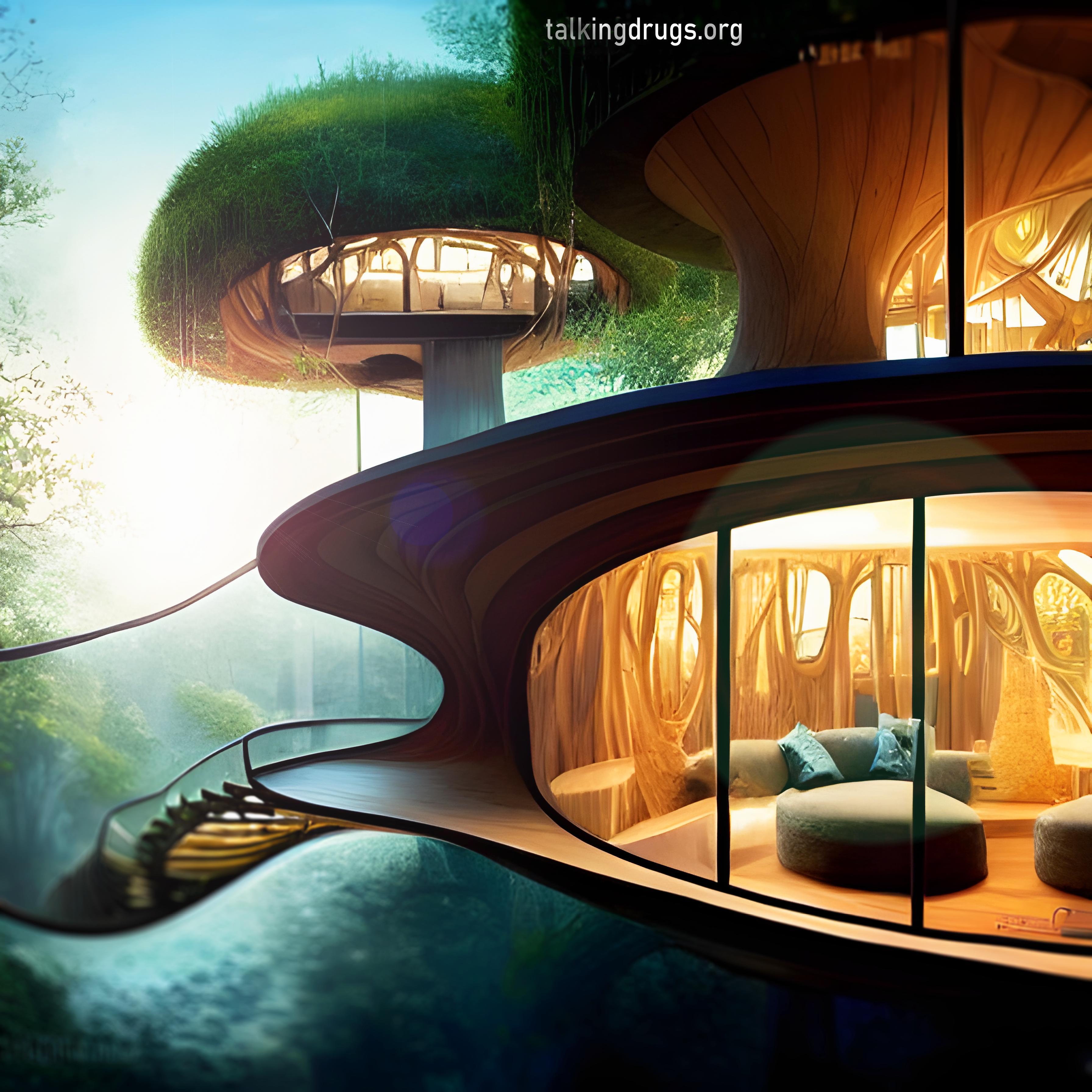 The overarching concept of the treehouses, inspired on a natural setting for drug use. Both within water, suspended mid-air and above the canopy, each space allows for social seclusion as well as contact with our surrounding environment. 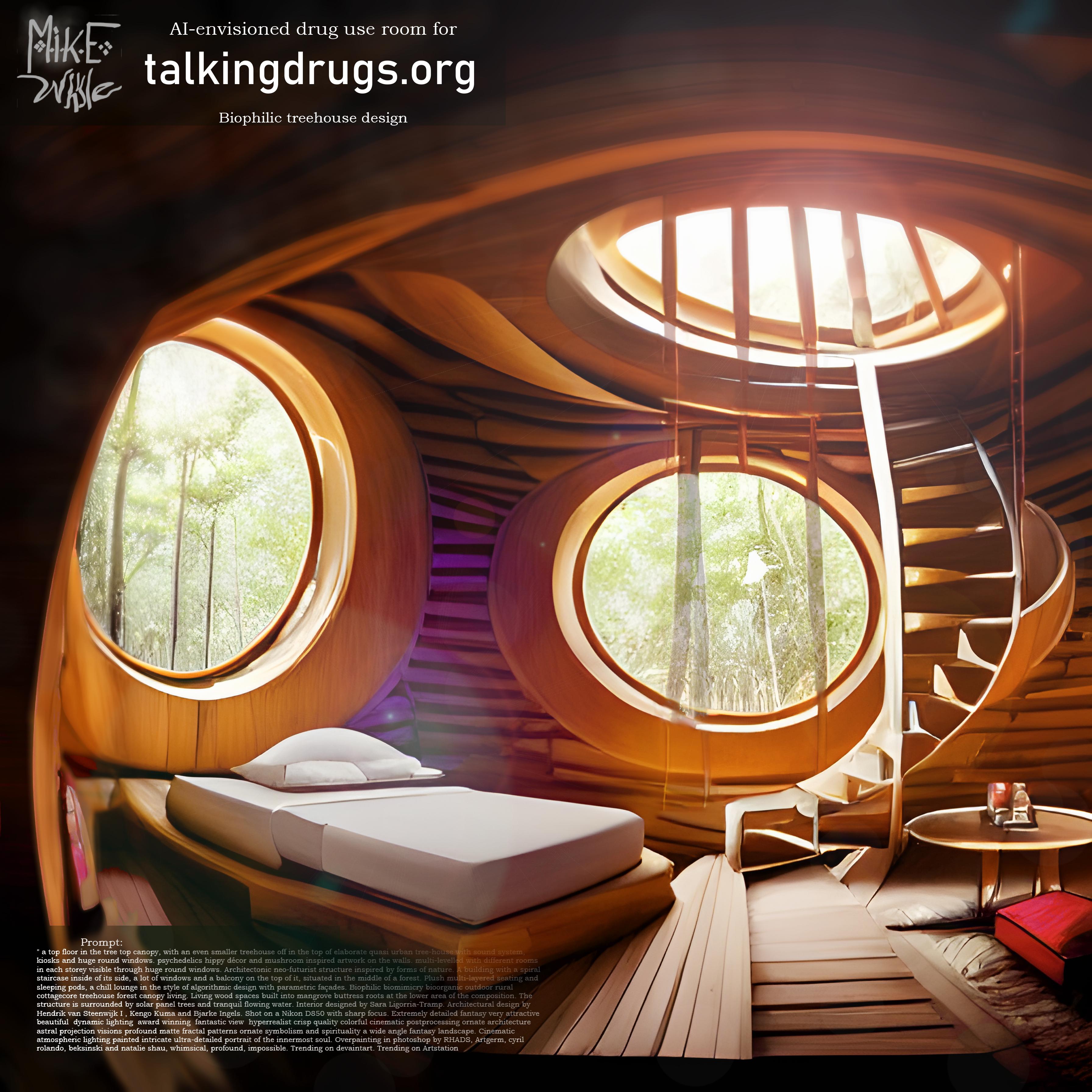 Further details of the interior of these spaces, designed for comfort, natural materials, open views into the surrounding environment, and levels to explore the mushroom-like treehouses. 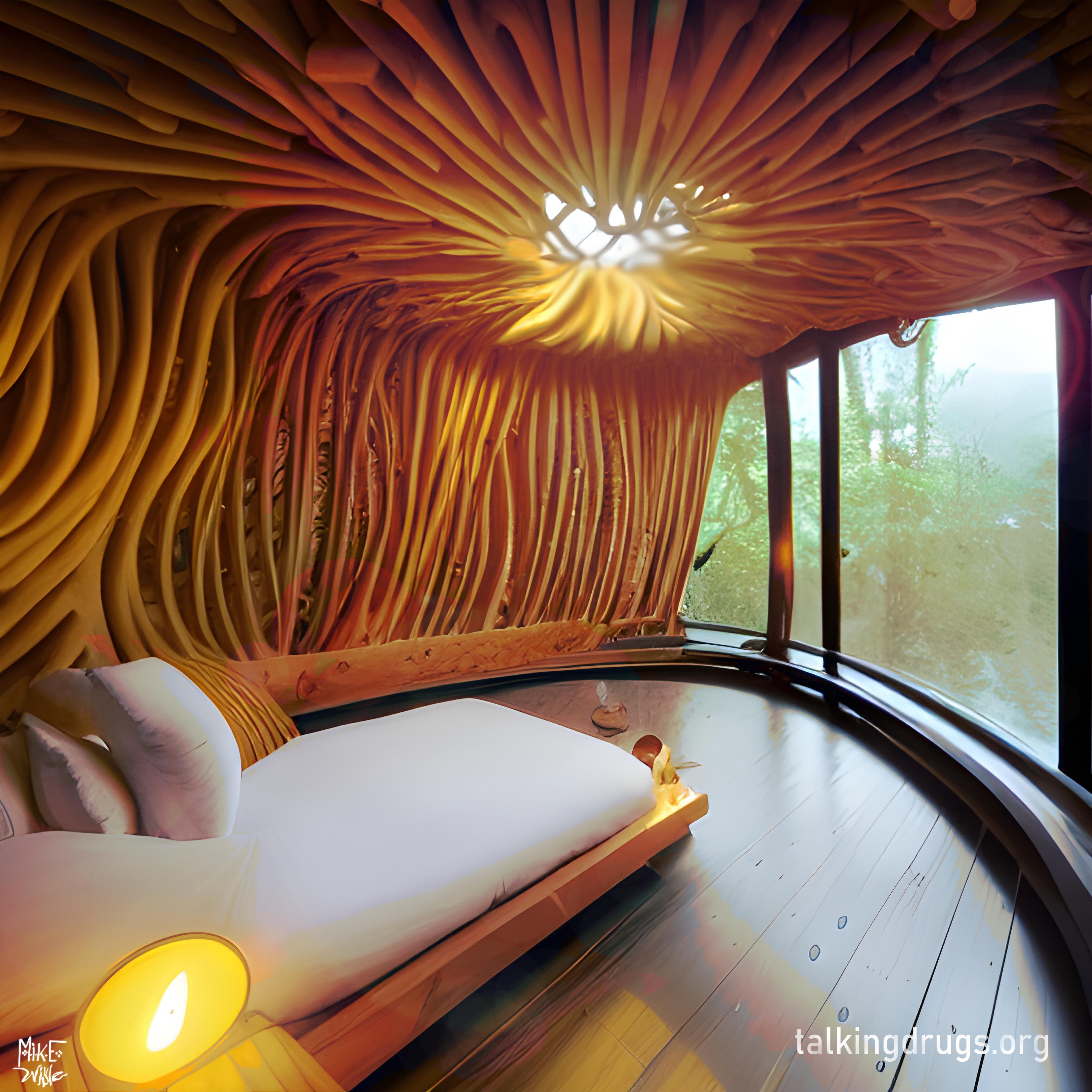 Details of other rooms, with the walls an ceiling mimicking the lamellae (gills) of mushrooms. Soft lighting with expansive views in these more private rooms allow for individuals or small groups to enioy their mental and surrounding landscapes. 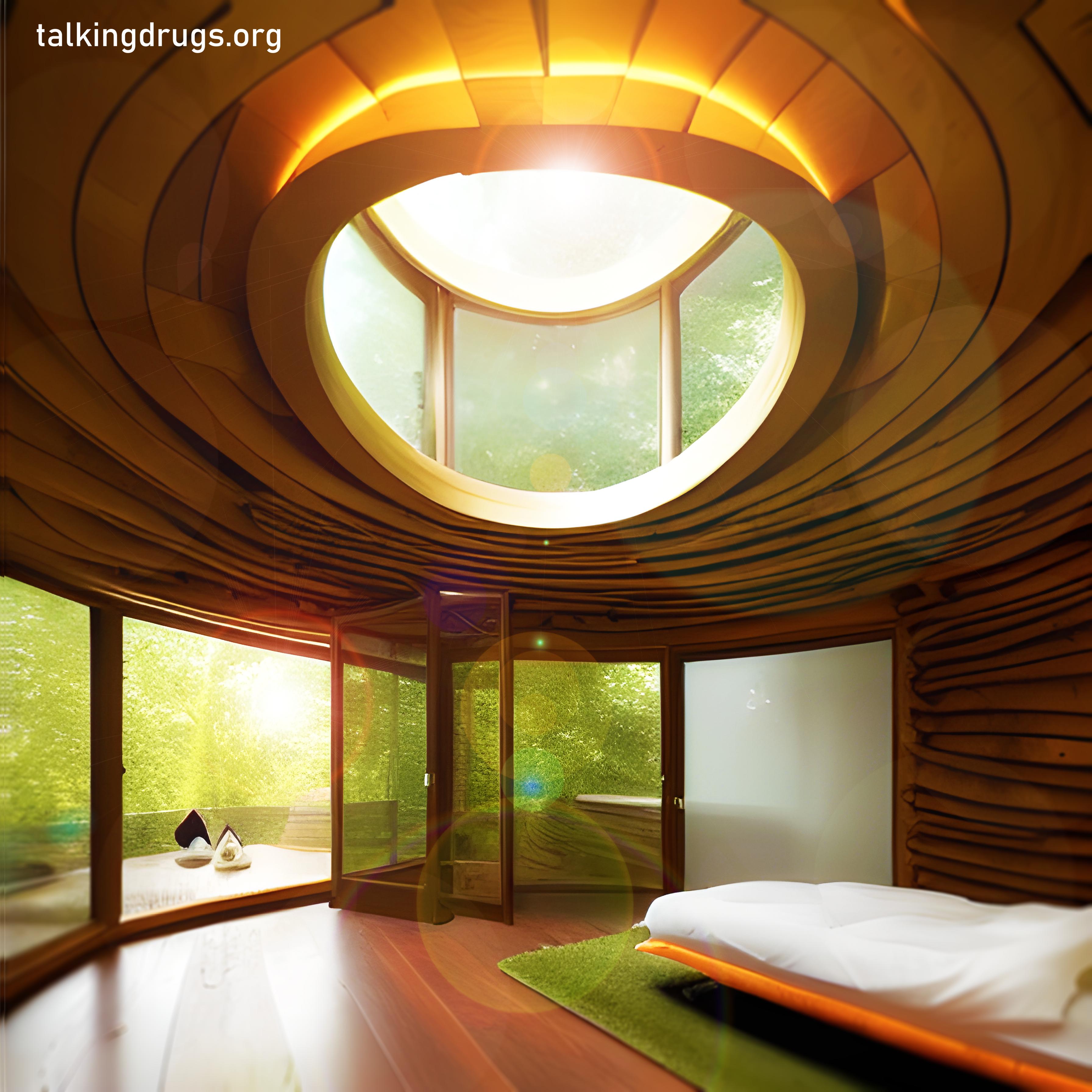 Ribbed textures of roots on the wall, with natural light spilling in from all directions. Closely located yet protected from nature means such spaces could be enjoyed at any time of the day or in any weather. 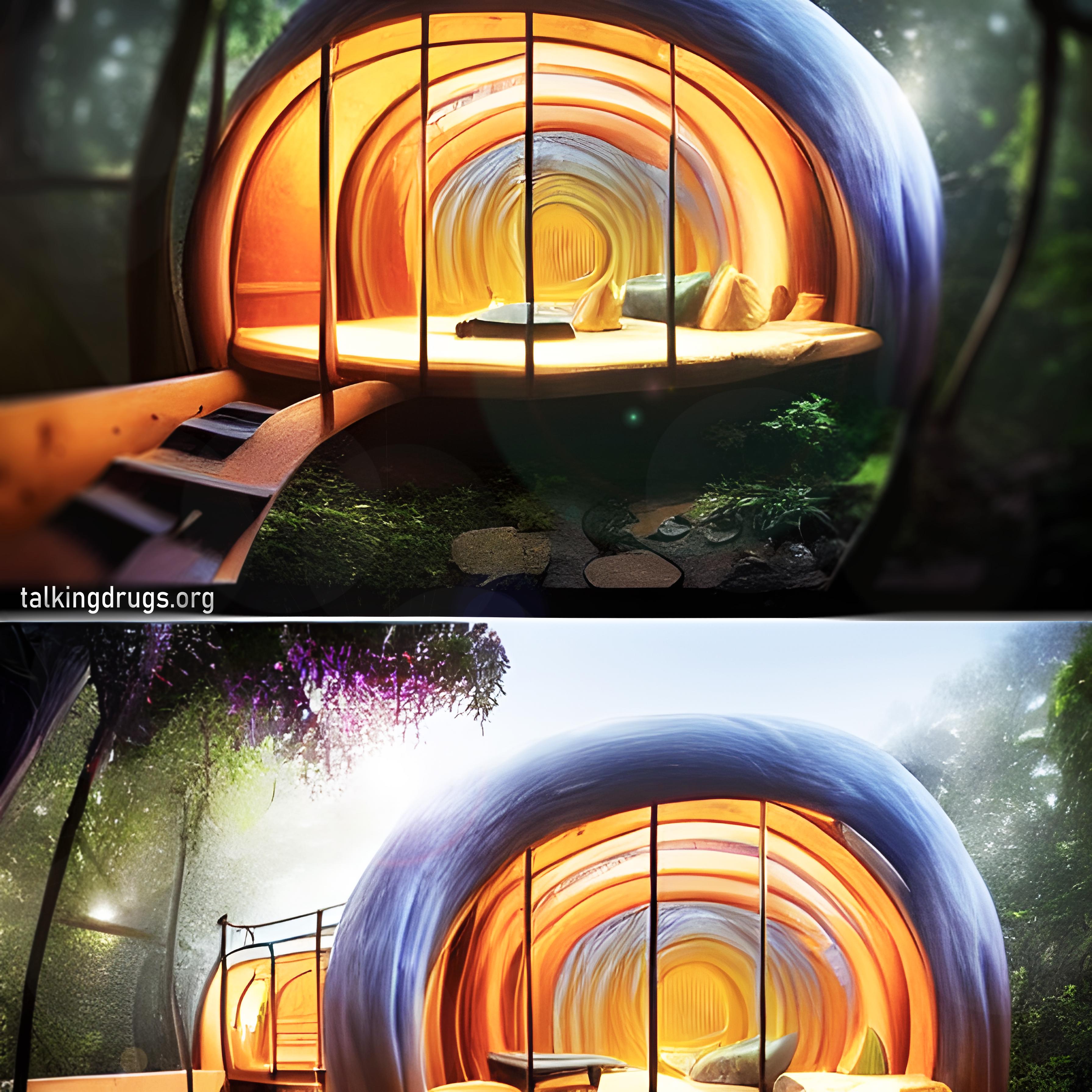 These indoor-outdoor buildings are an architectural metaphor for the connection between ourselves and our ecosystem, our mind and our surrounding universe. The warm lights could be a guiding beacon, particularly when exploring greenery at sunset. 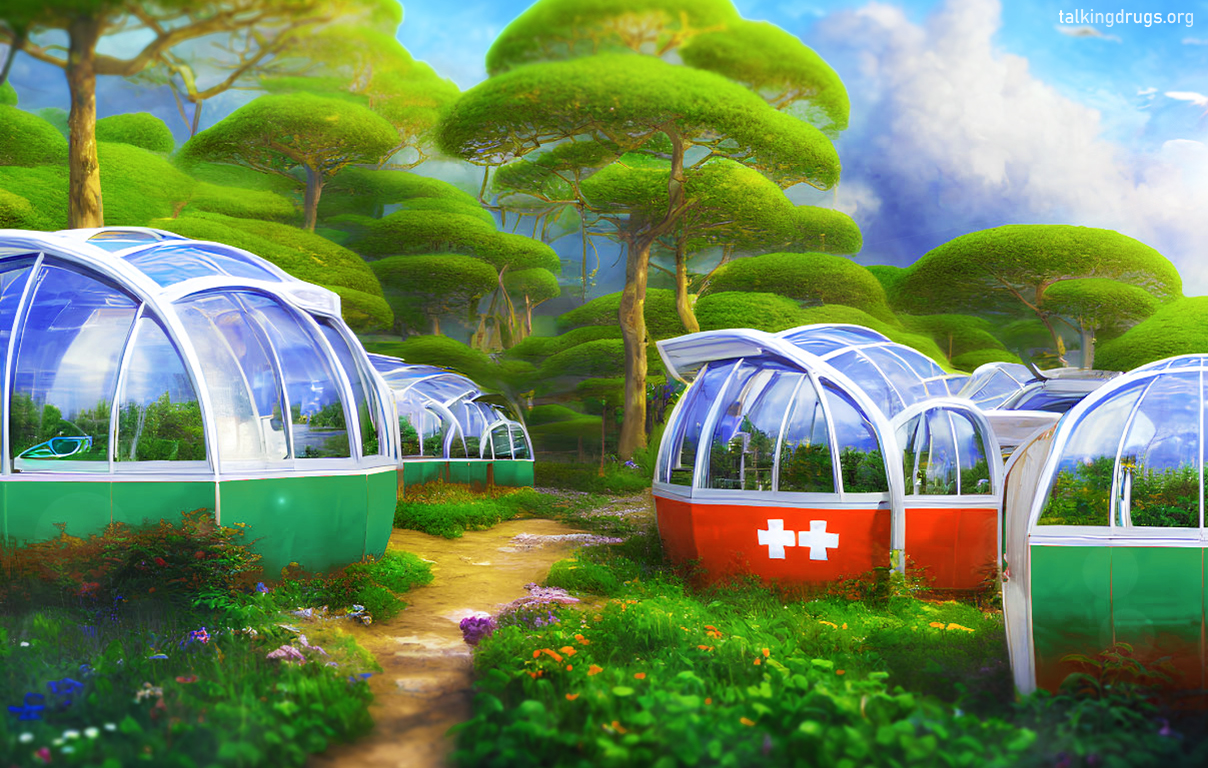 An exploration on how individualised domes could exist, embedded within greener spaces for exploration. These domes could also be used to grow crops to improve the sustainability of spaces. Well demarcated spaces for recovery and medical attention are useful signage for health-related services.

Biomimicry, biophilic design that non-invasively integrates into nature, suggests that humans are situated within nature: a part of it, not above it. In the future, it may even be possible to grow living treehouses for eco-friendly accommodation, while other species of plants are engineered for the purposes of wall-paper, biodegradable packaging, and bioluminescent lighting! 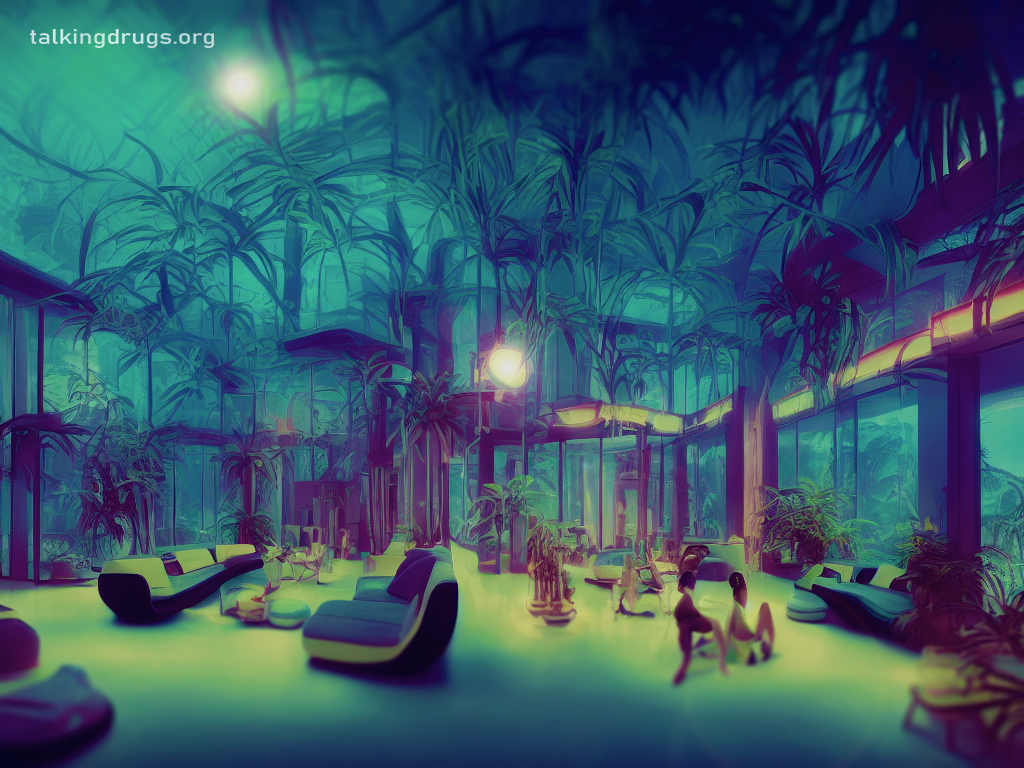 A human greenhouse: comfortable seating across a wide hall, surrounded with flora that can create private alcoves for groups of psychoactive travellers. The blue and green tones could be replicated with lighting, providing an aquarium-like environment for people to enjoy their experiences. 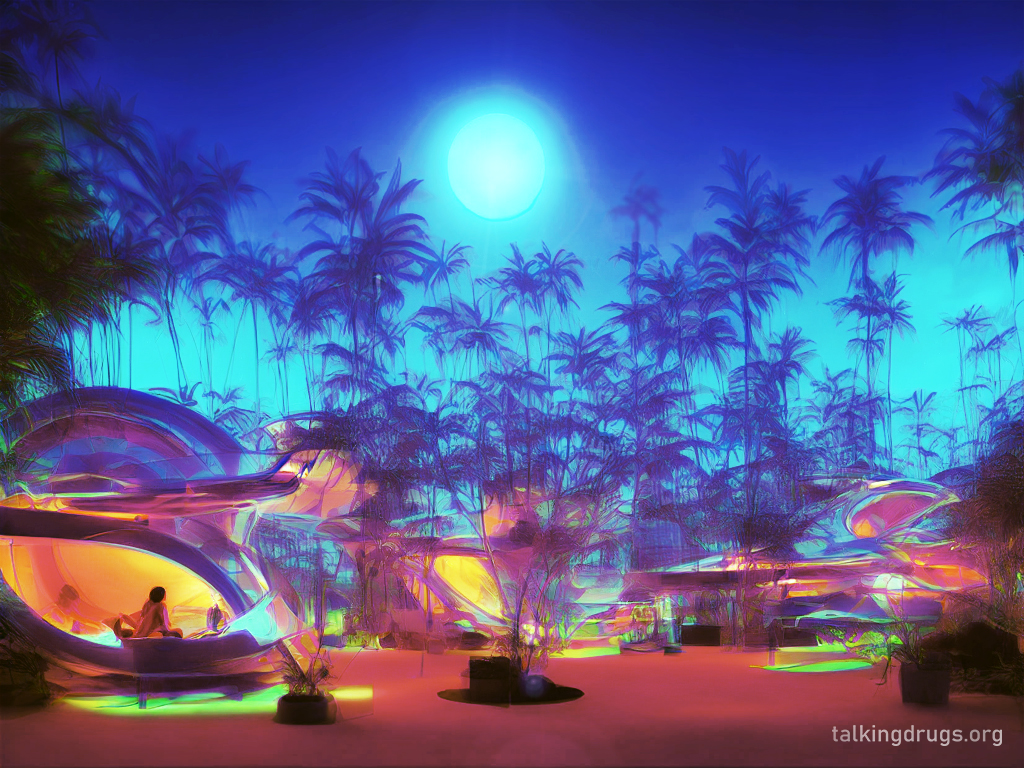 A more greenhouse-inspired drug using place, this time demonstrating several smaller pods connected within a larger space. This allows for intimate experiences while still protected in immersive greenery. These design elements take on a more futuristic look, yet with no hard lines or angles as they aren't found in nature.

The concept of internal/external health and wellness are also crucial for exploring any different modes of conscious thought. Imagine if food and beverage were produced sustainably on site at these spaces to optimise wellness. Food kiosks with food, snacks and beverages that are locally and sustainably produced on site at these spaces could augment the psychedelic and therapeutic drug offerings, in a symbiosis geared towards optimum human wellness.

This in stark contrast to dystopian late-stage capitalism futurist scenarios where technofascism has almost annihilated nature, and populations of impoverished masses are subdued and coerced with mass-produced drugs of questionable benefits.

As another aside, some researchers have suggested that it is largely the conditions we live in under late-stage capitalism that trigger addictive behaviours. It's worth asking ourselves: if we solve societal problems like scarcity and inequality – entirely feasible with current technology – would people still engage in addictive drug behaviours in these spaces? Or, with many triggers erased, would we naturally trend towards a moderate and balanced holistic drug use? I would venture that these spaces, much like the Amsterdam coffee shops by the canals, and vineyards with on-site tasting, would amplify, rather than subtract from, our experiences of life.

Although it's easy to have AI envision beautiful recreational and relaxation spaces, it is a big challenge to get pictures that explicitly show the spaces as purposed for drug use specifically. Short of having 'stoned-looking' human figures, I haven't yet devised an adequate solution to this.

While this was an artistic exploration, limited by the algorithms’ ability to imagine a future beyond what already exists, it is hopefully a first step in illustrating some of the key values that we should uphold in drug consumption, particularly in its potential to ground us in nature and our surrounding environment.

Some of the prompts used by Mike included:

A long Prompt: " a top floor in the tree top canopy, with an even smaller treehouse off in the top of elaborate quasi urban tree-house with sound system, kiosks and huge round windows. psychedelics hippy décor and mushroom inspired artwork on the walls. multi-levelled with different rooms in each storey visible through huge round windows. Architectonic neo-futurist structure inspired by forms of nature. A building with a spiral staircase inside of its side, a lot of windows and a balcony on the top of it, situated in the middle of a forest. Plush multi-layered seating and sleeping pods, a chill lounge in the style of algorithmic design with parametric façades. Biophilic biomimicry bioorganic outdoor rural cottagecore treehouse forest canopy living. Living wood spaces built into mangrove buttress roots at the lower area of the composition. The structure is surrounded by solar panel trees and tranquil flowing water. Interior designed by Sara Ligorria-Tramp. Architectural design by Hendrik van Steenwijk I, Kengo Kuma and Bjarke Ingels. Shot on a Nikon D850 with sharp focus. Extremely detailed fantasy very attractive beautiful dynamic lighting award winning fantastic view hyperrealist crisp quality colorful cinematic postprocessing ornate architecture astral projection visions profound matte fractal patterns ornate symbolism and spirituality a wide angle fantasy landscape. Cinematic atmospheric lighting painted intricate ultra-detailed portrait of the innermost soul. Overpainting in photoshop by RHADS, Artgerm, cyril rolando, beksinski and natalie shau, whimsical, profound, impossible. Trending on devaintart. Trending on Artstation"

But because this prompt is so long, it's questionable how much the SD AI can consider and weight every word. Likely some are left out, or at least have a noticeable impact, but that's why you reroll, and cherry pick from several batches