Five of the Most Repressive Countries for the War on Drugs

Rodrigo Duterte, the new president-elect of the Philippines, is making headlines with calls for the vigilante killing of drug-offenders, as well as the reintroduction of the death penalty.

Earlier this month, Duterte - known as “The Punisher” – told the public how to respond if they encounter a drug offender, saying: "please feel free to call us, the police, or do it yourself if you have the gun - you have my support”.

His proposed repressive practices and harsh strongman rhetoric are bound to have serious consequences once he takes office on June 30, particularly if he is successful in reinstating capital punishment. However, in the global landscape of drug policy, Duterte is not alone with his approach to drugs.

Here are five countries with some of the most repressive drug policies:

China is estimated to have executed more drug offenders than any other country, with at least 600 executions for drug offences in 2014. However the true figure may be higher, as death penalty data is considered a state secret, and public statements on drug policy are rare.

Shen Tingting, a Beijing-based human rights advocate, has described how people who use drugs are often detained for years without trial, and endure "public humiliations, social exclusion and inadequate treatment".

In 2015, President Xi Jinping condemned drug offences as a national security threat, promising an unrelenting war against drugs without "rest until a sweeping victory". Since then, China's top court has intensified its punishment towards drug-related offences. For example, an individual may now face the death penalty for possession of 500 grams of ketamine - though the minimum for such punishment was previously one kilogram.

Since the inauguration of Joko Widodo as president in late 2014, the number of drug offenders being executed in Indonesia has increased, according to a report by Harm Reduction International. In a televised speech, two months after gaining power, Widodo refused to grant clemency to drug offenders on death row, and asserted that “this crime [of drug trafficking] warrants no forgiveness”.

In 2015, the government's narcotic agency published data from a study that claimed that 33 drug-related deaths occur each day in Indonesia, though international experts have contested the validity of the study's methodology. Regardless, Widodo used the study’s results to justify punitive responses to what he described as a “narcotics emergency”. Two people were executed for drug offences between 2012 and 2014, while 14 were executed in 2015.

Reuters has reported that Indonesia will execute 16 prisoners in July 2016, and a further 30 in 2017. Although the identities and convictions of all prisoners has not been confirmed, a spokesperson for the attorney general defended the executions as they "save our future generations [from the] narcotics emergency". 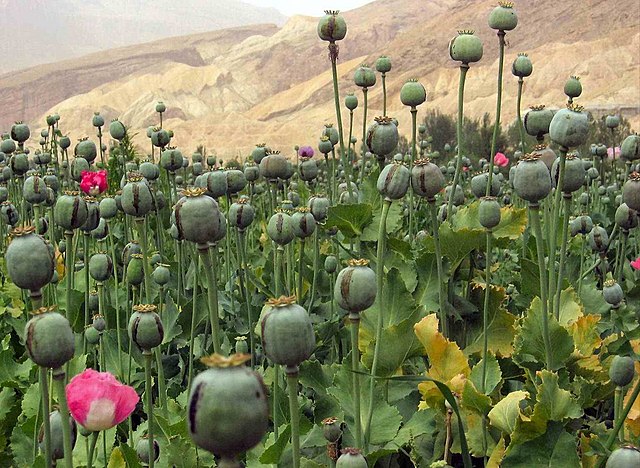 The high rate of opiate use among Iranians may be attributed to the prevalence of the opium poppy in neighbouring Afghanistan (Source: Wikimedia)

Iran is one of the world's most prolific executioners. Between 2012 and 2014, the government executed 1,137 people for drug offences, which represents over 50 per cent of people who were executed in this period. Authorities rationalise such actions by pointing to the high rates of drug use in the country.

The UN's World Drug Report 2011 indicated that Iran had the second highest rate of opiate use in the world, with over two per cent of the adult population (aged 15-64) reporting use during the past year. Part of this is could be attributable to Iran’s 936 kilometre border with Afghanistan, the world’s largest opium producer, and that Iran is used as a major route for traffickers moving opium to the EU.

The EU has been funding Iran’s counter-narcotic programme, and thereby helping finance the execution of drug offenders. Implementing capital punishment for drug offences has become so prevalent, the Independent reports, that in the village of Sistan, there are only women and children; every man has been executed for drug offences.

In an interview with Italian newspaper, Corriere Della Sera, Hassan Rouhani – the president of Iran - justified the continuation of capital punishment: “If we abolished the death penalty we would enhance [Afghan] drug trafficking up to the European countries and that would be dangerous for you”.

In Saudi Arabia, the number of executions for drug-related offences has dramatically increased in the past three years; 22 people were executed for drugs in 2012, while 41 were executed in 2014. Between January and June 2015, Saudi authorities executed 47 people for non-violent drug offences.

The Saudi Arabian regime uses Sharia law to justify its strict punishments for drug offences, although such offences – and the punishments for committing them - are not defined in Islamic jurisprudence. Saudi authorities use this legal circumstance, defined as ta’zir, to make discretionary – and often deadly - judgements on drug offences.

Since 2003, Singapore has reduced its implementation of capital punishment for drug offences, and has demonstrated leniency towards individuals able to prove they were simply drug couriers. Nonetheless, mandatory capital punishment persists and applies to the possession of a requisite quantity of drugs, such as 500 grams of cannabis or 15 grams of heroin, which is considered drug trafficking. Drug possession is presumed if one possesses keys to the property or vehicle in which the drugs were discovered.

At the United Nations' special session on drugs in April 2016, the Singapore delegation rejected calls for progressive drug law reform; "For us, the choice is clear", claimed the Minister for Home Affairs and Law, K. Shanmugam, "We want a drug-free Singapore, not a drug-tolerant Singapore".