New App Will Help if You’re Arrested for Drug Possession A new app has been launched to help the thousands of people prosecuted for drug possession every year in England and Wales.

The mobile and tablet app Legal Aide was developed by lawyers at Release, the UK’s centre of expertise on drugs and drug laws. It provides a step-by-step guide for dealing with a drug possession offence, including informing people of what to say and do in the police station and in court. The aim of the app is to get the best possible result for the individual depending on their personal situation.

As government data shows, a huge number of people continue to face criminal convictions for possessing small quantities of drugs for personal use. In 2016, a staggering 23,000 people in England and Wales were prosecuted for simple drug possession, among which 95 per cent were found guilty.

Due to government cuts to legal aid, most people who are prosecuted for simple drug possession in the UK are required to represent themselves in court – without a lawyer – if they cannot afford to pay for representation. If a person representing themselves fails to put forward relevant mitigation, or fails to accurately demonstrate their financial circumstances, they may face a harsher sentence or financial penalty. Essentially, under current conditions, poorer people may face unfair and disproportionate legal consequences for simple drug possession.

For example, someone found in possession of cannabis for personal use for the first time should receive a cannabis warning. However, someone without legal representation may be unaware of this, and may then accept a caution or conviction for cannabis possession, both of which can have far-reaching consequences - from hindering job applications to disqualifying them from obtaining certain international visas.

These consequences of criminalisation are compounded for people who have other issues besides their drug charge – including people with mental health problems or dependencies on drugs or alcohol – as their ability to represent themselves may be hindered further.

“It goes beyond providing knowledge of legal process and principles, and helps reduce the harms caused by the criminalisation of drug possession. We hope that this tool empowers people to engage with the law in order to ensure that it is applied accurately and fairly, preventing poor decisions.”

Release campaigns for an end to the criminalisation of people for personal drug use and possession, as is currently the legal framework in Portugal. Until the law changes in the UK, this app may prove invaluable for people arrested and prosecuted for the simple possession of drugs.

Whilst the app discusses possible outcomes for possession offences, it encourages individuals to ensure that they instruct a legal representative where legal aid is available, for example, at the police station. Information about the stages where free representation is available, including from a duty solicitor at court, is provided for in the guide and app. Always make sure you obtain legal representation at a police station - it is free and independent of the police.

The free app is available for download on Apple and Android devices. For those without a smartphone, guidance is available in a downloadable PDF. 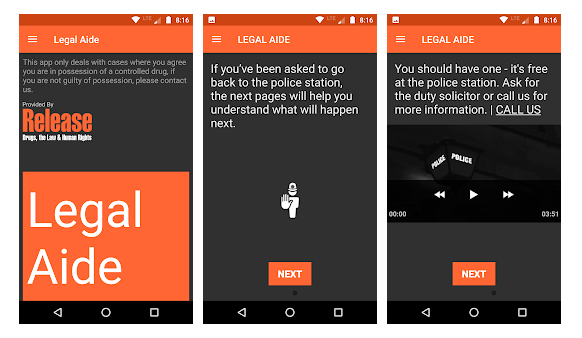