Lesotho has become the first African country to permit the legal cultivation of cannabis – but the production of the drug has been restricted to two foreign-owned companies, while rural farmers and the wider population continue to be prohibited from harvesting their own.

Lesotho is a landlocked country, entirely encircled by South Africa, with a population of a little over two million.

Almost a year ago, on February 28 2017, Lesotho's Ministry of Health and Social Welfare granted a Prohibited Drug Operator license to the Pharmaceutical Development Company (PDC) Ltd to legally cultivate, supply, hold, import, and export cannabis. This made PDC – which is based in Lesotho's capital Maseru - the first company in the country, and the entire of the African continent, to be permitted to legally produce the drug. Yet, just months later, PDC’s director resigned and was replaced by US-based businessman Michael Ogburn, and all of PDC’s shares were transferred to Corix Bioscience Inc., a company based in the US state of Arizona.

On February 6 2018, Corix Bioscience Inc. informed its shareholders that it had had a “tremendous quarter”, including acquiring PDC, which has allowed them to attain “the first license issued by the Government of Lesotho that enables them to import and the [sic] export cannabis and cannabis resin in various forms”.

On its website, Corix Bioscience describes itself as "a leading provider of CBD [cannabidiol] used for a wide variety of medicinal purposes", and it boasts of "manufacturing the best and safest CBD oils in the world". Alongside the manufacture of CBD, the license for cannabis production that Corix Bioscience Inc. has acquired through its acquisition of PDC allows them to undertake a range of cannabis-related activities that are prohibited in most of the world.

According to the terms of the license (available for download here), license-holders are permitted to "cultivate flowerings of the plant [...] for the purpose of smoking, vaporizing, extraction, edible, [...] and medicine production" across up to 20,000 square metres of land. The license-holder is permitted to "export, import and transit [cannabis] within, into and outside of Lesotho for medical use and/or scientific use and any other lawful use". This thereby allows Corix Bioscience Inc. to transport Lesotho-produced cannabis or cannabis-based substances to any jurisdiction in the world that allows the drug for recreational or medical purposes, as long as that jurisdiction permits it. The company claims this to be around 30 countries.

The provision of a cannabis license to PDC/Corix Bioscience Inc., and one to a South African botanical company Verve Dynamics, suggests that Lesotho has taken a ground-breaking step in African drug policy; rolling back prohibition and embracing a regulated approach to cannabis production. However, the reality on the ground is markedly different. 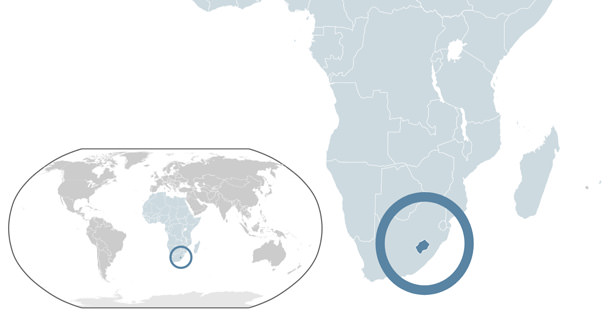 Lesotho is enclaved by South Africa

Cannabis – known as matekoane in Sotho, the main language of Lesotho - remains illegal to harvest, sell, and possess across the country, under Lesotho’s Drugs of Abuse Act 2008. Under section 9 of this Act, being convicted of harvesting a cannabis plant mandates a person to face either a minimum of five years in prison, or a fine of at least M20,000 (£1,192/$1,664). Section 81 of the Act allows any police officer to “without warrant … enter any place on or in which [cannabis is] growing” to destroy said plants.

The deprivation of Lesotho’s people from benefiting from a regulated production of this cash crop is particularly poignant given the country’s high poverty rate (57 per cent of people live below the poverty line), as well as cannabis’ historical significance in the country.

Use of cannabis in Lesotho dates back as far as the 16th Century, and may have had a role in the settlement of the country. Ancestors of the Basotho people - the main ethnic group in Lesotho - may have purchased the territory in exchange for cannabis in around 1550, according to research in a UNESCO report.

Cannabis continues to be a significant part of Lesotho’s agriculture and economy, albeit illegally, today. A 2007 UNODC report claimed that 70 per cent "of the cannabis entering South Africa was grown in Lesotho, where it is estimated to be the third largest source of income".

In a 2009 interview with Spain’s Centre for Rural Studies and Agriculture, a Lesotho cannabis farmer said that cannabis cultivation is widespread, but undertaken covertly. "[Cannabis cultivation] is not something we can do openly. We normally do it in the valleys, which are hidden, and which are inaccessible for the police to get to. We normally do it in ‘no-go-zones’ for the police ... Transportation from the valleys to the market is quite complicated.” If police find someone transporting cannabis, “no matter the size of it, you might get a fine proportional to the amount. Sometimes they might just confiscate what you have,” the farmer described.

While imprisonment for cannabis offences remains rare in Lesotho, people continue to face fines for their involvement with the drug. As recently as December 2017, two men were convicted of possessing cannabis, and only avoided prison after paying fines, the Lesotho Times reports.

Despite the importance of cannabis for Lesotho’s economy, the government has yet to regulate the plant’s cultivation and supply – leaving rural farmers to risk criminalisation and operate in the shadows to make a living. Despite the Lesotho government permitting two foreign companies to legally cultivate and export cannabis, the people of Lesotho still risk penalisation for doing exactly the same thing. When it comes to cannabis law reform, it is yet to be seen if the Lesotho government will take into account the needs of its people.