The production and trade of methamphetamine has surged to record levels in Shan State in recent years, and the broader illicit drug trade now dominates the state, a new report by the International Crisis Group (ICG) has revealed.

Shan State is located in Southeast Asia’s Golden Triangle, a tri-national area which has long-been one of the world’s top opium-producing regions. In recent years, methamphetamine production has boomed here in two forms: crystal meth, and yaba (tablets containing both methamphetamine and caffeine). ICG researchers estimate the total annual value of the region’s drug trade to be over $40 billion.

Meth production in Shan State relies on widespread high-level corruption, and organised criminal groups benefit from easy access to precursor chemicals from neighbouring China. Many local militant groups have reportedly become involved in the drug trade in recent years due to the lack of military or law enforcement presence; following decades of ethnic conflict, most national authorities withdrew forces from Shan State in exchange for a ceasefire, inadvertently providing a cover for illegal activities.

The meth produced in Shan State is believed to be covertly exported to many major regional markets, including New Zealand and Australia, as well as Bangladesh and the Philippines – both of which are now engaging in violent extrajudicial crackdowns on people who use the drug. 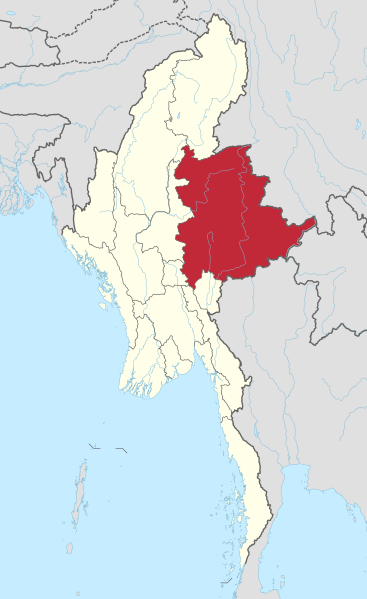 Shan State lies on the Golden Triangle - where the borders of Thailand, Laos, and Myanmar meet (Source: Wikimedia)

Unsurprisingly, the massive industry in Shan State has also led to an increased normalisation of meth use among people living in Myanmar.

Yaba use is now prevalent among broad sections of society; "some opium farmers in Shan state are said to receive half their pay in [yaba] pills [while] jade-miners are reportedly given the drug to help them work 20-hour days," The Economist recently reported. Despite this widespread prevalence, personal possession of the drug remains criminalised, and authorities are failing to provide effective harm reduction measures to reduce meth-related harms.

In July 2018, President U Win Myint announced the creation of a new taskforce to tackle the burgeoning trade, but observers warned that it may lead to a crackdown on people who use drugs - rather than large-scale traffickers.

“The devil is in the details and this will need to be clarified, because if it is used inappropriately to harass drug users, it would appear to contradict the national drug policy, which talks about diversion to treatment,” the UN Office on Drugs and Crime’s regional representative Jeremy Douglas said at the time.

The ICG has similarly warned the government against focusing enforcement efforts on people who use meth: “The government should redouble its drug control and anti-corruption efforts, focusing on major players in the drug trade. Education and harm reduction should replace criminal penalties for low level offenders.”

Reports from government officials suggest that the country is doing the opposite. Authorities estimate that 70 per cent of current inmates are incarcerated for drug offences, but few major trafficking figures or groups are being prosecuted.

It appears that the illicit meth trade will continue to grow unabated unless coordinated national efforts are made to counter the deeply-rooted corruption that fuels it.