The Philippines government has claimed that the country’s drug war protects innocent citizens, despite President Duterte admitting the state’s role in extrajudicial killings.

On December 10, Human Rights Day, the Philippines' Office of the President published a statement asserting that President Rodrigo Duterte is working to "further human rights". The one-page document claimed that the government’s "crusade against criminality, corruption, terrorism, insurgency, and the proliferation of illegal drugs" was being conducted to "protect the lives of the innocent law-abiding citizens of the country". It also noted that "in all these [activities], the rule of law is upheld as the guilty are brought before the bar of justice".

The statement directly contradicts remarks previously made by President Duterte. The leader has openly called for the murder of people who use drugs since before his election, and recently insisted that his “only sin [in his leadership of the country] is the extrajudicial killings”.

According to an estimate by Human Rights Watch, over 12,000 men, women, and children were killed – without trial or conviction – between June 2016 and January 2018. The death toll has undoubtedly risen over the past year, although the precise figure is unknown.

In many instances of people being killed, there was no evidence of the victims’ involvement with drugs – whether in terms of use, sale, or production. 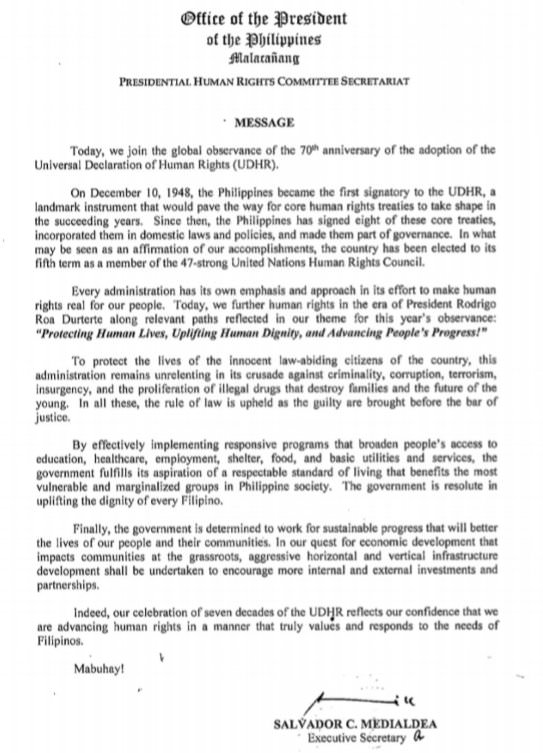 The Office of the President's full statement (click to enlarge)

Karapatan, a Filipino human rights organisation, cited the drug war slaughter as one of several ways that "the Duterte regime is shoving repression down our throats".

“The Duterte regime is a government that wilfully violates people’s rights; it is not a government for the people. It has merely strengthened a system that only affords due process, justice, and privileges to the elite, leaving the rest of us as targets of rights abuses and spiralling poverty,” said Karapatan’s secretary general, Cristina Palabay.

Indeed, Duterte’s drug war has been widely criticised for targeting the poor. As TalkingDrugs has reported, authorities have undertaken coerced door-to-door drug testing in slums and poor neighbourhoods. Supreme Court Senior Associate Justice Antonio Carpio condemned the approach for being "concentrated on going after the small-time peddlers [rather than] the big-time drug lords”.

Earlier this year, President Duterte’s own son – Paolo – was cleared of involvement in the attempted importation of 602kg of methamphetamine into the Philippines following a trial. Elites, it seems, are afforded the right to a trial within the rule of law; the rich are innocent unless proven guilty, while the poor regularly face death for mere allegations.

The Prosecutor of the International Criminal Court has opened preliminary examinations into crimes committed during Duterte's drug war, but - for now - the slaughter shows no signs of stopping.