When I heard someone knocking on my hotel room’s door and shouting “She is dying!!!” I was in the bathroom. Just five minutes ago, I entered my room, took my coat and shoes off and… ran out straight away with Naloxone.

After that memorable meeting in Scotland, I carry it with me all the time.

Glasgow. July 2018. My 45th birthday. “You know, we have a very serious problem with overdoses” – those were almost the first words I heard from Stephen Malloy, part of the team of the European Network of People Who Use Drugs. I nodded and a routine thought came across my mind: “Back at home, in Vilnius, up to 12 people are found dead in bad months. Under the guise of heroin, people are sold a mix of morphine and methadone together with fentanyl.”

Looking at me attentively, Stephen went on: “My country has done very well with offering OST (methadone, buprenorphine) but everyone knows more MUST be done. People need easy access and doses that are suitable to them. There will be a small ‘Heroin Assisted Treatment’ program beginning in September 2019. And in time, if it is allowed to grow, it will change so many lives for the better; IT WILL SAVE LIVES.” 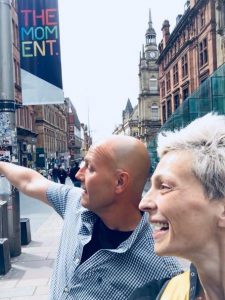 “So here it is,” Stephen was holding an oblong narrow yellow box in his hand. “Are you ready to take it with you?” I recognized it: once I saw such a box at a conference. It was convenient and stylish, with Naloxone inside. I said “Sure!” and took the box. “Then put this bracelet on. People will know that you have naloxone with you, if you overdose and they find you. They will be able to help you and you will be able to help others.” Stephen watched me carefully, assessing my decision: was I really ready?

I put the bracelet on, found a place for the Naloxone box in my belt bag, where I already had my wallet, my phone and my beads. Then I continued my three-day work-load at the meetings on overdose response.

One of the meetings was dedicated to the topic of the 48 hour window after release from prison. There was a discussion with the experts in overdose theory on what should be done first: Naloxone injection and then artificial respiration or first artificial respiration and then Naloxone? My logic told me that first Naloxone is to be injected, which will help to ensure artificial respiration. “That’s a question of life, so it needs a correct answer. When I go to Ukraine, I will have to go and visit Vasiliy, he is an emergency doctor in the city of Dnepr. He saved my life more than once, so I trust him. He will tell what is to be done. He will also teach me how to do it,” I was thinking, packing my things to go to the EHRA headquarters in Vilnius.

Railway station. Stephen and Nicole’s birthday present – a Scottish red and green checked scarf – kept me warm. Standing at the platform, we gave each other goodbye hugs, listening to our heartbeats.  Making myself comfortable in my seat with a book, I realized that my eyes were constantly coming back to the yellow bracelet.  The sounds of the train, its rhythmic swing combined with polite and quiet travel companions – it all gave me a chance to think about why it happened like this. I had 30 years of opioid use behind me, but Naloxone became part of the things I always consciously carry with me only three days ago.

Why? With the daily use of opiates, which were cooked correctly using high-quality materials, overdoses were rare in our group. Usually they happened after the forced “treatments.” Since about 2005, if you hear someone had an overdose in Dnepr (Ukraine), the response would be: “He was lucky to survive.” Naloxone ampules were available in mobile clinics and from outreach workers since 2003. However, it was the first time in my life that I wore a bracelet saying “I have Naloxone.” We always tried to avoid carrying Naloxone ampules with us so that the police would not start working on us because of it: “Hey, Naloxone, so you’re a drug addict!” Then the standard scenario would follow: taking a bribe and letting us go for a while. Another scenario could be turning the life of the person and the family upside down, if they needed to show a better “crime detection rate.” Quietly and invisibly, the bracelet started raising my level of consciousness about overdoses.  It became a part of me. I only take it off when I have my aikido practice. The rest of the time, I have the bracelet on my arm, which means I have Naloxone in my bag and my bag – on my belt.

The approach to have Naloxone “always at hand” helped me to save a person’s life at the hotel. I covered three floors – and 40 seconds after I heard someone knocking on my door, Naloxone was already doing its work in the body and helped us to keep our dear friend alive. We did artificial respiration, poured water, and our team of two people + naloxone helped to save our friend’s life. We prayed for Stephen and Nicole. I realized that I do not have practical reanimation skills, which work automatically. At the same time, wearing a bracelet saying “I have Naloxone” means that I have to be 100% sure about the things I am doing. So I still had the question: what should come first – Naloxone or artificial respiration? My trip to Dnepr was not coming soon, but the question was vital. So we invited a practitioner, an emergency care doctor to come to the EHRA office, to share his experience and tell us what to do.

“After death, pinned pupils are seen only in people who died of opiate overdose. Sometimes it can also be an effect of cerebral hemorrhage, but in this case one pupil is constricted and the other is not,” an emergency care doctor from Vilnius told us. That is how easy it is to collect data and see how many people actually die of opiate overdose, who those people and their family members are and what can be done.

These are the things to be done:

First, 70% of people die as they are not able to breathe. When a person is unconscious, his tongue base goes down and closes the air passages.  What to do: put your hand on the person’s forehead, throw the head a little back and put the jaw down. Often you will hear a deep breath.  There are three ways to determine if the person is breathing: eye, ear next to the person’s mouth and watching the person’s chest. With your eye, you will always feel the air moving, with your ears you will hear it and the chest will help you to see it. A person makes 14-16 breaths per minute. So we wait for 10-15 seconds to see if we can hear or feel the person breathing or see the chest moving.

Second, we must fill the lungs with oxygen. “While an amputated limb or finger can be stitched back to the body even after three hours, a brain cell left without oxygen for four minutes, dies and this process is irreversible.” We breathe in 21% of oxygen, breathe out – 17%. So that’s what we need to do straight away: hold the nose and carefully breathe the air into the person’s lungs twice. This air will be enough to save the brain so that we have four minutes to inject Naloxone and ensure artificial respiration.

Fourth, artificial respiration: we press the chest 30 times and let go, going 4-6 centimeters deep, while breathing. You can watch the practical learning session by the emergency care doctor (Rus).

…Summer 2019. “Thank you, Stephen. Girls from the Narcofeminist movement and your Naloxone saved my friend’s life. As for the bracelet, it is a magic one. It helped me realize that I need to develop my skills to help people in different overdose scenarios.” When we met at the Harm Reduction International conference in Porto, we hugged each other tightly, not letting go for a while.

Besides, I realized that consciousness means personal responsibility and action. People in EECA countries cannot carry Naloxone safely as they may have problems with police. Considering this, talented Sergey Bessonov and Dima Shvets came up with a way of how to make boxes and Naloxone packs, which are convenient to keep in a glove compartment in a car or at home. There is even an “excise label” to store the box until there is an emergency. They make those boxes for people, with love and understanding. They are stylish, nicely sized and pleasant to hold. Such boxes are made in the social dormitory of Ranar Charitable Foundation in Kyrgyzstan. 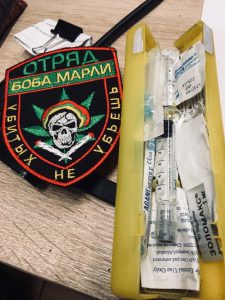 The yellow box, which came to me from Scotland, has already renewed its stock of Naloxone and now has other helpful things as well. The last thing I got from a friend of mine were tablets, which help in case of MDMA overdose.  In the centre, there is a syringe with Naloxone.

“90% of successful reanimations are the ones when someone did something,” says the emergency care doctor. If someone needs help, I am ready.

This article was originally published by the Eurasian Harm Reduction Association. You can read it here.

*Olga is an expert in community mobilization and advocacy in the CEECA and works as the Advocacy Manager of EHRA. She holds a Master of Medical Psychology and in 2001 organized an underground needle exchange center in Dnepr, Ukraine. For the past 10 years, Olga has been engaged in research into the needs of subgroups of communities of people who use drugs with the subsequent introduction of services to reduce harm from inadequate information on psychoactive substances, and the effects of repressive drug policy, as well as the possible negative consequences of substance abuse. In 2010, she was one of the founders of the first Association of Substitution Treatment Advocates (ASTAU) in the CEECA region. Currently, Olga is engaged in issues of drug policy in strengthening the capacity of civil society to influence political decisions at the national, regional and international levels. In 2017, Olga was elected to the Board of Directors of Harm Reduction International.