The Uncovered Truth: How the opium poppy cultivation in Kyrgyzstan ended Collection of medicinal poppy in the collective farm "Issyk-Kul" of the Djety-Oguz region, 1963. Source: Sputnik

TalkingDrugs is excited to present to its readers an extract from Sputnik.kg on the origins of opium cultivation in Kyrgyzstan. This is a great insight into the establishment of a global opium producer, and the impact that drug trafficking had on the industry.

The first opium poppy fields appeared in Kyrgyzstan well before the Soviets were there. Some sources state that it came to the region in the 1870s from China. The opium poppy used to be cultivated in the valley around the lake Issyk-Kul, where the climate was the most favourable for growing the plant.

Tsars and later Soviet authorities had a state monopoly on opium production. Both faced smuggling and contraband of its production, and as a result had to shrink the opium poppy fields, banning cultivation in the areas close to the Chinese border and further introducing criminal penalties for self-growing farmers.

The region of Issyk-Kul quickly became the epicentre of production of this valuable medical material not only in Kyrgyzstan, but in the whole of the USSR. 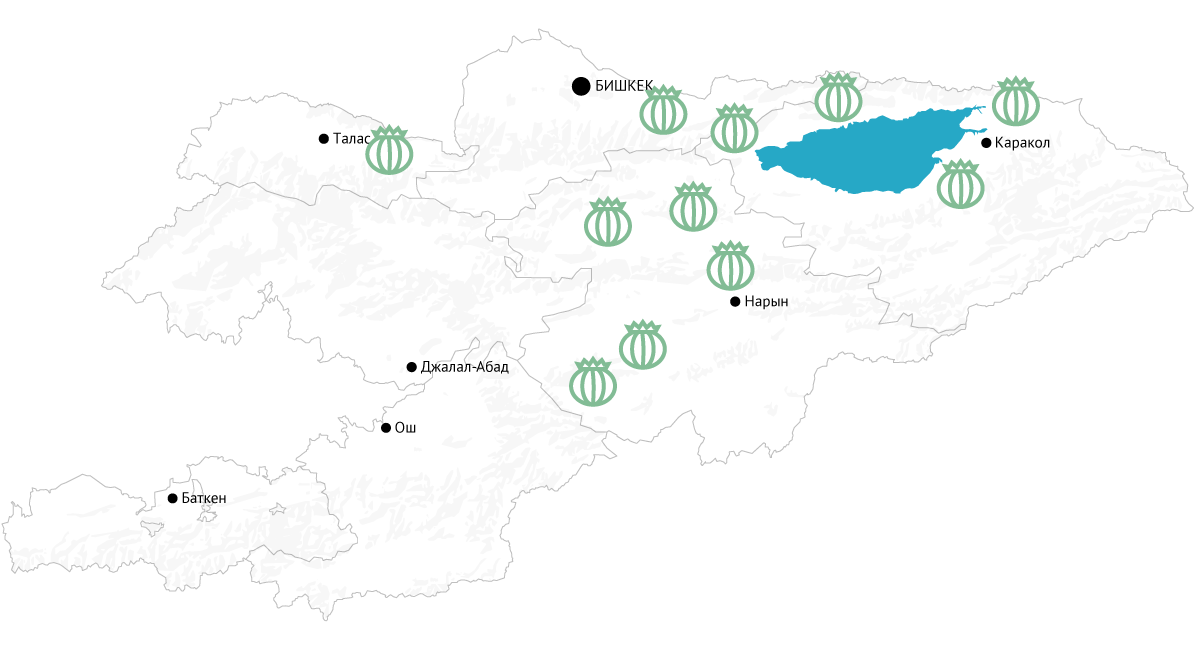 The location of poppy plantations across Kyrgyzstan. There was a concentration of cultivation fields around Issyk-Kul lake in the northeast of the country. Issyk-Kul is the second-largest saline lake after the Caspian Sea. Source: Sputnik

During the Second World War, the demand for painkillers grew dramatically, and Kyrgyzstan had to increase the amounts of opium produced to fulfil the army’s needs. Not only was it harvested, but it had to be protected from stealing: every plantation was surveilled by 24/7 armed guards; policemen accompanied all shipment of raw opium to the pharmaceutical factories.
Over the next two decades after the WW2, the opium production industry grew and developed: planted opium poppies were cultivated in more than 80 collective farms (kolkhoz), with the best lands provided to grow them. Local newspapers frequently boasted the achievements of the poppy farmers.

According to the archives of Kyrgyzstan’s Ministry of Interior, in 1966 the Republic produced 241,337 kg of raw opium, which grew on 6,772 hectares of land.

The state encouraged the farmers’ efforts, awarding the best poppy cultivators with medals and an appreciated state purchase price, higher than for other agricultural crops.

Turdakun Usubaliev, first Secretary of the The Communist Party of Kyrgyz Soviet Socialist Republic (SSR)  from 1961-1985 recollects that Kyrgyzstan at that time put all its efforts into poppy plantations, which led even to the decline of the cultivation of other agricultural plants.

“Around 50 thousand people have been engaged in mass harvesting of the opium poppy plants. No other crop required so much manual work. They only used seeders to plant the seeds, but all the processes were purely manual. I know this very well, because as a schoolboy I used to participate in growing and harvesting of opium.”

Quote from Turdakun Usubaliev's book “One has to know the past, not to make mistakes in future”

Omurbek Asanov, an 83-year-old man from the Djety-Oguz region also remembers this painstaking and laborious process. They used to work on opium plantations since their early childhood.

“Each family received a plot they had to take care of at every stage – from planting to harvesting. The police would oversee the workers from the special towers. But the most cunning still managed to take away opium from the plantations, for instance, by tying opium to cats or other animals. Some peasants grew rich on the stolen opium”.

While thousands of people have been working hard on the plantations, scientists did their best to come up with the best selection of poppy breeds, to extract more opium for the pharmaceutical needs. And it worked quite well.

According to some official sources, by the beginning of the 70s, the small Republic of Kyrgyzstan made up 16% of the world legal opium trade. It seemed like a gold mine for the country.

But things turned out differently. 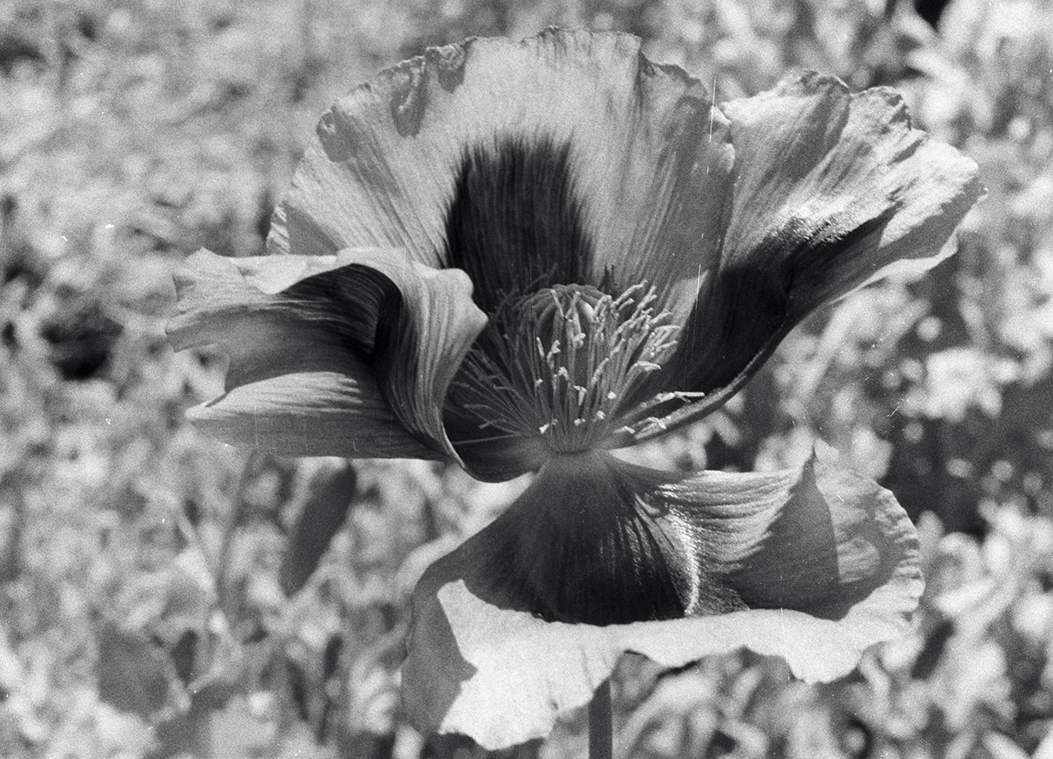 Despite the great efforts of the local authorities and law enforcement, organised crime and drug dealers grew stronger and stronger. In the late 1960s, local drug trafficking was taken over by organised gangs. Kyrgyzstan became a harbour for the criminal elements from the whole USSR: in the summer, all sorts of profiteers moved into the Issyk-Kul region. In six years (1962-1967) 120 people from other Soviet Republics, who came to Kyrgyzstan specifically for opium smuggling, had been arrested.

The scheme was very simple: the criminals attracted the poppy collectors by huge advance payments, with special traffickers shipping opium to “selling spots” for drug users. Opium became a kind of currency - it was exchanged for weapons, gold, food and clothing.

Although the government paid collective farms 11 roubles for 1 kg of opium, on the black market it could be sold for 300 to 600 roubles.

The opium plantations were guarded so heavily, that one would never imagine it is possible to steal even a gram of opium from the field.  Local police were strengthened by law enforcement troops from other Soviet republics.

To steal the opium from the plantations, poppy collectors used all possible means: women hid the crops in their hair, beneath their clothes and in their underwear. Sometimes even in the nappies of new-borns. Some people also used children for this purpose as well. However, most commonly opium was hidden in glass jars and buried in fields. 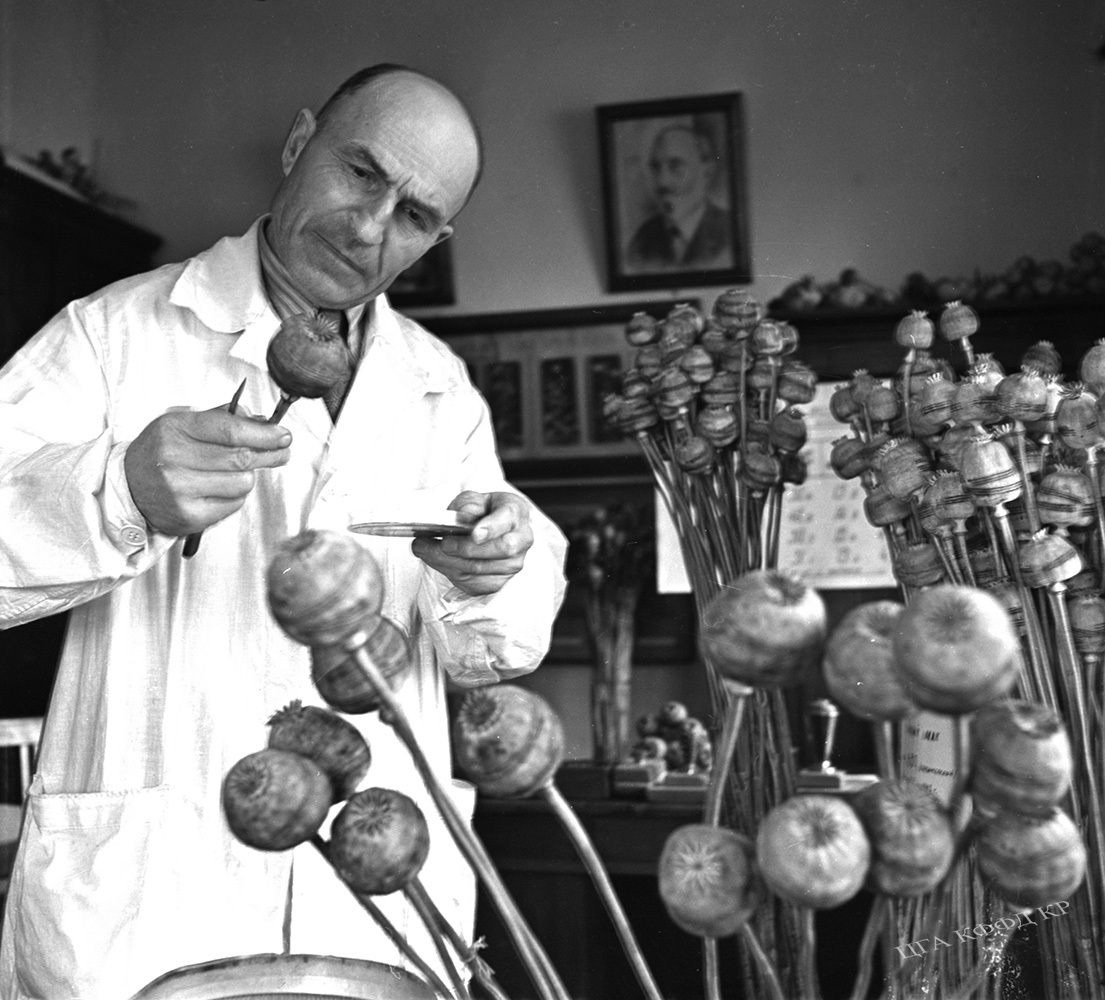 Karpek Kurmanov, a lawyer, mentioned in his book “Confession of a Lawyer” that the Criminal Code of Kyrgyz SSR contained eight offences on a range of illegal drug circulation activities (from smuggling to illegal personal cultivation), which dealt harsh penalties - from 15 to 20 years in prison.  For comparison, criminal codes of other Soviet republics would typically only have two drug-related offences.

According to the official statistics of the Ministry of Interior of Kyrgyzstan, and as Kurmanov states in his book, every year police used to confiscate over 200 kilograms of raw opium from the locals. But it was only a tenth of what was illegally exported outside the republic.

Nevertheless, bosses of the drug dealing criminal groups were rarely prosecuted, because they never got personally involved in the “dirty” business of drug trafficking and selling. While the bosses only managed processes and received benefits, ordinary people were put in prisons.
Opium, stolen from the Kyrgyz plantations, has been transported all over the USSR and abroad, even to Iran.

Turdakun Usubaliev, who was a leader of the Kyrgyz Republic at that time, has reported to the central Soviet authorities about the situation and proposed to ban opium poppy production. Enforcement and control at that time did not help prevent smuggling: new criminal groups came every day and the number of drug related crimes skyrocketed.

In 1973, Usubaliev demanded a personal meeting with Aleksey Kosygin, head of the Council of Ministers of the USSR. This is how he remembers this episode in his book:

"Once again I proposed to ban opium cultivation in Kyrgyzstan. Many times, I have been visiting Aleksey Kosygin and talking to him on the phone, so I believed he was a man of his word. Previously, while discussing other issues related to the development of Kyrgyzstan, he never promised at once to solve all the problems. But when he did – he would always fulfil his words. I was so excited to hear from him: “We will once again discuss this issue and will make a decision. The situation with drug abuse in Kyrgyzstan cannot be neglected”.  So I left his office convinced that the situation will be solved".

In 1974, Soviet authorities adopted a decree to ban all cultivation and production of the opium poppy in the Republic of Kyrgyzstan. Ministries were requested to develop an alternative to opium, which would have similar effectiveness, but could cause less harm for the society.

This story was originally written Mirbek Sakenov and Karina Rozetdinova; they are journalists at Sputnik.kg. Many thanks for facilitating the translation and republishing the story. You can follow Sputnik Kyrgyzstan on Facebook and Twitter.

* This article has kindly been translated by Anastasia Bezverkha