“Your leaves of green, your purples and blue/ Has cured little kids, and old women too/ And I say to myself, what a wonderful herb!” (Damian and Stephen Marley, ‘Medication’). According to the Brazilian government, there is no such thing as medical cannabis, despite all the evidence presented in the medical literature. Source: Wikimedia Commons/Author: Tomaz Silva.

The Bolsonaro administration’s hatred and contempt for science are not new, nor is its authoritarian stance against cannabis and other banned substances. One year ago, a special commission of Brazil’s lower house of Congress approved a bill that seeks to regulate the cultivation of medical cannabis and industrial hemp. The bill had been shelved for six years, and it was promptly shelved again after being voted without following to the Senate.

On the 22nd of June, more than one year after the second shelving of the bill, the Brazilian government issued a third booklet about the legalisation of cannabis filled with inaccuracies and anti-cannabis propaganda. The biased, evidenceless, and fear-mongering content of the booklet resembled the rhetoric of British Home Secretary Priti Patel. Much like the white paper recently issued by the Home Office, which outlines the UK’s new “tough” approach to drugs, Brazil’s booklet would be shortlisted in a D.A.R.E. essay contest. It comes with all the elements that one would expect from Bolsonaro’s ministries: moral panic, misinformation, and “evidence” cherry-picking serving for confirmation bias.

Cannabis patients’ organisations have reacted strongly to this attack on their rights, demanding that the government remove the document from its website. APEPI’s (Support for Cannabis Patients and Research) chairperson, the lawyer Margarete Brito, put together a petition that has already gathered over 12,000 signatures, accusing the document of spreading misinformation and ignoring scientific evidence. If the petition reaches 50,000 signatures, it will be forwarded to the Federal Government. 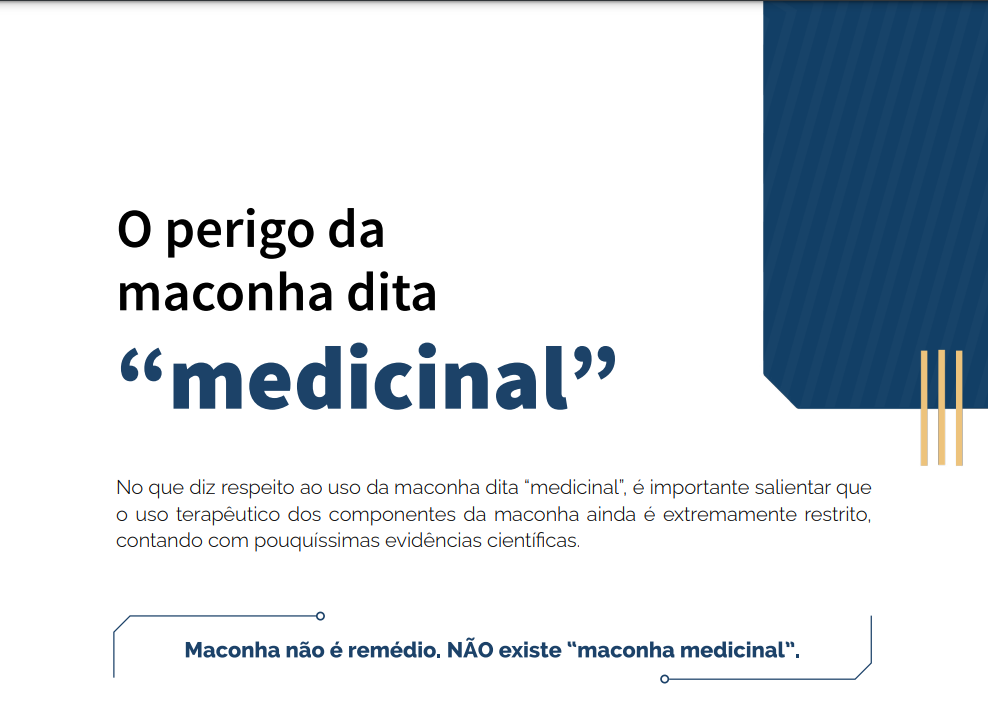 From inside the document: “The dangers of the so-called ‘medical’ marijuana”, reads the title. On the bottom, the sentence reads: “Marijuana is not a medicine. ‘Medical marijuana’ DOES NOT exist.” Original document here.

The authors of the anti-legalisation booklet claim that:

“Recently, the therapeutic use of marijuana has once again been a topic of discussion in Brazil, based on low-quality scientific information and, above all, on the financial interests of certain groups that intend to establish the marijuana business in the country. Furthermore, these movements have the support of ideological groups, which have the legalisation of drugs as their irresponsible political platform. In the scientific area, with the exception of the very restricted use of the substance cannabidiol (CBD), there are still no consistent studies that prove the efficacy and safety of other products derived from marijuana for clinical use.”

One wonders what they understand as “low-quality” scientific information. The literature on medical cannabis is vast and dates as far back as the mid-19th century in the Western world; taking into consideration non-Western medicine, this literature is millennia old. Let us just stick with Western medicine, though, and what is publicly available online. There are  29,162 articles available on PubMed regarding the scientific study of marijuana, the oldest one dated 1840.  Of course, some of these studies build cases against medical cannabis, but most of them, especially the most recent ones, assert the benefits of cannabis for a large number of conditions.

And with regards to financial interests, who are the groups that would be interested in establishing a “marijuana business” in Brazil? In the current policy scenario, it is in fact big Pharma that is making huge profits from the cannabis industry, driving up costs and making it a treatment that is inaccessible to the majority of the population. Wouldn’t the regulation of the national cannabis industry, therefore, be of interest to patients who would have access to more affordable life-restoring medicine?

To underscore one example of cherry-picking evidence and misrepresentation among many in the booklet, consider one of the main justifications for the publication of this document, namely, what the authors understand as the concern of the International Narcotics Control Board (INCB) with the “alleged medical use of marijuana and related substances.” The statement is followed by a citation of the Board’s 2018 report. If one bothers to check the quoted source, however, it reveals that the Board was concerned with what they understood as poorly implemented medicinal cannabis programmes in the United States, and not with questioning the therapeutic properties of cannabis.

In the attempt to build the facade of a scientific, evidence-based approach, the authors claim that there is very little scientific evidence of the therapeutic use of cannabinoids beyond CBD. They quote a resolution by the Federal Medical Council (CFM), the same medical council that wrongly endorsed the use of hydroxychloroquine to treat COVID-19, a theory which has been widely debunked. The document from 2014 simultaneously approves the therapeutic use of CBD for children and adolescents who suffer from epilepsy while still claiming that there was not enough scientific research to prove the safety and efficacy of the substance for treating epilepsy patients. For the booklet’s authors, though, this statement is extrapolated to claim that the CFM asserted that there are too few studies that prove the general therapeutic efficacy of cannabis.

Last year, Dr Carolina Nocetti, a pioneer of cannabis therapy in Brazil, told TalkingDrugs that there is a long literature on the benefits of cannabis for a whole range of illnesses and that it is every physician’s duty to get acquainted with it. There are thousands of studies that are publicly available on the medical use of CBD, and more than 400 alone on the use of CBD to treat epilepsy. It is also interesting that the INCB’s report that the booklet’s authors cited to start building their case against medical cannabis does not question the therapeutic properties of the herb. Yes, it acknowledges and describes the potential negative effects of short and long-term use of medical cannabis, including the so-called “dependence”, but it also lists cannabis’ benefits for a range of illnesses and their symptoms.

This latest authoritarian attack on the human right to access a medicine that can restore and even save lives is just a sample of what Brazilian citizens can expect in terms of drug policy if Bolsonaro wins the October 2022 presidential election and continues for a second term. In a recent event, his current Minister of Health, Marcelo Queiroga, spoke clearly about the government’s stance on drugs and people who advocate for legalisation. He could not resist a Nazi-inspired metaphor, and compared people who advocate for the legalisation of drugs with disgusting animals, and proceeded to suggest they are killed. “We are against drug use, although there are people who are advocating it: drug liberalisation. For these worms, nitazoxanide. Maybe it will kill these people,” he said. Charming, isn’t it?

The recent developments once again remind us that if we want an evidence-based drug policy in Brazil that centres on harm reduction, we cannot simply hope for the better and that, unfortunately, at this moment, under this government, we cannot trust the institutions. It will take collective action and ballots. We have to vote for change.