Emerging pharmaceutical companies are promising revolutionary treatments for substance misuse based on the brain disease model of addiction (BDMA), in contrast to the historical criminalisation approach of the War on Drugs.

Awakn Life Sciences has announced last month the opening of a second clinic in London, following the launch of its first clinic in Bristol in March 2021. The biotechnology company states that “mental health and addiction are the fifth leading cause of illness globally, affecting 20% of the population”, and claims that psychedelic-assisted psychotherapy can radically transform existing treatments, providing a long-lasting curative outcome for patients, in contrast to the maintenance approach of traditional psychiatry.

The novel treatment comes from extensive research on the therapeutic use of psychedelic drugs for depression, anxiety, post-traumatic stress-disorder (PTSD) and substance use. The UK clinics will offer a nine-week course which includes 11 psychotherapy sessions, four of which involve the administration of ketamine, for a total cost of £6,000.

Awakn isn’t the only clinic administrating psychedelic medicine to treat addiction. For example, MindMed offers treatment for addiction based on a synthetised version of Ibogaine, stating on its website that addiction is a brain disease, “driven by a set of disease processes including the dysregulation of dopamine, a potent neurotransmitter, in the brain’s reward/pleasure centre located in the midbrain”.

Many of these emerging companies are founded on the belief that addiction is a chronic relapsing neurological condition. Proponents of the model argue that, through this approach, addiction is no longer seen as a moral failing that needs to be punished, but rather as a condition that needs to be treated with effective medications and addressed through adequate public health interventions.

Although the BDMA might reduce stigma and blame by offering biogenetic explanations of behaviours, it may also increase discrimination based on its definition of disease. In fact, a study has shown that medicalisation - making certain aspects of human behaviour a medical matter (as coined by Irving Zola in 1972) - can increase prognostic pessimism, impede the recovery process and reinforce the stereotype that people who depend on drugs are dangerous.

As Dr Tehseen Noorani has argued, medicalisation can also hinder decriminalisation efforts. By turning certain drugs (in this case, ketamine) into medicines, the model can also reinforce the idea that there is a “proper” use of these drugs – that is, only for therapeutic purposes and applied exclusively in highly controlled clinical contexts, with the implication that recreational and independent consumption is unsafe and irresponsible, and therefore unlawful and punishable. There is a fear that this phenomenon would lead to some level of what Nick Powers described as ‘medical elitism’, where making previously illegal drugs only available as expensive medicine would make it difficult (if not impossible) to access for the majority of people. This in turn limits people’s right to consumption without criminalisation and benefit from these drugs outside of a clinical setting.

This attitude also fuels “psychedelic exceptionalism”, the narrative that psychedelics “are not like other drugs” and are perceived differently from other substances because they are seen as “tools” associated with productivity, healing, mystical experiences, particularly for a predominantly White, Western, middle-class group of users. On the other hand, individuals and communities who consume ketamine, cocaine, cannabis, and heroin – especially poor and BIPOC – in non-clinical contexts continue to be punished, stigmatised, and marginalised as a result of – a very hypocritical – War on Drugs. Would medicalisation benefit them too? 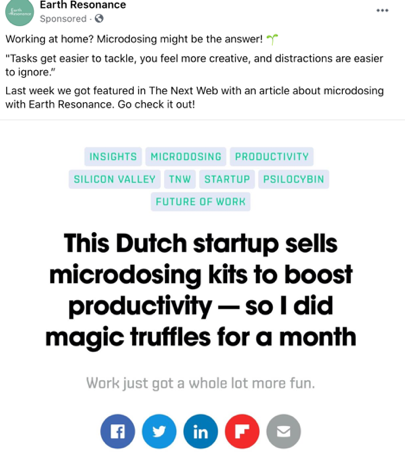 A screenshot of a sponsored ad on Facebook by start-up Earth Resonance promoting microdosing for productivity. Author's image.

In episode 25 of the podcast series “Crackdown”, Garth - host and former opioid user from Vancouver, BC– engages in a captivating conversation with historian of Science Nancy Campbell on the development of the BDMA. The episode unveils the controversial history of the model of addiction through the analysis of the film “The Narcotic Farm”, which documents the establishment of the first prison / hospital in Lexington, United States, where people with substance use issues were sent to rehabilitate, while also being used as guinea pigs to research the physiological causes of addiction.

Nancy and Garth believe that this approach only fuelled the idea that people who use drugs need to be fixed and treated, arguing that such reductionist approaches do not take into account wider social and structural factors like racism and poverty. Furthermore, the medical model takes agency away from people who use drugs and place the power in the hands of doctors and psychiatrists.

“I don’t think that science is really going to come to terms with the kinds of political, economic, social structures and conditions, and in particular with the kind of structural violence that people are subjected to”, claims Nancy.

Addiction is a complex issue. There is no simple fix. Medicalisation, despite its good intentions, could lead to further health inequalities, limited access to safe supply and increased stigma towards “bad users”. Focusing on health and individual behaviour might distract us from doing the work at a structural, collective level.