A newly-published report has shed light on the murky world of online drug sales in Europe, including the large role of UK-based drug vendors – especially those selling new psychoactive substances (NPS).

The report, Drugs and the darknet: perspectives for enforcement, research and policy, was published on November 28 by the European Monitoring Centre for Drugs and Drug Addiction (EMCDDA). The document shares the results of analyses of estimated sales and revenue data from 2011 to 2017 associated with darknet drug sales in 30 countries: the 28 EU member states, Norway, and Turkey.

The studies found that Germany, the UK, and the Netherlands are – by far – the largest sources of illegal drug sales online in Europe. Between 2011 and 2015, darknet drug vendors in the three countries earned a total revenue of €26.6million, €20.3million, and €17.9million respectively – together accounting for more revenue than that of the remaining 27 countries combined. Vendors in the country with the fourth highest revenue during this period, Belgium, acquired less than €5million during the same period.

A breakdown of sales revenue from these three countries showed that the vast majority of vendors’ income came from the sale of cannabis, cocaine, and non-cocaine stimulants (such as MDMA). 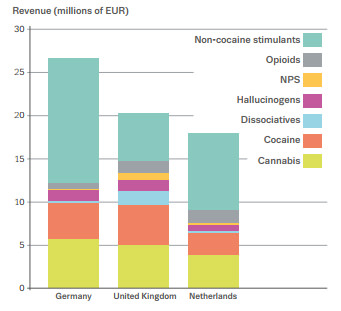 Additionally, in the UK, around a quarter of sales revenue came from hallucinogens, dissociatives (such as ketamine), opioids, and NPS. Data shows how UK vendors’ are far outstripping any other European country in the sale of NPS, despite NPS representing “only a very small proportion of all trade on online anonymous marketplaces”. Additionally, despite the introduction of the UK’s Psychoactive Substances Act 2016 – which was intended to prohibit the production and sale of NPS – the country was continuing to lead Europe in darknet NPS revenue as recently as early 2017, according to data the ECMDDA gleaned from AlphaBay, one of the largest darknet markets at the time.

As of July 2017, AlphaBay was estimated to have facilitated the exchange of over $1billion through digital currencies – primarily through drug sales - for at least 200,000 users and 40,000 vendors in a two-year period. Despite the website being shut down by the FBI, it seems unlikely that there will be a significant effect on online drug sales; although law enforcement are able to “disrupt darknet markets … the overall ecosystem [of darknet drug markets] appears to be fairly resilient with new markets quickly becoming established”, the EMCDDA described.

As TalkingDrugs has previously reported, investing vast quantities of money and law enforcement hours into shutting down darknet drug markets is unlikely to reduce the harms of drug use, and may even increase the revenue of vendors. An April 2017 study suggested that the mass coverage of the Silk Road darknet website's closure, and the arrest and imprisonment of its founder, led to an increase in the value of daily international drug market sales from $100,000 to $250,000 in only two weeks.

The EMCDDA's report recommends that international multi-agency authorities should target darknet marketplaces, as well as "high-level" vendors and suppliers, as "a small number of vendors appear to be responsible for a disproportionately large volume of overall sales". It remains to be seen whether law enforcement will have any more luck suppressing the digital drug trade than they do with real-world drug transactions.

Read the full report: Drugs and the darknet: perspectives for enforcement, research and policy