Sri Lanka’s plans to militarise drug policy and execute people for drug offences are part of a misguided attempt to stem trafficking that may increase drug prohibition’s harms for the wider population.

This week, Sri Lanka announced that it will begin hanging people for certain drug offences. Simultaneously, the president drafted a Special Provision Act to grant police powers to the military, so that soldiers can assist in domestic drug law enforcement. This sudden escalation of the drug war is a response to an unprecedented rise in heroin and cocaine seizures in the country since 2016, sparking fears that Sri Lanka has become a major transit hub in global trafficking routes.

Instead of carefully devising thoughtful policies to counter corruption and monitor trade, authorities are panicking – responding with a draconian, reactionary, and unjustifiable approach. There is no evidence that the death penalty deters drug trafficking, but there is considerable precedent of drug war militarisation causing immense harm to the wider civilian population.

The presidential spokesperson said that Sri Lanka’s intended execution of people for drug offences would “replicate the success” of the Philippines drug war.

An estimated 12,000 people have been killed, mostly shot to death in the street, since President Rodrigo Duterte came to power in July 2016. Some of these people were killed because they allegedly sold drugs, some were killed because they allegedly used drugs, and many were killed for entirely unrelated reasons – but were posthumously alleged to have had some involvement with drugs. The dead include children as young as six. None of these people were granted a trial prior to their execution.

An estimated 12,000 people have been killed in President Duterte's drug war in the Philippines

As a Filipino human rights advocate said one year after his country’s brutal drug war began, the drug war “has made human life cheap, and it […] has endangered everybody in the Philippines. Duterte has rolled back the gains in freedom and democracy won by the Filipino people over the last 30 years”.

As Sri Lanka continues to develop into a free and healthy democracy, the government’s plans could pose a major setback to progress and the rule of law. Is the Philippines drug war truly a policy that Sri Lanka would like to emulate?

Calling on the military to suppress the drug trade, as Sri Lanka’s president has done, is a dangerous move that puts innocent people in harm’s way. The clearest example of this approach’s failure is Mexico, which introduced a militarised war against drug trafficking in December 2006. Almost immediately, the country’s homicide rate skyrocketed; an estimated 200,000 people have been killed since then. 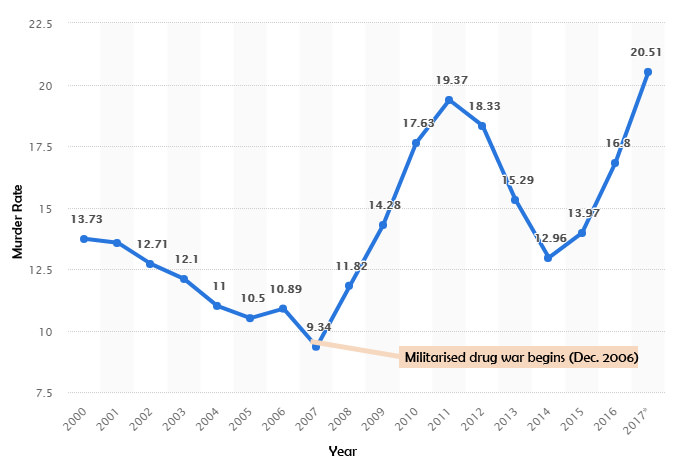 These murders - alongside other egregious human rights abuses including kidnapping, torture, and human trafficking – are a result of the intensification of the drug war that was brought about by militarisation. Soldiers fight in wars; by introducing soldiers to drug law enforcement, the Sri Lankan government are instigating a domestic war that will undoubtedly lead to increased violence. As in Mexico, innocent people will get caught in the crossfire, trust in government institutions will fall, and the state as a whole will become weaker. And, of course, drug trafficking continues to take place in Mexico as strongly as ever; Sri Lankan leaders should learn from these mistakes.

Mexico’s new president, Andrés Manuel López Obrador, has vowed to scale back the drug war and end the militarised approach.

Drug trafficking and the death penalty

There is no evidence that the death penalty deters people from drug trafficking. Conversely, there are several countries in which drug trafficking has increased while the state executed people for such offences.

In Iran, which has been one of the world's most prolific executioners of people for drug offences for decades, a senior judiciary official has noted that “the truth is, the execution of drug smugglers has had no deterrent effect”. In 2017, Iran passed legislative reform which has seen the number of drug-related executions fall by 99 per cent – and there has been no increase in trafficking.

It is also important to note that imposing the death penalty for drug offences is illegal under international law. Introducing this punishment would put Sri Lanka at odds with Article 6.2 of the International Covenant on Civil and Political Rights, which states that "In countries which have not abolished the death penalty, sentence of death may be imposed only for the most serious crimes". This terminology has been legally interpreted to mean only crimes involving intentional killing.

The poor suffer the most

In the Philippines, poor people living in slums bear the brunt of the government’s brutal drug war. In Mexico, some of the country’s poorest people get caught up in violence between cartels and the state – some forcibly recruited to fight or transport drugs. In Iran, “most of those executed for drug offences are not the real drug dealers but poor and marginalised people who are used as carriers for a small amount of money”, a human rights advocate says.

Similarly, if Sri Lanka goes ahead with its plans of executing people for drug offences, and deploying troops to carry out a militarised drug war, the poorest members of society are likely to face the harshest consequences. Sri Lanka’s plans to escalate the drug war will cost countless lives and huge sums of money, erode human rights, and do little to counter trafficking.