The Melancholy of Killercops in the Philippines Drug War (Part 3) What a Nice Family

Then it's Saturday again, a pretty hot day for the beginning of October.

Cerrado is driving to a resort outside Manila with Rozzy – his girlfriend, who is celebrating her birthday - and her parents, siblings, and cousins. Everyone meets Cerrado with respect and awe.

In a hilly green landscape, six bungalows form the complex that they’ll call home. Each bungalow consists of a large room with mattresses, and the windows are secured with bars. It's early in the morning, the family listen to gangsta rap and prepare the food. Cerrado is sweating on the grill. Everyone is still sober. But at lunchtime, the men will sit in the shade around a plastic table with litre bottles of brandy and gin.

It’s a miracle that Rozzy's father, her brothers, and cousins are sitting at this table with Nino Cerrado. He, the drug investigator. They, the criminal consumers. Cerrado claims that he does not hunt anyone anymore. The men at the table swore to Nino that they did not smoke anymore. And everyone agrees: the country has a drug problem but this policy hits the wrong people.

"I was on Shabu back then, too”, Rozzy interrupts and takes a sip of brandy. Today, she turns 29 years old. Fine, red veins pull through her chubby cheeks, fat laps over the hem of her hot pants. Two years earlier, Cerrado arrested her friend, a drug dealer. That's how he got to know Rozzy. During the interrogation she changed sides. Left her boyfriend, who has been in jail ever since, and from then on was with Cerrado, the alpha bull.

"I was wondering if he does it all because of me." Rozzy blows cigarette smoke into the air. When she met him, she and her cousins stopped smoking Shabu, she says.

Rozzy's cousin Patrick is by the pool and smokes. He wears white sunglasses and colourful swimming trunks. His skin is scarred by pimples and bruises. Under his chest, a thick scar stretches along. Blood once poured out after a knife was stuck in there. On his leg "Sigue Sigue" is tattooed with pen ink and sewing needles, the name of an old, big, powerful gang.

In his hip, a peso coin was once used to brand his skin. The symbol of a Brotherhood, as there are thousands of them in the country – mini-gangs, which are about loyalty and friendship. With the peso coin, Patrick was rewarded for his time in the Brotherhood, but at some point he wanted more.

"I committed a crazy crime," says Patrick. He had stolen a pit bull in his neighbourhood and resold it, but he ended up at the police station. There he saw the power of a Mayor, a boss of the Sigue Sigue gang. The Mayor collects visitor's taxes when families bring food to their relatives, he collects ransom money, he deals with cigarettes and drugs.

First, Patrick became the thug of the Mayor, then he took his position. He has never earned so much money as in jail. A cigarette costs up to 50 pesos ($0.96), so a carton can fetch $20.

In a police station jail, where Patrick was once held, the men stay a few months, a maximum of one year. They're crammed in between rusty bars, lying in hammocks or on the floor, playing cards and watching officials walking in and out.

Patrick was not in a city jail where men sit for thirty years or more. "There, over time, the gangs get so much power and money, they rule the whole country out of jail," he says. Still, Patrick does not want to go back to jail, he drives a taxi now. Sometimes, he drives to visit his brothers behind bars. "Bring them something."

Cerrado comes to the pool and gets involved. "We also had luxury prisons with whirlpools and whiskey, with brands you cannot find in any Manila store," he says in his tinny voice. "Until Duterte came." And then: "It's a bit like Colombia here, isn’t it? My friend?"

He sits on the edge of the pool and splashes his legs in the water. "The system is corrupt to the core." Once, after detaining a dealer, Cerrado and his colleagues found the culprit’s car parked outside with over a million pesos ($19,285) and 1.3 kilos of shabu in it. "So we took everything, the money, the car, and the drugs. My boss and colleagues would not accept it if I did not join this game.”

Again and again, Cerrado beats his left fist in his right hand when he says: "All the cards are lying open in front of us, but only the small fish remain. We cannot catch up with the big fish that pay us. They remain untouchable.” Despite the big show that Duterte puts on.

So they spend hours between grilled meat, brandy, and swimming pool until all are sitting in a circle in front of the mattresses in the evening to play drinking games. Silly games in a school dorm atmosphere – they seem like a normal family. Then they fall drunk on the beds and snooze away. 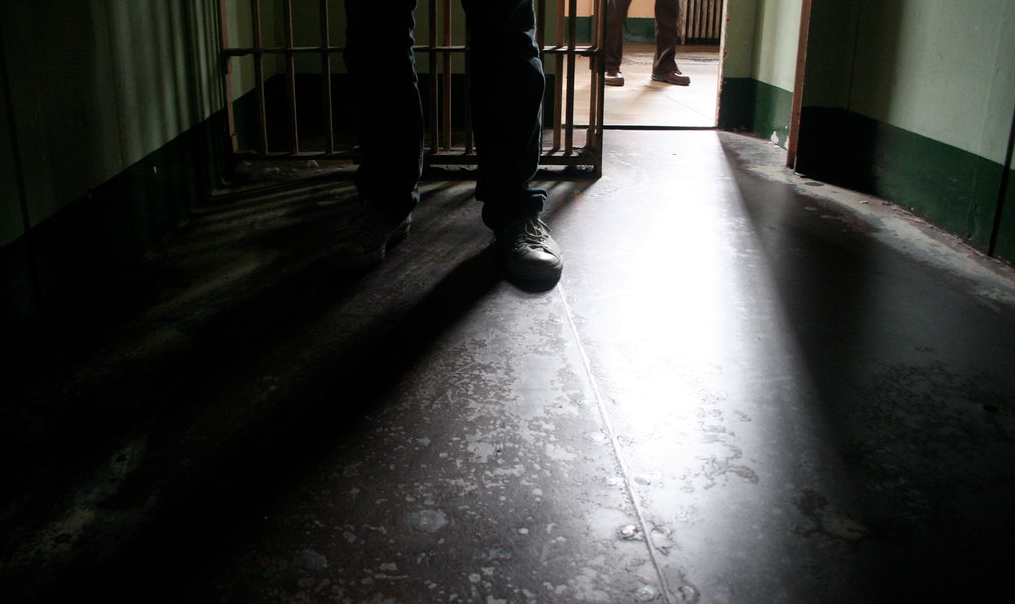 The Life of a Murderer

A few days later, a man crouches near a slum in a parked car. The hot steam of the shabu has made his teeth fall out. His eyes are two cloudy, brown puddles. His arms, his fingers, his chest are full of tattoos that look like the attempts of a kindergarten kid’s drawing. He calls himself Boy Tattoo, is supposedly 42 years old, and it takes him a while to understand the words of the translator. He's sunk deep into the backseat, nervously rubbing his fingers together. He is afraid. Nevertheless, he wants to share the story of his confused, destroyed life.

He does not remember his parents. He was a street kid in Tondo, he begged and at night he slept with other street children on a piece of cardboard. As a teenager, he began to steal and fight. At the age of 19, he was locked up for the first time - for six years – for killing a human being.

In jail, he was a bastonero first - the guy who beats another up on demand - before he swung himself to the boss, the mayor. Now he controlled the drug trade along with the police. When he came out, he sold cannabis. It went well for a few years. But then he was involved in a shooting. People died, and this time he was got sentenced to life in prison.

Eight years passed until an influential police officer stepped into his life and said, "I'll give you freedom if you work for me." Boy Tattoo knew it was his only chance. The police officer bribed the prison guards, freed him from the jail gang and hired Boy Tattoo to work as a dealer. He sold crystal-clear shabu for his boss, fine crystal meth, which keeps the upper class rushing through the nights. At first Boy Tattoo liked it, he was no longer a street pusher after all, but a real dealer, he says.

At some point, the policeman demanded another job: Boy Tattoo was supposed to kill a big shot trafficker, one of the police officer’s rivals. In conspiratorial apartments he was shown photos, given his murder weapon, and then driven to the scene. Often policemen accompanied him. Many were involved.

Boy Tattoo looks out of the car window. Over there, beyond the river, is the slum Tondo. His daughter and son live there, 14 and 15 years old. He cannot see them anymore. He had to flee the district.

Boy Tattoo wanted to become a police officer himself, be part of Manila's finest, that's what the police call themselves here. He sighs. "Instead, I became a hitman. And I will die as a killer. I have no choice." 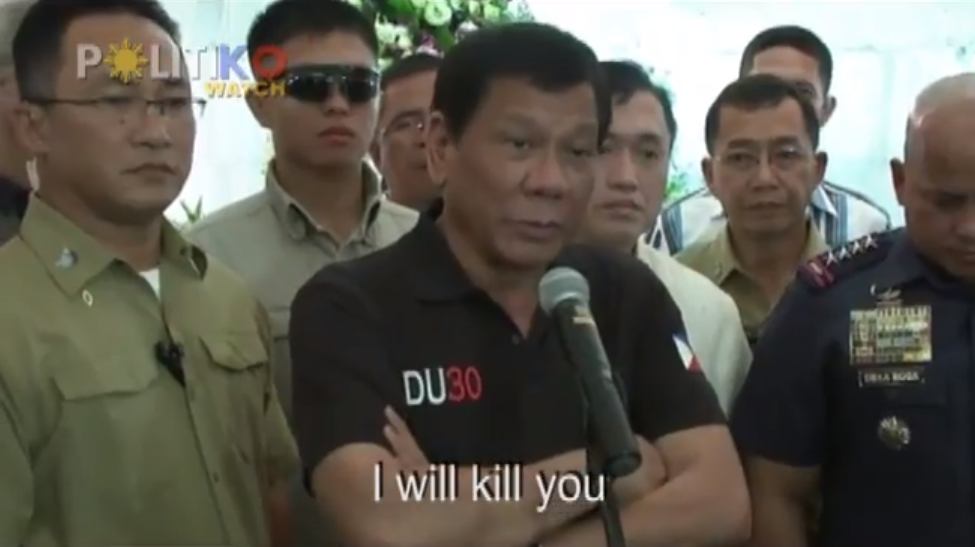 An Eternal Back and Forth

In the West, Duterte is either a complete idiot or a madman. Sometimes his vocabulary is lost in English interviews, sometimes he crosses his arms and makes wild threats in front of the camera. But he is a smart strategist. The political game he plays is as old as it is simple: he spreads fear. The Filipinos in the plastic flip flops got scared. Now they behave.

His second trick has often worked in history: He divides hostile groups against each other. In the poor neighbourhoods, everybody is fighting against everybody. The government, which apparently has no recipe for ending poverty, just needs to watch the poor fight each other. And the National Police is in control, with soft steps in the background.

As a result, the President can even afford to suspend the drug war in Duterte Land. That's what some call their homeland now.

Nino Cerrado comes later than anyone else to his girlfriend Rozzy's parents' house on this Wednesday afternoon, because he has been training with his old unit for the weekend of the Asean Conference, for the security of demonstrations. US President Donald Trump is soon driven through the streets. It does not take long for Nino Cerrado to half-empty the two-litre bottle of brandy while the family is sitting and listening around him, as usual. While dogs are barking in the background, children are playing with rubbish in the street, construction workers are building a prefabricated building between shacks, and jeepneys and buses on the main road are lighting a horn concert a few metres away.

At some point, Cerrado seems to have more or less arranged his thoughts, despite being drunk on brandy. He knocks on the table and says, "Either way there are important developments in this country ahead of us. Our President stopped the war on drugs and I'll soon be promoted to be Senior Police Officer."

He has to hide. Right now in this training. Then in another unit. Under a hard shell of machismo. Behind a fat curtain of alcohol. Caught in the system of corruption and self-justice, powerless, and forced to cowardice.

In the beginning of 2018, the government announced that Oplan Tokhang – the drug war crackdown - will continue, and there will be further knocks on doors. But this time they want to make fewer mistakes. For example, kill fewer innocent people. The people of Duterte Land have a proverb for such news: "back and forth – back and forth." An eternal back and forth.

Some weeks later, Nino Cerrado sends a short message: He has passed his exams. He is now a Senior Police Officer.

* Benedict Wermter is a freelance writer and crime reporter covering Germany and Asia. You can check out his website here, or reach him via benedict.wermter {@} gmail.com