Uganda demonstrates how a network can use the collective force of its members to impact national harm reduction policymaking, and support those that need it in communities and on the ground. Photos from the author.

Uganda Harm Reduction Network (UHRN) is a drug user led national network that advocates for practical interventions to support and address issues of people who use and inject drugs (PWUIDs) in Uganda. The network also acts as a national platform to promote good practices and advocate for a supportive environment for the adoption, implementation and expansion of harm reduction programs in Uganda. Our vision is a healthy and productive society of PWUIDs in Uganda, which we’re working to achieve by coordinating partner’s actions, building capacity of groups of PWUIDs, lead on research and creation of innovative harm reduction interventions in Uganda.

UHRN is a network of over 46 drug use serving organisations spread across the regions of Uganda. UHRN first started as an informal group of drug users in 2008, formally registering as a company in 2014 before becoming a nationally recognised NGO representing people who use drugs in 2020. We embarked on a mission to support other informal drug user groups around the country to formerly register as community-based organisations. UHRN empowered these grassroot organisations by training them in organisational leadership, financial management, resource mobilisation (nationally and internationally), conducting lobbying and political advocacy, how to produce impactful documents and reports. Additionally, we facilitate sub-grants to some of these organisations to empower them to deliver resources to their communities.

Fortunately we’ve had grassroots members that have benefitted greatly from our networked approach to action: these include the Harm Reduction and Reproductive Health Initiative in Western Uganda, which focuses on advancing sexual reproductive health and HIV care, especially for women who use drugs. UHRN has also supported Teens Link Uganda, an organisation that defends the health and human rights of young LGBTQ people who use drugs. Through UHRN’s mentorship, we’re proud that these organisations have attracted grants from prominent funders such as VIIV Health Care and USAID. 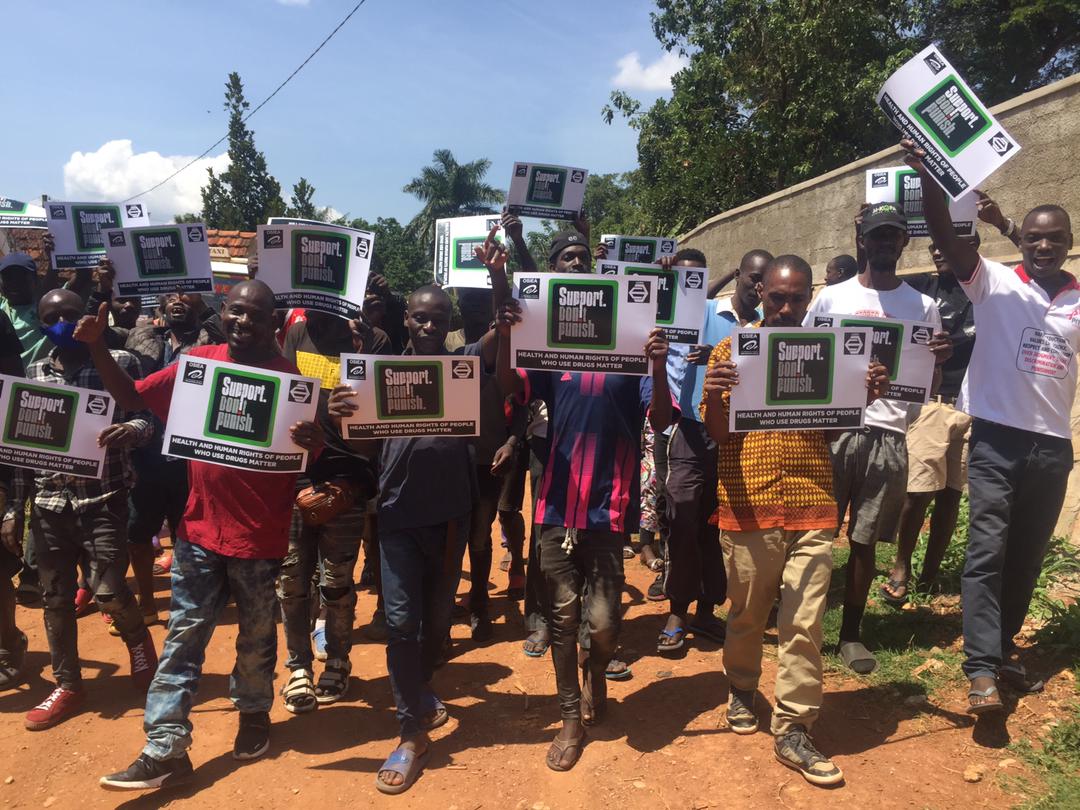 Over the years, UHRN has not only taken advantage of the networked model for joint advocacy and resource mobilisation, but also to refer and link people who use drugs to HIV testing services, legal aid, psychosocial services, among other services that may be needed. Through this model, UHRN has been able to increase its visibility in various communities, as well as develop several harm reduction guidelines for national use, like technical guidelines for universal access to HIV prevention, treatment and care for people who use alcohol or other substances, and piloting the community dispensing of buprenorphine through community drop-in centres, as well as needle and syringe programmes, to name a few.

We hope to be an example of how network forces can be used to connect smaller organisations in one country or region with another, building strength in numbers and collective action. This is an effective way to combatting ingrained ideas in society about people who use drugs, and having an impact on the ground by working directly within communities, which will usually have family members or friends impacted by the criminalisation of drugs and the stigmatisation of those that use them.

Although UHRN has had successful interventions through its network model, the legal environment against marginalised populations in Uganda has deteriorated since the implementation of the Narcotics and Psychotropic Substances Act 2016 which further criminalises drug use. This law pushes people who use drugs into the shadows. People who use drugs are afraid to talk and seek much-needed medical services because the government has positioned drug use as a criminal justice issue, rather than a public health one. In addition to this, the NGO Act 2016 has further affected registration of some of our network organisations, creating a series of legal obligations that encourage some of our members to continue operating in the shadows.

It’s important to note that, as much as UHRN has been able to support its 46 organisations, coordination of these network organisations is still a big challenge for the network’s secretariat. In addition, the majority of these organisations are still financially unstable, which creates further challenges in the way that they can work together and successfully impact the lives of people who use drugs.

Some of the critical issues the network is currently working on is ensuring that unregistered network members are formerly registered. This is so that we can continue, through joint advocacy, evidence generation and media campaigns, to create visibility and awareness on the needs and priorities of people who use drugs across Uganda, and continuously build the capacity of our network members to ensure they have the resources needed to continue to operate.

*Hope Atim is the Program Officer for the Ugandan Harm Reduction Network. Their work can be seen here, and you can follow them on Facebook or Twitter.